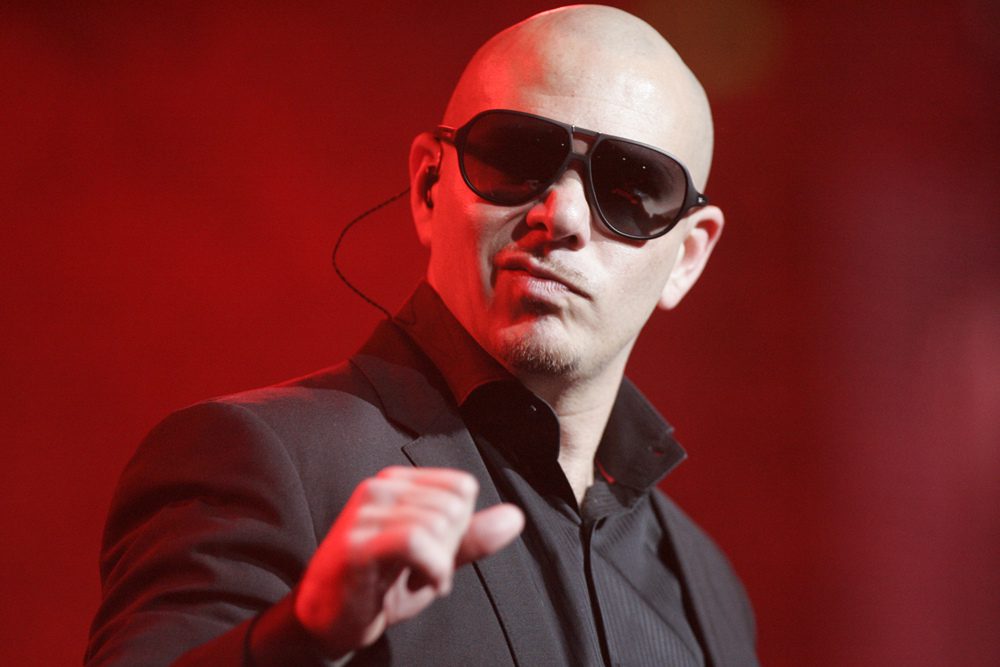 I really wanted to wait until the NBA Finals began to write this column, but I couldn’t run the risk of anyone beating me to the punch and writing it before I did. So here it is, a definitive rankings of all of the Playoff theme songs of the NBA on ABC era. First, three notes:

1: This idea is the lovechild of the 2015 go-to theme song for the NBA Playoffs on ABC/ESPN, “Awesome” by Will.I.Am or The Black Eyed Peas or the chicks from Pitch Perfect 2 or whoever. Regardless of who sings it, it is, and pardon my French, a fucking atrocity. I hate it. I didn’t think there was a scenario where the NBA Playoffs could be ruined, short of a Chilean soccer-esque plane crash taking out one of the competing teams, but being forced to listen to “Awesome” multiple times a night might do it. Anyway, it got me thinking: is this the worst postseason theme song in the NBA on ABC era?

2: Please note, this is the comprehensive rankings of just the themes for the NBA on ABC/ESPN, which assigned a specific song as its Playoff theme for the first time in 2004. This list won’t include anything prior to 2004 or any TNT themes. For what it’s worth, had NBA on TNT been included, they would’ve had the three top selections: “Burn It Down” (2012), “We Made It” (2008) and “Remember The Name” (2006). That’s a strong top three right there.

3: I tried to come up with some sort of criteria to use, but I’m not a music critic nor should I have to justify my selections for this rather pointless exercise, but this is what I scraped together and am calling a criteria:

A Good Beat: For the moment, forget about the lyrics … if you listened to an instrumental version of this song, could you get amped up to play basketball?

Lyrics: Do the words tell an interesting story or are it meaningless garbage?

Relevance to the NBA Playoffs: Does the story that the song is telling have anything to do with basketball or the NBA Playoffs? You won’t believe how many of these songs fail to get a check mark a category that should be of the utmost importance.

Catchiness: I call this the Mark Giuliano test. My Dad is notorious for whistling sports themes over and over again throughout a game. The best all-time examples of this is the March Madness theme. Naturally, themes like this are intended to be catchy and whistle-able. If an NBA Playoff theme gets stuck in my head to the point where I am either humming it or whistling it all night long, we can call it a win for the song.

Repeatability: Sort of like Catchiness, only Repeatability means you actually enjoy hearing it over and over again. Pharrell’s hit song “Happy” is catchy, but everytime I hear it I contemplate whether or not I should take a bath with a toaster over. If I can listen to the song over and over again, it will get a check mark in this category.

Historical Signifcance: Plain and simple; do I immediately think about the NBA Playoffs when I hear this song?

No more foreplay. Here they are, presented in order from worst to best.

Maybe this is recency bias kicking in, but I just can’t imagine that “Awesome” takes a turn for the better at any point during the Playoffs. The beat is blah, the chorus is exactly how an awkward teenager sounds during the first time he has sex (“Baby, Baby Baby, Baby Baby, Baby Baby, This is Awesome”), and naturally, there is no discernible connection to basketball or the NBA Playoffs, unless I’m the only person who didn’t say to themselves, “Oh, when Will.I.Am. says ‘I’m ballin’, that makes this a basketball song … got it!”

Alright, alright … I hear ya. This song is actually worse than “Awesome.” Like I said, there is definitely some recency bias in play here. If this exercise was done last year or if it’s re-done ten years from now, “Right Now” would have been or will be deemed the worst NBA on ABC/ESPN promo song ever, and possibly by a wide margin. And if YouTube ever shuts down and all videos of Nicole Scherzinger dancing around in a tight basketball jersey-looking dress are never to be seen again, people will wonder why exactly this song was ever produced in the first place. The worked in basketball references (i.e. “It’s time to make a stand” and “Don’t leave me in the post”) will only further the confusion.

Maybe this ranking reveals a mental block that I have with the more recent work of will.i.am/The Black Eyed Peas. We can all agree that they peaked in 2003-2005 and that it all went south after Fergie left the group to tell us that “Big Girls Don’t Cry.” The best part of the song is every Justin Bieber verse, and that’s a problem in and of itself. But I think the video is the biggest reason for the low ranking. Can’t you imagine a nine foot hoop being rolled in for the shoot, only for will’s publicist to storm onto the set and let everyone know they needed to lower it down to 7’6″ for him to be able to dunk it?

The NBA: Where music from the 1970s is used to hype a 21st Century sporting event happens.

The NBA: Where new music from a band that peaked in the 1980s is used to hype a 21st Century sporting event happens. And by the way, who the hell would say “get on your boots”? Isn’t it “get your boots on”?

The NBA: Where a Nicole Scherzinger remake of a 1971 song is used to hype a 21st Century sporting event happens.

Served up on a silver platter for me to make a Where Tim McGraw teams up with a 1980s band to make a song that is used to hype a 21st Century sporting event happens joke, but this is actually the first song on this list that I enjoy. Points are docked because I don’t remember this song ever being a part of the NBA Playoffs, but points are returned because I can actually see why it was. Am I wrong to say it’s a good song? At it’s core it isn’t a sports song, but instead of misfiring on an attempt to make it one by doing some sort of cheesy Playoff remake, the best verses are pieced together and it actually masquerades itself as a song that is about basketball.

The whole concept of “nine lives” applies itself quite well to Playoff basketball since it isn’t a single elimination sort of format. You have a lot of lives to play with in the postseason. There are certain elements of “luck” and “toughness” that come into play in the Playoffs too. Injury luck, officiating luck, lucky bounces … and I’m actively talking myself out of this song. Let’s move on.

Hey, speaking of cheesy Playoff remakes … look no further Pitbull and Kesha’s Playoff edition of “Timber”, where Mr. 305 says the word Playoffs thirteen times in 53 seconds. Quite a feat. As you can see from its ranking, I’m a pro-Timber guy, though. The postseason references are more on point than any other pop song that has attempted to work them in (I particularly enjoy the “Bigger the heart the harder they ball” verse) and the beat is among the best of any ESPN/ABC appointed Playoff theme. A year later if “Timber” pops up on the radio, before I change the channel it still gives me flashbacks of the 2014 Playoffs. So at least it’s holding up well.

2006- “Runnin Down a Dream” by Tom Petty and The Heartbreakers

It’s not a sports song, nor does it even try to splice up the lyrics in some tricky way to become one. It was released in 1989 and doesn’t really lend itself all that well to the sport of basketball, yet I’m a fan of this Tom Petty hit. The heavy use of guitar is a nice change of pace from what the status quo is today (typically some sort of house/pop beat) and the idea of “running down a dream” is an original concept that can definitely be applied to the NBA Playoffs if you think about it for a second. Is it ideal for a Playoff theme to require a few moments of thought as to whether it even makes sense that it was selected? No, definitely not. But when you spend multiple hours working on a column like this, you develop an appreciation for it.

Now this is a song that you might have actually heard on some warm-up CD’s in high school gymnasiums in 2012 and 2013. It comes out of the gate with a couple of strong verses (“My only fear, is what might happen, if I didn’t fight to win!!!” AND “If I lose, then it was worth fighting for. If we win, we only live to fight again!!!”) and things only drop off slightly when Cee Lo turns things over to the Goodie Mob, whoever the hell they may be. I want to focus on those first two verses though. They encapsulate what the NBA Playoffs are about more than any other ones from any other song on this list, with the possible exception of everything the Pussycat Dolls said in “Right Now.” Plus, how cool is it that the primary artist featured in this song is the same shape as the ball used in this sport? A singer and a mascot all rolled into one big, round ball of fun.

So what’s working against it? Well, even though it lent itself well to the NBA Playoffs it isn’t a basketball song and by the time the 2004 Playoffs ended I remember not wanting to hear “Let’s Get It Started” again anytime soon. “Let’s Get It Started” is probably the most memorable Playoff theme song, but it’s not the best one.

After thirty minutes of intense searching on the line, I gave up on trying to find any sort of 2005 NBA Playoffs intro video with “This Is How A Heart Breaks” featured. This song didn’t try to pretend to be anything it wasn’t. It didn’t try to pretend to be a basketball song. It’s a song with a great beat and catchy lyrics that can vaguely tied to the drama of the NBA Playoffs. It was typically only ever played over tense highlights from previous games, a nice niche for a song like this. The focus of the song- I guess it’s a heart breaking- applies itself to many Playoff moments, including the most memorable one of the NBA Finals; Detroit losing Game 5 in absolutely heart breaking fashion due to a Robert Horry three pointer with 5.9 seconds left in Overtime after Rasheed Wallace left him to double Manu Ginobili in the corner. I feel bad about not having any sort of ESPN/ABC Playoff intro featuring “This Is How A Heart Breaks,” so I present you two alternative options:

First, the official music video for “This Is How A Heart Breaks” where Rob Thomas is being chased through a big city by a mysterious hooded figure for God knows what reason. I can’t even venture a guess as to why he’s being chased, because when the figure finally catches him the video ends. Baffling. I’m left wanting a part two. However, if this doesn’t tickle your fancy, you could check out a video recorded back in 2011 of my buddy Collin and I lip-syncing and dancing to this song in the bathroom at a Niagara Falls bar.