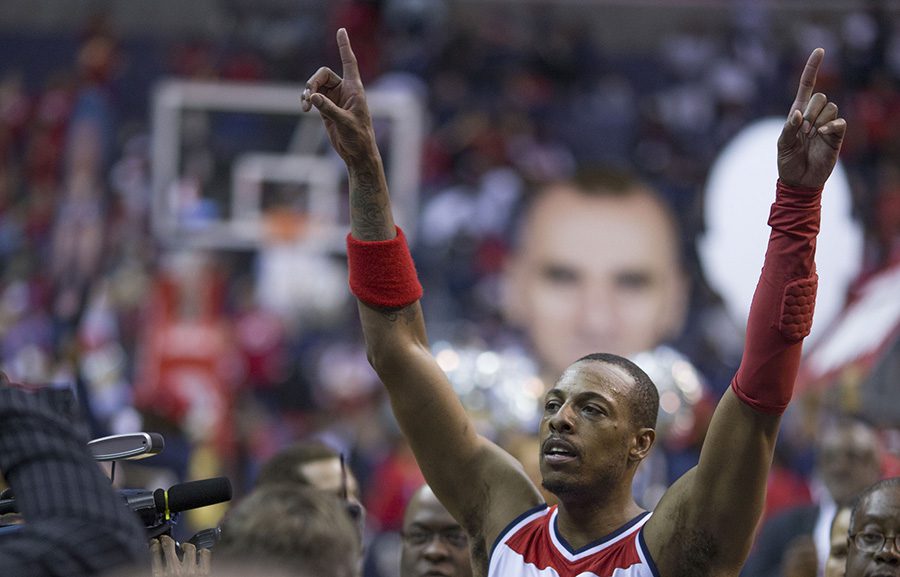 One of the following statements is untrue:

1) Will Bynum hit a pair of clutch free throws to give the Washington Wizards a three-point lead with a couple of seconds remaining.
2) Mike Muscala hit a three on a play breakdown to tie the game at 101 with 14.1 seconds remaining.
3) Drake has converted to rooting for the Wizards and was at the game giving out free lint rollers to fans.

Okay, you think you got it? Yep, that’s right Game 3 of the Eastern Conference Semifinals featured crunch time minutes from the likes of Will Bynum and Mike Muscala, in what can only be described as a funky game. But, as the collective basketball world tried to grapple with what had transpired over the past 48 minutes, Paul Pierce stepped in (again) to save the day.

His long two over the hands of three different defenders as time expired sealed the win for the Wizards who have taken a 2-1 lead in the series versus the Atlanta Hawks.

But it shouldn’t have been that hard for the Wizards.

Without John Wall, the Wizards exploded out of the gates, taking an early 11-4 lead, behind the formerly struggling Nene. The Big Brazilian brought a new hairdo and a new game to Verizon Center on Saturday night — Nene was aggressive from the get-go and made 4-of-5 shots in the first quarter after going 0-for-9 in Games 1 and 2 combined.

The Wizards continued to get healthy contributions from a number of guys: Ramon Sessions has performed admirably in the absence of John Wall, Bradley Beal continues to shoulder a lot of the offensive load, and Otto Porter continues his emergence as the biggest X-factor in the NBA Playoffs.

Meanwhile, the Atlanta starters, which helped lead the Hawks to a 60-win regular season, struggled all night. Besides Kyle Korver, who hit his first two attempts from deep, the rest of the Hawks starters shot an abysmal 4-for-19 from the field.

Things never really got much better for the Hawks who are simply missing a lot of uncontested shots they hit during the regular season. In many respects, it felt like something out of Freaky Friday — the Wizards moving the ball, with 27 assists for the game, and five guys scoring in double-digits (with two others not far behind). On the other hand, the Hawks looked out of sorts missing bunnies in and not moving the ball with the same wicked speed that made Atlanta so successful during the regular season.

As for the Wizards, it’s by no means over yet. Without John Wall, the rest of the series will be a test. Coach Randy Wittman has had to dig a little deeper into his bench for contributions, but he can find solace in knowing that if his Wizards can stay within striking distance until the end, Paul Pierce can finish it up.