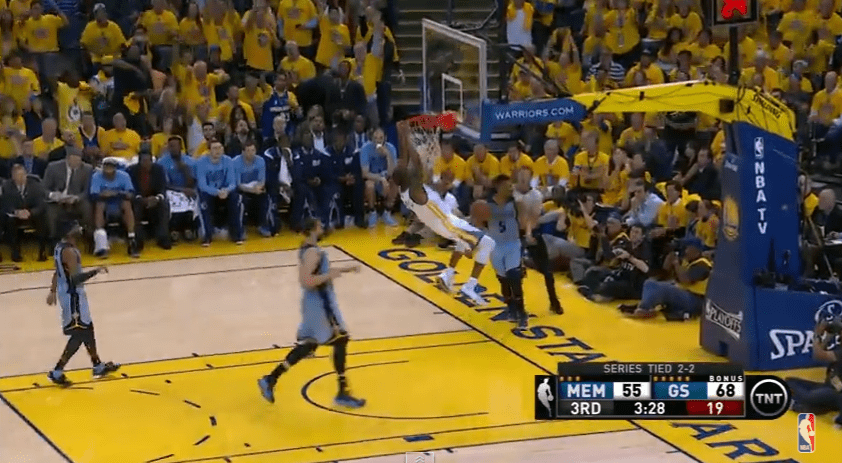 The Golden State Warriors escaped a rough start to defeat the Memphis Grizzlies by a 98-78 score. This largely came as a result of Golden State drilling 14-of-30 three-pointers. Stephen Curry banged six himself on the path to his 18 points and six steals. Klay Thompson led all scorers with 21, 3-4 on triples, while the Warriors also benefited from Harrison Barnes and Andre Iguodala combining for 30 points. Barnes and Iguodala are rightfully viewed as x-factor type of players for the Warriors.

Memphis asserted its will early on. The team made the tactical decision to regularly feed Zach Randolph in the post. His first quarter production controlled the tempo as Golden State’s home crowd was held in check. For reasons inexplicable to most viewers, the Grizzlies stopped finding Randolph. They opted for questionable Vince Carter threes, contested Marc Gasol mid-range jumpers, and aimless possessions with poor floor spacing. It’s odd that Memphis stopped utilizing a method that worked. Randolph had 11 points at halftime, most of which came in the first, but finished with just 13.

The misconception about Golden State is that Curry and Thompson shooting from deep is the team’s primary point of production. Arguably as important is the collective defense of Andrew Bogut and Draymond Green, excellent post defenders who have done quality work against Randolph and Gasol. Thompson himself is also one of the more dynamic perimeter defenders in the NBA. Holding Memphis to 78 points while banging 14 threes speaks to the balanced nature of the Warriors. This isn’t a Don Nelson run-and-gun unit, it’s a machine-like squad who excels most when its defense is sharp.

Fans of Memphis may point to Tony Allen‘s absence as a factor in this loss. That unquestionably hurt the Grizzlies on the defensive end. He could’ve taken turns on Curry and Thompson. However, with Jeff Green or Carter in the lineup, Memphis can space the floor better. Green had his chances in Game 5, going just 5-for-13 in nearly 28 minutes. Carter only went 3-for-10, and Courtney Lee had a mere seven points. The perimeter players who needed to step up in Allen’s absence were unable to do so. It would be hard to imagine Allen not be playing in Game 6 back in Memphis.

On the Warriors’ end of the equation, Golden State has recaptured its identity over the past two games. Harrison Barnes has been the beneficiary of increased touches, the bench production has taken a leap forward, and every player is active defensively. With these factors combining with the production of Curry and Thompson, Golden State resembles a 67-win regular season squad. Game 5’s result also ensures that Memphis will have to win this series in Oakland. Plenty of regret should be had for the Grizzlies dropping back-to-back games after commanding a 2-1 lead.