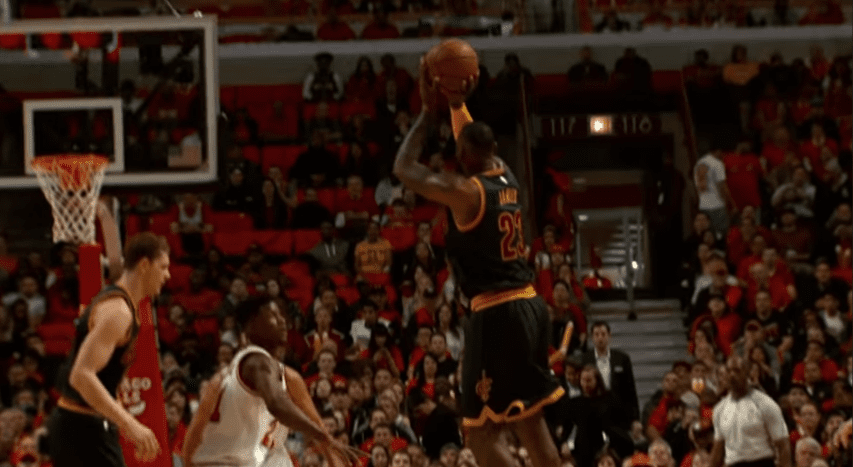 LeBron James has an immaculate record in potential Game 6 series clinchers for his team. If Game 5 was a preview of what James has in store for the Chicago Bulls and a national TV audience, then that record would remain excellent. Despite the great play by Bulls forward Jimmy Butler, LeBron had his way in the paint in Game 5 on his way to a 38-point muscle show. I was positive King James would unleash his entire bag of tricks to prevent this series from going to a Game 7.

The Bulls they have been leaning heavily on the offense of Derrick Rose and Butler. With Rose only scoring two points in the second half of Game 5, that crutch broke and the offensive woes helped the Cleveland Cavaliers seal a tight victory. The Bulls were hoping that power forward Pau Gasol would return to the lineup after missing two straight games with a hamstring injury. His absence has been felt under the rim for the Bulls. Most important of all, the Bulls needed a third offensive option to last them an entire game. They’ve had Dunleavy for a half or Tony Snell for a quarter, but they needed a consistent third player to score because the defense has been more than adequate to win this series.

The starting squad of the Cleveland Cavaliers remained the same as the entire series with Iman Shumpert starting over J.R. Smith. Shumpert has been excellent since he has started, hitting big three pointers and playing his role perfectly to keep his team ahead in the series. The scoring absence of Kevin Love has been filled by Shumpert but the rebounding effort all goes to one man, Tristan Thompson. His work on the glass this series has been astounding and he showed no signs of letting up on the boards. Without Gasol, the Bulls would surely have suffered even more at the rebounding hands of Thompson.

Sure enough, facing elimination at home, Pau Gasol would return to his team. After missing two straight games, his return will be welcomed for more than just his ability to score. He was supposed to help with LeBron in the post as well as possibly slowing down Thompson on the boards. The rest of the starters reamined the same for the Bulls. With Taj Gibson back on the bench, coach Tom Thibodeau could pick and choose when he releases Gibson on the smaller bench of the Cavs.

Gasol would show us how happy he is to be back by hitting the first shot of the game. Again, like they have for most of the series, the Bulls came out energized and began scoring early and often. But the Cavaliers would not sit idle while the Bulls attempted to grab the reigns of Game 6. It was clear Cleveland would deploy the same game plan as Game 5 by putting James in the post which in turn would create opportunities for his teammates. James was off early so this tactic was abandoned because of a Bulls turnover that would lead to a monster one-handed slam by Gasol and a timeout by Cavs head coach David Blatt.

Out of the timeout, LeBron’s first mate Kyrie Irving would hit two difficult shots, both of which the net didn’t even move. If Irving continued this pattern the Bulls would most certainly have a long night ahead of them. Although the score was tied with four minutes to go in the first quarter, it seemed as if the Bulls were firmly in the driver’s seat of the game, and their home crowd was the engine keeping them going.

With the smaller bench of Cleveland beginning to enter the game, Thibodeau would release his pit bull that is Taj Gibson. Unfortunately for the Bulls, Gibson got himself three quick fouls which killed the plan to give Gasol some rest. So instead Thibodeau would go with a smaller lineup, with Mike Dunleavy at the power forward position, to answer that of the Cavs.

To end the quarter Cavs, bench magician Matt Dellavedova threw a wonderful alley-oop to Thompson who would finish masterfully to get fouled and convert the and-one. The opening quarter ended with easily the highest combined score of any quarter this series at 64 points.

Aaron Brooks would assist on a layup to Nikola Mirotic to open the quarter for the Bulls, showing signs of life for their team that has been pleading for their normal output all series. Miriotic would explode off the bench by hitting another shot and setting the home crowd into a frenzy. Immediately following the play, Kyrie Irving would go down to the floor and need assistance to get off the court. If Irving was to go down for the game it would be a catastrophic loss for the Cavs who were already missing 1/3 of the big three in Kevin Love. The entire state of Ohio was silent.

Mirotic would continue to be clutch for his team with a third consecutive bucket. During this stretch of the game I found myself almost ignoring the score. The product of basketball that was on my television screen with eight minutes to go in the half was mesmerizing and a score would only ruin it. For all professional purposes, it was Bulls up one 39-38.

Missing Irving was starting to negatively effect the Cavaliers’ offense. With LeBron becoming the point guard, he was not getting himself into the paint. In turn the Bulls were able to abandon the help defense that was leading to open looks for other Cavaliers. The lack of scoring was putting pressure on James and the defense on him by Butler was extraordinary which led to a low shooting percentage in the first half for James.

Even when Mirotic wasn’t scoring, he was getting the crowd involved. When Iman Shumpert attempted to drive by Mirotic, he answered by putting a forearm to his neck and Shumpert went down. Mirotic trotted down the floor with his finger in the air causing the home crowd to go ballistic. Regardless of the fact that it was a flagrant one, it was a hard playoff foul that can sometimes energize a team. With four to go in the half and being down four, it could have done just that for the Bulls. It didn’t.

The Cavaliers would cap off a 12-0 run with a Shumpert three, fittingly in the face of Nikola Mirotic. That made shot would lead to a Thibodeau timeout. Rightfully so because the hard foul on Shumpert was beginning to backfire. Rose would hit a baseline bank shot after the time out that he has consistently converted throughout this series with little resistance. The Bulls looked like they would cut it close before half until Smith and Shumpert would coaxed two three’s into the net that would give the Cavs a 13-point lead and quiet the United Center.

In the final seven minutes of the second quarter the Cavs went on a 20-4 run. In each game of this series, the Bulls have had a stretch of poor shooting but this one was easily the worst. The Bulls would head to the locker room down 14 and a lot would have to change for Chicago not to be eliminated from the playoffs. Maybe the scariest part of the deficit was LeBron James only had six points. There was no way that would last for the King. He was filling his stat sheet but there is no better scorer on Cleveland than James. They would eventually need him to do just that. The game’s scoring leader was Rose with 12 points at half. The surprise was the 11 points by Shumpert and 10 points by Thompson. With Irving’s return in question, they would need to continue their scoring trend for the Cavs to be the first team in either conference to reach the Conference Finals.

The Chicago Bulls would continue their scoring drought that would finally come to an end three minutes into the second half. The Cavaliers were beginning to have a scoring issue of their own, giving the Bulls a window of opportunity. For a reason unknown to myself, the Bulls could not take advantage of such chance because they literally could not score the basketball. It was as if there were invisible lids on both baskets.

Easily the most amazing thing about this game was the rarity that was LeBron having four fouls only halfway through the third quarter. Four fouls in a game almost never happens to James let alone four by the third quarter. This was a foul that very easily could have changed the dynamic of the game. If the Bulls switched James to cover a big man, they could force him into more foul trouble or even better, make him play physical defense. Opportunities were apparent for the Bulls, would they capitalize?

Two extremely difficult turnaround jumpers by LeBron would prove that his shooting troubles have corrected themselves. It was a 16-point game with the quarter coming to a close, and James was starting to hit shots. The timing for the Bulls could not have been more imperfect. With the season on the line, the King began to put pressure on the neck of the Bulls like a boa constrictor suffocating its prey.

If the Bulls were catching fire, you could just call firefighter J.R. Smith. Chicago started to push the pace and score consecutive baskets with the third quarter just about over. But Smith would have none of it. He hit two crippling three pointers that kept his team’s lead at a comfortable 13 by quarter’s end. The season was on the line for Butler and the Bulls. How would they respond with their season in the balance?

Matt Dellavedova. Before this series no one casual fans knew his name, but they will after his commendable series. Not only the series but Game 6 in particular. You could call him a matador because he was killing the Bulls. A hypnotizing spin move sent Brooks flying would open up a runner. He followed that up with back-to-back three pointers to propel the Cavs lead to 22. It was a blowout and Dellavedova was the leading scorer throughout it.

With five minutes remaining in the Bulls season, TV cameras were showing the long faces of Bulls players sitting on the bench. During foul shots you could see hoards of fans heading to the exit as if there was a fire in the seats. The red seats of the United Center resembled scabs. While some faithful remained, the tops of the empty red chairs scattered throughout the stands exposed the gashes left in the Bulls by the overwhelming play of Cleveland.

Even though the Bulls had the exact roster they have wanted all season, they could not slip by the superior play of the King and his court. Being one rebound away from his second triple-double of the series James proved he knew what to do for his team exactly when they needed it. With the final game of this entertaining series being so one sided, it raises the question: Even without Love, are the Cavs the team to beat for the championship this year?