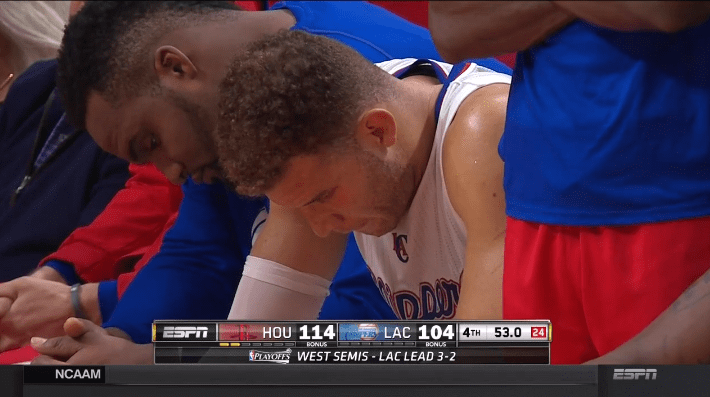 The Los Angeles Clippers yet again had another opportunity to close the series against the Houston Rockets. This time, they were at home, which assumedly gave them the advantage. Nevertheless, Houston won in a 119-107 shocker.

With the Los Angeles Clippers in the familiar setting of Staples Center, the same place where they won a nail-biter Game 7 against San Antonio, one would think that they had this series all wrapped up. Yes, they blew an early Game 5 lead in Houston and allowed the series to be extended, but ending the series at home would make the victory that much sweeter.

And that’s how it looked for about three quarters.

The Clippers started off surprisingly cold, missing their first three shots. It seemed uncharacteristic. Even J.J. Redick missed an easy layup. Their drought didn’t last very long however, as the Clippers grabbed the lead and ran with it. With three minutes left in the first quarter, the Clippers had a demanding lead of 20-13. Their offense at times seemed more fit for an All-Star game than an important playoff game.

Dwight Howard found himself in foul trouble early on. Most of the other games in the series have essentially been determined by early foul trouble on the opposing team’s respective center. If the Rockets won, DeAndre Jordan probably spent the latter part of the first on the bench in foul trouble. If the Clippers won, Dwight Howard was unquestionably sitting while his team struggled in the paint. Howard did grab a pair of fouls, but he declined to sit out. He knew the importance of this game.

McHale begrudgingly allowed him to stay in and it paid dividends. At the end of the game, Howard had a 21 total rebounds that allowed Houston to control the glass both offensively and defensively. The Rockets team as a whole had more rebounds than the Clippers (41 to 60). What’s more, Houston deprived Los Angeles of any offensive boards. While the Clippers grabbed 13 offensive rebounds in Game 5, the Rockets limited them to a measly 4.

Still, at the end of three quarters, the Clippers were up 92-79. Most fans decreed this game over and began envisioning a Western Conference Finals featuring the Clippers and either the Golden State Warriors or Memphis Grizzlies.

At this point in the playoff narrative, the casual fan has been accustomed to seeing Austin Rivers as a contributing member of the Clippers. No longer the unbecoming scrub of the league brought to Los Angeles, Rivers has taken advantage of defenses in both series. In the series against the Spurs, he finally came out of his shell. Now in this series against the Rockets, his performances are expected.

But all throughout the series, Houston has its own sob story inverted into the Rockets’ saving grace in Josh Smith. Smith was cut from the Detroit Pistons and essentially blacklisted by all teams with the exception of Houston. His Game 6 performance in the fourth quarter essentially gave fans temporary amnesia. Smith had 19 points off 5-9 shooting, but his 4-7 three-pointers fueled the momentum that the Rockets used to soar with the lead.

The Houston Rockets took control of the game especially in the fourth quarter. The team scored a whopping 40 points in the fourth, 14 of those attributed to the stellar performance of Josh Smith. Give that man a max contract (just kidding).  Whats more, the Rockets’ leading scorer in James Harden didn’t contribute much to the gain in momentum and lead. While the rest of the Rockets were still hot in the fourth, head coach Kevin McHale decided to keep Harden on the bench and the organic offensive production flourished as a result.

In comparison, Los Angeles Clippers only scored 15 in the fourth quarter—and all of that was in the first six minutes. As the lead slipped away from the Clippers, their offense seemed to force ill-contrived decisions. When someone got an open look, they opted to pass for a better shot. Only in most cases, it wasn’t a better shot; the Clippers were paralyzed. Still, with a smidgen of hope to grab the lead, the Clippers succumbed to the miraculous run by Houston. Their body language showed it even before the ending buzzer sounded.

Heading back to Houston for Sunday’s Game 7, the Clippers need to wash away any bad taste in their mouths from an embarrassing loss. They need to present their own in-game heroics in order to win yet another Game 7. If not, they’re out and they’ll be seen as the basketball saboteurs fans have grown to overlook throughout the years.