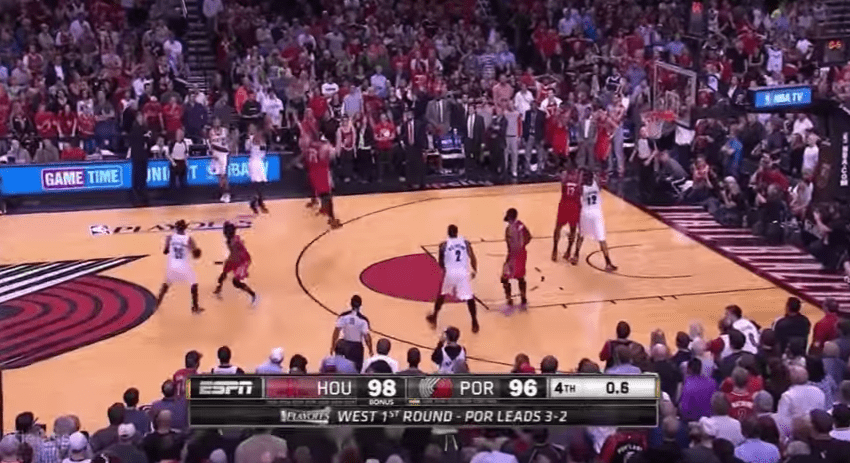 Last Friday in my NBA Playoffs Stock Watch column (which will be making it’s return next Friday), I mentioned the idea of possibly running a column on the Greatest Playoff Shots of the 2000’s over the summer. Then, quite appropriately, this happened:

I took those four last-second finishes and figured they were signs from the basketball Gods to write this column ASAP. And that’s exactly what I did. So buckle yourselves in and keep all hands and feet inside at all times. We’re going on a trip down memory lane, and sorting out what the greatest Playoff shot of this millennium is. First, the criteria.

Each shot is judged on the following criteria, and given a number grade of 1-10 in each category.

Before we get to the top ten, here are the shots that narrowly missed the cut:

Stakes (6.5): If LeBron doesn’t bury this dagger into the heart of the Bulls and all of their fans, Chicago, who had all of the momentum at this moment in the game, would have more likely than not won in overtime, putting them up 3-1 in the series. As far as 2nd Round stakes goes, this is right up there. And how about the personal stakes for LeBron? Just imagine how many idiotic Maybe LeBron really isn’t clutch hot takes there would have been if Cleveland lost this game.

Degree of Difficulty (6.5): Jimmy Butler could have gotten a better contest on the shot, but LeBron broke to the corner quickly and got off a cleaner look than he really should have in that situation. Still, a fall-away-foot-on-the-line jumper, in a game where LeBron couldn’t buy a bucket outside of the paint, is a tough enough shot.

Crowd Reaction: (6.5): Just so everyone knows, it’s a whole lot harder to gauge the crowd reaction when it’s a home team on the shit end of the shot and the crowd just ends up deflated. In the instances where it’s a home team getting the win, it’s easy to assign a number ranking. But how exactly do you judge deflatedness? (I feel like there is a Patriots joke to be made here). Anyway, it’s not like the United Center was giddy while Cleveland was inbounding. There was definitely a nervous tension in the air, and when LeBron buried the jumper it just got quiet. That’s the case for most of the road wins on this list.

Announcer Call (6): On a Mike Breen scale, this call was actually pretty mediocre. Neither of the vintage Breen catchphrases–Bang! or Puts It In!–were to be heard. It was just a simple “It’s good!” that was underwhelming considering the moment. His call of the Derrick Rose Game 3 game-winner was much, much better.

Intangibles (7): To my recollection, in my nearly two years with my girlfriend Maria, this was the first time that she looked at me like I was a crazy person because of the result of an NBA game. Let’s just say she probably wouldn’t be with me right now if she saw how I reacted during the 2013 NBA Finals. Anyway, how about David Blatt’s two near-blunders. First, he almost pulled a Chris Webber after Derrick Rose’s game-tying lay-up, and then he drew up an inbounds play with LeBron as the inbounder. Savvy. Luckily, Coach LeBron vetoed the play call. And for what it’s worth, this could end up higher on the list if Cleveland, despite all of their injuries, wins an NBA Title. This will be looked at as a shot that saved their season.

Stakes (5): Relatively high stakes for a Round One series, but it’s hard to say so much was on the line with this shot considering we know how the series played out. A miss in this situation leaves the series at two games a piece, and Phoenix probably closes it out in six games. Instead, Bryant buried the jumper and put the Lakers up 3-1 in the series, on the verge of pulling a colossal 7 over 2 upset.

Degree of Difficulty (6.5): You have to look at a little more than just the shot for this one. With just six seconds left, Luke Walton won a mid-court jump ball, which Kobe had to chase down. By the time Kobe gets his hands on the ball, there are 4.7 seconds left and he’s on the opposite side of half-court. So in those 4.7 seconds, Kobe had to get to the Chris Paul Comfort Zone (the right elbow) and get up a jumper than was contested by two defenders.

Crowd Reaction (8): Once Kobe got the ball, you could hear a roar building in the crowd up until he drills the buzzer beater and then everyone in Staples, Jack Nicholson included, just goes ape shit.

Announcer Call (7): Breen was on the call and he inserted a well-placed “Bang,” but my favorite part of the call is how he remains quiet after the shot, letting the crowd noise and the pictures tell the story. An underrated part of being an announcer is letting the moment speak for itself sometimes.

Intangibles (6): Points are deducted because the Lakers would go on to lose the next three games in the series, but two unintentional comedy moments have to be mentioned. First, Kobe’s shirt tug is just as iconic at this point as it confusing why he did that in the first place. Second, and more importantly, pause the video at the 3:03 mark to see Sasha Vujacic try to kiss Kobe. Okay, okay. He doesn’t really try to kiss him, but Kobe and Sasha share a legit moment in the midst of all of that pandemonium.

Stakes: (5.5): Portland was down by one before the shot, and if they dropped Game 6 at home then the series would’ve went back to Houston for Game 7, and the success rate of road teams in Game 7’s isn’t great.

Degree of Difficulty (6): Tough to get a shot like that off in 0.9 seconds, especially with your momentum carrying you into the sideline. But this is probably a shot Lillard has practiced thousands of times.

Crowd Reaction (7.5): A really cool crowd reaction if you really pay attention to the noise level as things are happening on the floor. There are just nervous murmurs coming from the crowd when Batum gets the ball to inbound, but as Lillard comes sprinting toward the ball clapping (an under the radar great aspect of this shot), just listen to the crowd start to buzz. It gets louder and louder as the ball is traveling through the air, and then it’s a burst of noise when the shot went down. Good stuff.

Announcer Call (8): Tirico absolutely owns this call: “It’s Lillard, HE GOT THE SHOT OFF!” That’s what he said before it even went through. It peaks there. Just imagine how anti-climactic the call would have been if the shot didn’t go down. It’s like he called it knowing full well that Lillard was burying it. Tirico was excited enough to make the call memorable, yet coherent enough to add in, in rhythm, that this was the first Blazers Playoff series won in 14 years.

Intangibles (6.5): A near perfect reaction from Lillard. He was clapping for the ball as he was coming to it, and you could just tell he knew it was going down after he released it. It was a great way to cap off a sensational series, but in the process it inadvertently created the notion that Lillard, not Aldridge, was Portland’s top dog.

Stakes (6): That’s the highest amount of points I decided I could give Round One moment. The game was tied, so it’s not like this was a do or die shot, but it’s a Game 7 and Chris Paul’s personal stakes might have been higher in this moment than any other player’s have been in a Round One game.

Degree of Difficulty (7): Five out of ten times, this contested shot is probably blocked by Tim Duncan. Ten years ago it definitely would have been. But the fact that Paul got this shot up, from the hip, over the outstretched arms of Duncan is incredible.

Crowd Reaction (7): The Clippers crowd was delightful during the series and their excitement carried over after San Antonio called a timeout after Paul’s bucket, but their initial reaction to the make was underwhelming. It was almost like they were still expecting they’d lose the game, until they snapped out of it and realized “Holy crap, we might have just seen one of the greatest Playoff moments ever. Let’s yell really loud!”

Announcer Call (6): It’s nothing too special from Harlan, but there isn’t anything really wrong with it either. I guess I just expect more from a guy who has popularized the phrases “Right between the eyes!” and “He’s a flamethrower!” over the years.

Intangibles (7.5): In case you missed it the first time, Blake Griffin almost killed himself going up for a potential put back. If Blake had seriously injured himself careening towards the basket like a madman, it would’ve have really put a damper on the end of a tremendous series. Instead, the series goes down as one of the best ever, that was capped off by a ridiculous Game 7 (one of the all-time greats) that featured four clutch free throws down the stretch (two from Paul and two ice cold free throws from Duncan) and a game-winner with one second remaining. And in case you were wondering, the legacy of this shot continues to grow the further the Clippers advance in the postseason.

Stakes (7.5): It’s Game 7 of the 2nd Round and Dallas was on the verge of choking away a 3-1 series lead and 14 point halftime lead. There was still a considerable amount of time left in the game compared to most of the other shots on this list, but this was a huge moment.

Degree of Difficulty (6.5): The finish through the contact from Bruce Bowen and Manu Ginobili is difficult enough. Dirk Nowitzki had to step to the free throw line and hit one from the charity stripe on top of that too. Sure, it’s a difficult two shots, but remember, this doesn’t factor in the moment. All we’re concerned about is how difficult Dirk’s contested lay-up and free throw afterwards were.

Crowd Reaction (5.5): This wasn’t a death blow for the Spurs or the San Antonio crowd. There were still 21.6 seconds left and Dirk had to make the free throw just to tie the game. There didn’t seem to be any sense of panic at the moment.

Announcer Call (6): What I just said about the crowd reaction is the same for the announcer reaction. Marv Albert gave us a quality “And the foul!” but it was just as much a late third quarter call as it was a Game 7 of the Playoffs call.

Intangibles (8): This was low-key one of the all-time great seven game series in Playoff history (only one game wasn’t decided by five or fewer points) and Game 7 was an absolute slugfest that featured one of the most epic individual battles in Playoff history (Dirk- 37 points, 15 rebounds, 11 for 20 shooting, 15 for 16 from the line … Tim Duncan- 41 points, 15 rebounds, 12 for 24 shooting, 17 for 23 from the line) and the biggest “And-One” basket I can remember. And how often do road teams win Game 7’s in the Playoffs? More importantly, can the Clippers become the next one to win on Sunday?

Check back Monday for Part II