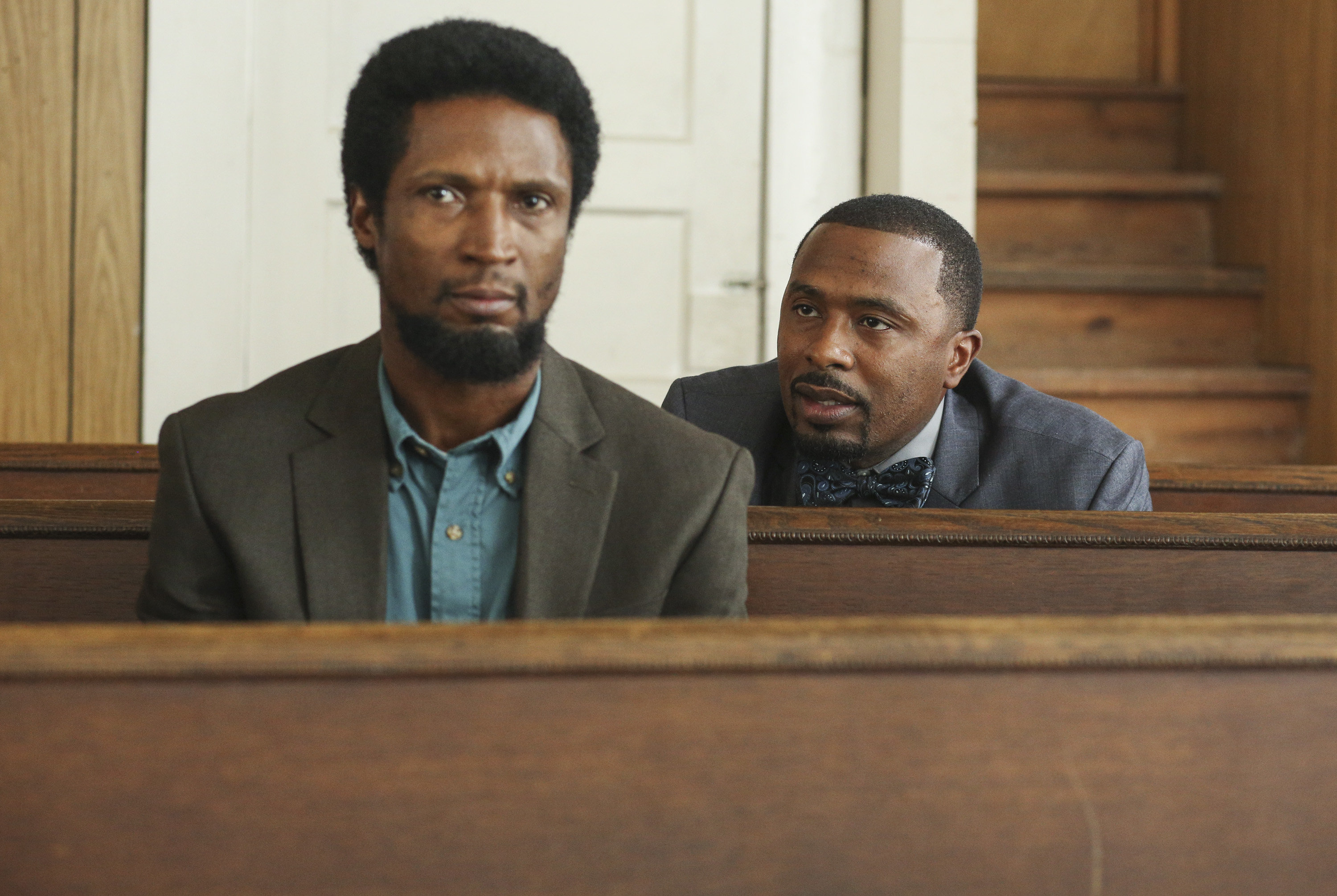 American Crime kicks off its finale with back-and-forth scenes on key characters in religious settings. The point here is to emphasize that forgiveness is relative. Various characters in American Crime have a dedicated viewpoint, yet it’s rare that any of them accurately comprehend the outlook of others. This filming style sets the tempo for the remainder of American Crime‘s season finale.

We then shift to Hector behind bars in Mexico. He seems unwilling to help build a defense against his charges. In spite of the requests of his lawyer, Hector appears to be a defeated man. On the opposite end of the spectrum is Russ, an individual capitalizing on his newfound desire to fight. He seeks Barb’s help in delivering charges to Carter. Aliyah disagrees, rather predictably, as American Crime displays when she preaches to a loyal following of Carter supporters. The camera shifts to a free Carter in the back of the organized group.

Borderline paralyzed by his freedom, Carter struggles to find words that summarize his emotions. The audience can see that his body language is genuine even if his words are somewhat nonsensical. Reality sets in when Carter is told that Aubry confessed to the murder. He’s confused by his girlfriend’s willingness to throw herself under the bus. After a brief moment in contemplation, he goes up to Aliyah and hugs her, an embrace that has the appearance of a goodbye. It isn’t surprising that anger over Aubry’s imprisonment trumps Carter’s happiness of being released.

Carter and Aubry meet during her incarceration. Their love has remained a pivotal point of American Crime‘s entire season. It hasn’t been an easy love, though, as both characters have been crippled by addiction. As Carter states in words eloquent by his standards, the pair only fit together in a fantasy world. They always dream of escaping their pasts, somehow being an ideal couple like the lovers they find in magazine pictures. This will never occur in reality, however, and Carter makes the decision to break off contact with Aubry. She refuses to believe him, but Carter’s intentions feel genuine.

Alonzo and Tony discuss a business opportunity. Hoping to relocate to San Jose, Alonzo has his sights set on a new community. He dislikes his current job situation, and the familial backlash he’s faced makes his current quarters unlivable. Meanwhile, the mental state of Russ rapidly decreases. He meets Barb in a frantic panic of words and energy. Unrealistic as ever, Russ actually believes he and Barb have a future. He’s crushed by the realization that nothing remains but sorrow. Some of his family is dead, other members are moving away, and nothing is in front of him other than torment.

In a scene that digs at the collective soul of the audience, Russ and Barb engage in a tearful hug. Russ tells her ex-husband to “let go,” and he does so in a couple of ways. After releasing Barb from his grip, the broken man exits the home without even the slightest dose of energy he had when entering. American Crime‘s knack for balancing out touching scenes should be praised. Throughout the length of this season, they’ve been separated enough to where viewers aren’t annoyed by heavy-handed sentimentality.

Hector stands in front of Judge Perez in Mexico. With his on-and-off girlfriend in attendance, Hector hears the case against him. This case is extremely weakened by the absence of a key witness on the prosecution side. As quickly as Hector entered the courtroom, the murder charges against him are dismissed, and he’s to be released from custody right away. It’s rewarding that at least one American Crime character experiences a positive turn of fate. Hector was shot, spent time behind bars, and had his face slashed during the show. He deserves this freedom.

Struggling to occupy his time as a free man, Carter roams the streets. After spending an empty moment at a bar, he takes a seat outside and phones Aubry. That promise to never call didn’t exactly last. Once Aubry responds on the line, the most shocking moment of American Crime transpires. Russ had already been walking toward Carter in the background, and he fires a single shot into the accused murderer’s head upon reaching him. Russ looks to have an out-of-body-experience, walking away from the murder scene with conviction despite clearly being overwhelmed by his actions.

A team of doctors do noble work attempting to save Carter’s life, but the gunshot wound proves too severe. Carter, a fixture of American Crime, is dead. Just like that. This news is most crippling for Aubry considering she took blame for Matt’s murder to ensure her boyfriend’s freedom. My eyes have fixated on countless shows over the years, and I didn’t anticipate Carter dying at the hands of Russ. Barb maybe, but not Russ.

Aubry has a dream-like vision of Carter clinging to life. The audience is wise enough to understand that such a moment is pure fantasy. In stark contrast, Aubry’s reality is shown to be a bloody mess. Unseen to viewers, Aubry had slit her wrists. A nurse screams for help as she states how Aubry lacks a pulse. Following Carter’s death, suicide is a predictable decision for Aubry. She lived for him during American Crime, plus she was facing life behind bars on top of living without the man she loves.

In a moment that tops the embrace of Russ and Barb, Aliyah and Aubry’s mom hug after the deaths of their loved ones. American Crime delivers a shocking amount of tragic pain in its finale. Once we learn of Carter and Aubry dying, we hear that Russ killed himself after murdering Carter. It’s disappointing that this moment wasn’t seen on camera. I don’t have a sinister interest in seeing Russ off himself, rather, I would’ve liked to have read his face as the cops closed in. Considering the role Russ played on this show, his final moments should’ve been displayed to the viewers.

Barb is forced to confirm the death of her ex-husband. Losing Russ is an unexpected tragedy that Barb likely never factored into the realm of possibility. The only sliver of happiness to emerge from this family of horrors is Mark and his wife agreeing that Barb should play a role in their lives. As the Skokie family come to grips with their trauma, Hector applies for a telemarketing job. Stating that all he has to show for his 26-year-old life is “a limp and a scar,” Hector overcomes the interviewer’s doubt about his criminal past. My favorite character lands the job. He’s the only person with a positive ending.

To those of you who have read my American Crime reviews, I sincerely thank you. Certain episodes were slow, others were riveting. Overall, this season was a quality run of episodes with superb acting. These positives outweighed the down moments. To anyone interested in following my work, switch over to my Wayward Pines reviews that will be dropping weekly.