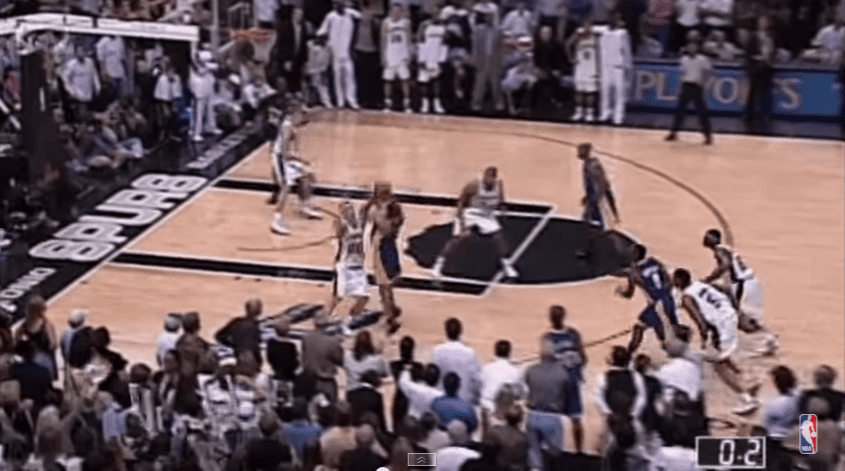 In case you missed Part 1 of The Greatest NBA Playoffs Shots of the 2000s , check it out here for the criteria, honorable mention, and shots 10-6. Onto the Top 5:

Stakes (9): Tremendous stakes here; the winning team would take a 3-2 lead in the NBA Finals and for Detroit, that meant avoiding a trip back to San Antonio with two must-win games separating them from back to back titles. San Antonio was going for their third title in six seasons. People forget that these were the two most consistent teams of the 2000s.

Degree of Difficulty (5.5): It’s just a wing three, but on the re-watch I found that Tayshaun Prince and his go-go gadget arms got a better contest on the shot than I remembered. Was Big Shot Bob more open than he should have been? Without question. Was it a totally wide open look? Not quite.

Crowd Reaction (6): In most situations like this, the home crowd will go quiet as soon as the shot goes down. In this instance, the crowd got quiet as soon as Horry got the ball; it was like they all realized “Oh shit, it’s Big Shot Bob” … so when he hit the dagger three, there wasn’t a huge difference.

Announcer Call (6): I would’ve liked it if Al Michaels delivered a bigger call given how big the moment was, but I do appreciate the subtlety of Michaels’ “This guy is off the charts” claim after Horry drilled the go-ahead three pointer. A golf clap for Al.

Intangibles (6.5): The bewildering decision of Rasheed Wallace to leave Robert Horry, only one of the clutchest dudes in league history, to double-team an already well defended Manu Ginobili in the corner has cast a shadow on the actual clutchness of the shot itself. Either way, this was the most dramatic moment in the best game of one of the least talked about NBA Finals of the 2000s.

Stakes (6.5): Remember that ballyhooed Lakers team that featured Shaquille O’Neal, Kobe Bryant, Karl Malone AND Gary Payton? Well, they were 0.4 seconds away from being one loss away from elimination in Round Two and the season being even more of a disaster than it turned out to be.

Degree of Difficulty (10): A homework assignment for you: Trying shooting a basketball in 0.4 seconds. Now try doing with some passing the ball to you. Now try it fading to your side as you shoot. Now try it with someone defending you. I hate to break it to you: you won’t make the shot.

Crowd Reaction (7): The crowd was still pretty riled up after a tough go-ahead shot from Tim Duncan seemingly gave the Spurs the win about a minute and a half earlier in real time. Just as quickly as Fisher got the shot up, it sucked the air right out of that building and left everyone just as confused as they were devastated.

Announcer Call (6.5): Another pretty underwhelming call from Al Michaels, though it is interesting in this case that you could actually hear that Michaels is legitimately shocked when Fisher’s shot goes down, just based on how he was approaching the call before the inbound pass. He was initially calling the play like Fisher couldn’t even get a shot off, let alone make it, and really, you can’t blame him.

Intangibles (7): The Lakers ended up losing in the Finals to the Detroit Pistons and the Kobe/Shaq tandem had their ugly divorce soon after. Still, everyone knows the Fisher 0.4 second shot, for it’s improbability (seriously, how does he get off AND make that shot) and for being, as far as I can remember, the first major play to feature a crucial look at the instant replay afterwards. Something else that should be noted: the Lakers running of the court routine was copied by my cousin Vin and I about a month later after Vin hit the game winning shot in a 2-on-5 basketball game at Summer Recreation. Being a 12 year old was so damn fun.

Stakes (7.5): The upstart Kings were up 2-1 in the series and needed just one defensive rebound to go up 3-1 on the two-time defending champs. And as you saw, they had not one, but two opportunities to secure that defensive rebound. For arguments sake, the Lakers did lose Game 5 at Sacramento, so in an alternate universe where Sacramento wins Game 4, they probably win Game 5 and go on to win the NBA Title just as easily as the Lakers did. So yeah, big time stakes here at Staples.

Degree of Difficulty (5.5): It was just a typical straight away three pointer for Horry, not all that different from the dagger he hit three years later at Detroit as a member of the Spurs, and just like Prince’s late close out in 2005, Webber got a decent contest on Horry’s top of the key three here. Just a little too late.

Crowd Reaction (8.5): An all-time great crowd reaction from the Lakers fans; probably the second loudest I remember that crowd aside from the Kobe to Shaq alley-oop that sealed the 2000 Western Conference Finals. They were so loud after Horry’s three though, that they actually drowned out Marv Albert after his initial call on the play. I can’t remember many times in sports where this happened.

Announcer Call (8.5): A rather simple call; “Horry, for the win … Yes!” but just listen to how Marv says Horry. I’m sure this sounds odd, but it’s like he knew this shot was going down and knew it was 1.5 seconds until the roof of the Staples Center was blown off. Perhaps that’s just a sign of an announcer knowing to up his game in a big moment. Or Marv is a clairvoyant.

Intangibles (7.5): Sadly, this was one of the last great NBA games ever to be broadcast on NBC. The next year ABC would acquire the rights to the NBA Finals and nothing good has come out of that arrangement (that’s not totally true; I’ll just always be heartbroken that I’m never going to hear Roundball Rock in a relevant way again). I can’t neglect to mention that this Kings/Lakers series is absolutely in the pantheon of Seven-Game NBA Playoff series, and Game 6 is the landmark example of potentially shady officiating that took place in the early 2000s. I’m not one who typically subscribes to conspiracy theories, but I’ve re-watched Game 6 and, um, let’s move on.

Stakes (7): Pretty high for as early as it was in the series. Cleveland was 39-2 at home in the regular season and had started out the Playoffs winning eight games in a row. The Cavaliers blew a fifteen point halftime lead in Game 1 (a result that led to my most animated reaction ever to a professional sports loss — RIP to my former television remote and former bedroom closet) and were on the verge of blowing a twelve point halftime lead in Game 2. Look, there wasn’t a bigger Cleveland Cavaliers fan at that time than yours truly, and let me tell you, the Cavs needed this win and so did I.

Degree of Difficulty (6.5): A contested fall away three pointer from the top of the key with exactly 1 second left on the inbound, and the contest Turkoglu got on LeBron’s shot was greater than any of the other game-winning three pointers that have been mentioned in this countdown.

Crowd Reaction (8): From the 2007-08 season through 2009-10, there wasn’t a better home crowd in the league than Cleveland. Their home record in that time period justifies that. In 2009 the Cleveland crowd was at the peak of their powers, and this was their best reaction to any moment in that first LeBron era.

Announcer Call (9.5): Maybe this is my late 00s Cleveland bias mixing around with my Marv Albert bias, but this might be the best play call of a game-winning shot ever. An absolute tour de force call by Albert for a moment that was among the top five in my life in 2009. Yes, that is sad, and you don’t even understand that half of it yet.

Intangibles (7.5): First, the obvious points: Turkoglu had nailed a go-ahead jumper just seconds before LeBron’s buzzer beater, a second straight game that Cleveland could have lost in the final seconds. After the shot goes in, all of LeBron’s teammates mob him except for Mo Williams, who doesn’t move after throwing in the inbound pass. Watch him; he’s just standing there in amazement. Speaking of standing there in amazement, did you catch Stan Van Gundy’s reaction after the shot? And I bet you thought Michael Jordan‘s reaction to his sixth 1st Half three-pointer in the 1992 Finals was the only time a shrug worked it’s way into an NBA moment.

Alright, so for a three or four years stretch, I was kinda sorta obsessed with the Cleveland Cavaliers. From 2007 through 2010, I missed maybe 15 games total, and they all probably came on nights when I had my own high school basketball. In that time frame, I missed exactly one Cavaliers postseason game. Go ahead, take a wild guess which one it was.

Game 2 of the 2009 Eastern Conference Finals coincided with Prom my Junior year of high school. It was a fun night that had it not been for a LeBron James buzzer beater would have been unequivocally ruined. I can neither confirm nor deny that I stopped dancing with my then girlfriend during the 4th quarter because I was getting score updates from my dad. I can confirm that after he told me Cleveland won at the buzzer I danced my ass off.

Stakes (10): It’s pretty cut and dry: if Ray Allen doesn’t make this shot the Miami Heat lose the NBA Finals. Can’t get any bigger than that.

Degree of Difficulty (8.5): The corner three is right in Allen’s wheelhouse, but it took a unique presence of mind to begin back pedaling immediately after Chris Bosh‘s rebound. It takes a Goddamn obsessive freak to know where he was on the court he needs to stop back pedaling.

Crowd Reaction (8): Should be closer to a 9 or 9.5, but I have to deduct points because a number of Heat fans had left.

Announcer Call (9): This was a long play that Breen had to call: he maneuvered his way through Chalmers bringing the ball upcourt, LeBron taking and missing a three and Chris Bosh grabbing an improbable offensive rebound before we even get to Allen’s shot … and he fricking killed it, capping everything off with one of his best Bangs! ever.

Intangibles (9): Just so many different subplots to this shot. As Breen mentioned mid-call, the Spurs could have fouled. Pop could have had Tim Duncan on the floor. LeBron could have made the first three, leaving San Antonio a bunch more time. The Spurs could have secured the defensive rebound and sealed the game. Ray Allen could have missed the shot. And, it usually goes without mentioning but it’s worth noting, San Antonio could have won Game 7 and this shot wouldn’t stand the test of time like a lot of others have. Instead, it’s the most iconic moment of one of the most exhilarating and stressful moments in my life as a sports fan; a shot that prevented me from weeping like a child because my favorite basketball player lost in the NBA Finals. Alright, alright, I was already starting to tear up before Allen’s shot went down.

The best part: every postseason, there is the chance that all of these moments can be topped. For fifty nights a year, every year, we’re just seconds away from a moment that will forever change the landscape of basketball and if you’re like me (a total lunatic), a moment that will make the night one that you’ll remember forever.