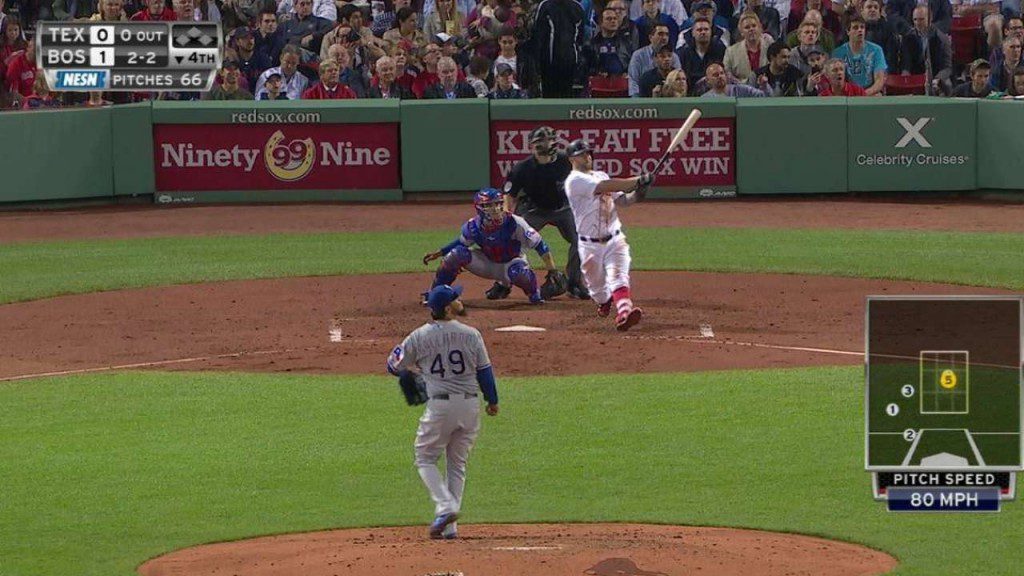 Someone should probably tell Texas Rangers skipper Jeff Banister that his lineup may need some tweaking.

Tuesday night, the visiting Rangers (16-23) were a little too late getting their bats to show up to Fenway Park and fell to the Boston Red Sox 4-3. It also didn’t help much that Yovani Gallardo struggled to find his footing on the bump early on when Dustin Pedroia doubled with only one out, and ended up scoring off of a David Ortiz single that slipped past diving first baseman Mitch Moreland. Gallardo did, however, manage to wiggle his way out of a sticky situation after striking out Mike Napoli with bases loaded.

Overall, Gallardo went five innings and allowed four runs off of 10 hits after a 32-pitch first inning, so it could have been worse. It also could have been better had someone put out an amber alert for the Rangers’ bats. Banister’s top of the order includes Shin-Soo Choo and Elvis Andrus, who combined went 0-for-8 during Tuesday’s loss. Texas was finally able to get on the board in the sixth when Thomas Field knocked in Kyle Blanks off of a single before Robinson Chirinos hit his first career RBI triple down the right field line.

Leonys Martin gave the Rangers a burst of teasing light in the ninth by leading off with a pinch-hit homerun off of Koji Uehara, bringing them within one, but failed to ignite any more fires beyond that, handing Boston’s Wade Miley his third win of the season.

A few scares plagued the game itself on a couple different oddities. After doubling out to right at the top of the fifth, Hanley Ramirez and his undusted Cheetos-like hairdo slid into second after Choo’s throw managed to beat the runner, yet he was still called safe due to the odd way he positioned his slide. Banister challenged the ruling, but the call stood after a lengthy review. Sox manager John Farrell and a team trainer went out to speak with Ramirez, most likely regarding the strange slide and if he was injured in any way in its aftermath, but the outfielder opted to remain in the game. However, third baseman Pablo Sandoval wasn’t so lucky after he was nailed by a Sam Freeman pitch in the left knee during the bottom of the seventh, and had to leave the game (thankfully, no structural damage was found, so San Francisco Giants’ fans felt that it was okay to chuckle at this).

RHP Phil Klein, who replaced LHP Ross Detwiler in the rotation, will make his first major league debut as a starter when he takes the mound for the Rangers on Wednesday evening.