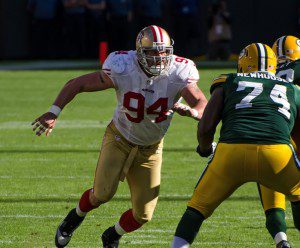 While the writing has been on the wall for some time, defensive standout Justin Smith has formally announced his retirement from the NFL after 14 amazing seasons.

Smith played with the Cincinnati Bengals until 2008, before coming to the Bay Area via free agency. Smith was a dominant physical force when in his prime, but the same push off the ball was not there this past season.

Smith was most recently a member of the San Francisco 49ers, who have seen players leave like fans trying to beat the traffic. Smith becomes one of a laundry list of players who has jumped ship from the 49ers this offseason. While the 49ers have taken steps to fill some of the holes left by departing talent it’s hard to imagine the team coming together fast enough to compete in a very tough division in 2015.