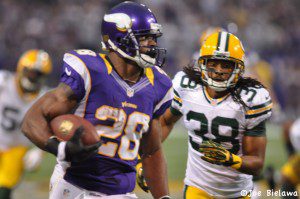 You know, the case that really wasn’t a case as charges filed against the all-pro running back were eventually dismissed in court (after the prosecution didn’t feel there was enough evidence to go after Peterson the first time).

Then the Minnesota Vikings let Peterson practice and play before sponsors got upset and the team eventually found the loophole of putting Peterson on a special Commissioner’s Exempt List. The Peterson went to trial (and copped a plea deal) and was suspended, only to have the suspension lifted and thus ensued all the drama with the Vikings about being traded and not wanting to play.

Well, apparently this isn’t over.

The NFL players union has asked a federal court to hold Roger Goodell in contempt for not complying with a federal judge’s order to send the Peterson disciplinary case back to an arbitrator. The filing was submitted against the commissioner on May 19th and alleges the league has “deliberately ignored both the court’s decision from 11 weeks ago and our repeated requests to comply with that order.”

Back in February the federal judge ruled that the NFL had to revisit a suspension that they levied against Peterson for physical punishment he levied against his 4-year-old son. Goodell has since lifted the suspension, but Peterson has not yet re-joined the Vikings and the arbitrator has not yet issued a ruling as the original discipline has been vacated. The suit alleges that the league has asked the arbitrator not to issue a ruling until the federal judge’s ruling has been heard by the Eighth Circuit Court of Appeals.

“The delay tactics, inconsistencies and arbitrary decision making of the league has continued to hurt the rights of players, the credibility of the league office and the integrity of the collective bargaining agreement,” In the absence of any action by the NFL’s governing board of owners, the players have acted to hold the NFL accountable to our players, the CBA and to the law.” Said Eric Winston, president of the NFLPA. The league has countered with their own points. “There is no basis for the union’s action,” “The district court’s decision on Adrian Peterson is on appeal to the Eighth Circuit. In the meantime, Mr. Peterson was reinstated more than a month ago and he may fully participate in team activities. The only remaining disciplinary issue concerns the amount of 2014 pay to be forfeited by Mr. Peterson and that issue is presently before the Court of Appeals rules.” Said Greg Aiello, NFL Spokesman.

This case also has huge impacts on other cases around the league. Recently signed Dallas Cowboy Greg Hardy is currently appealing a 10-game suspension linked to an incident of domestic abuse. The police have since dismissed the charges for that case due to a lack of evidence. The league has sourced “credible evidence” as the reason for the suspension.