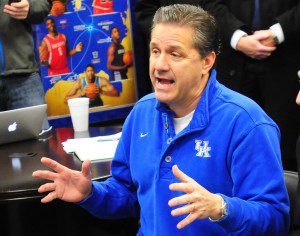 Cowherd had promoted John Calipari’s appearance by saying the Wildcats coach wanted to defend Wall, the Wizards all-star point guard who has had a fine career thus far, leading Washington from the trash heap to the playoffs and never flirting with trouble, despite once dancing for 30 seconds five years ago. But Cowherd instead asked Calipari questions about being famous in Lexington, and about recruiting, and about Karl-Anthony Towns. So finally Calipari forced the issue.

“You’ve got to stop on John Wall,” the coach said. “You’re out of your mind. He did something six years ago when he was 19 years old. He does a dance. What was the name of the dance? Stop. That was seven years ago. Here’s what I would say to you: he and Derrick Rose and a couple other guys are the best point guards in the league. They are.”