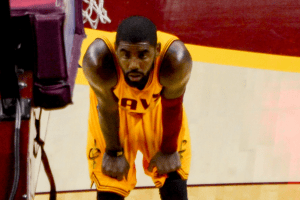 I’m not just concerned about Kyrie Irving‘s left knee for Game 2 and the rest of The Finals. I’m concerned about Irving’s health for next season. If (best-case scenario from Friday’s MRI) he merely reaggravated the tendinitis that has plagued him in the postseason Thursday night, it doesn’t obscure the fact that he’s only 23 and he already has tendinitis. Or that the condition was seemingly baffling the Cavs’ medical staff.

Perhaps my radar is up from watching Fox Sports’ “Uncompromising: Kyrie Irving” special earlier this week. On that show, Duke coach Mike Krzyzewski said the foot injury suffered by Irving during his lone season in college was career-threatening. That was his right foot, the same one that bothered him early in these playoffs. That makes finding an upgrade at backup point guard for next season all the more imperative. Akron Beacon Journal