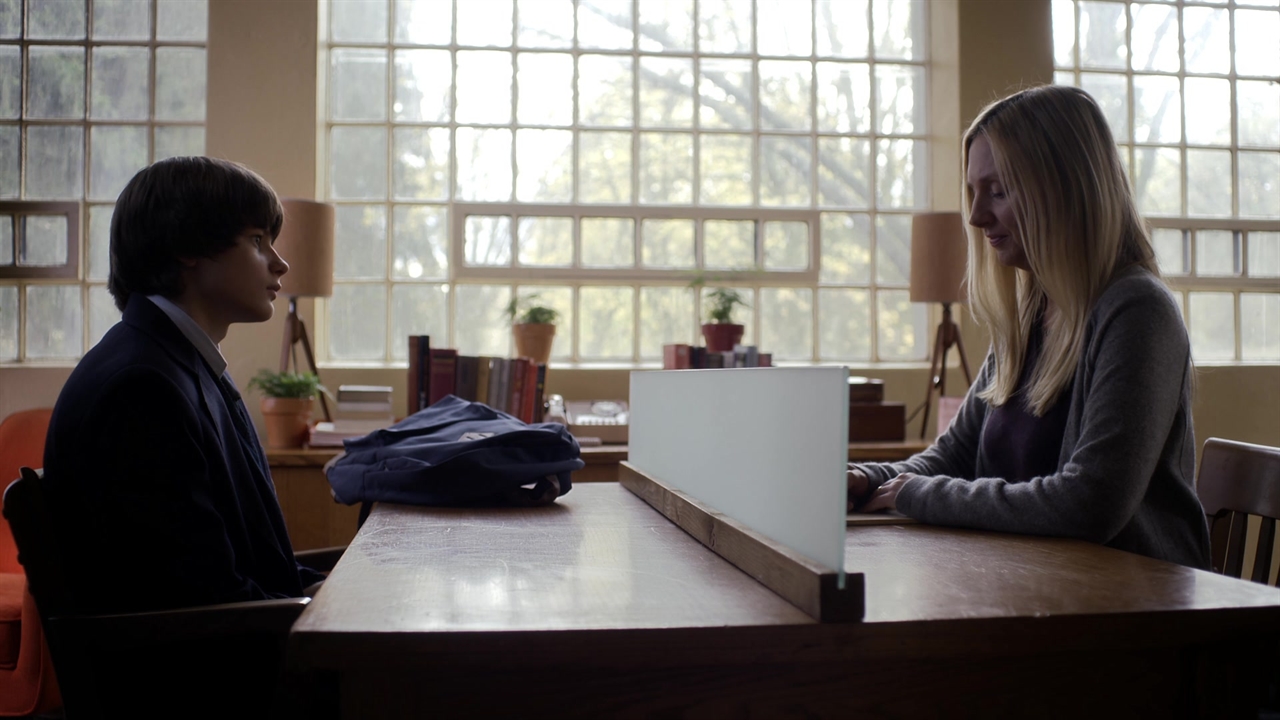 Wayward Pines starts its fourth episode with Burke barreling down the road. This follows last week’s violent climax when Burke and his family killed Sheriff Pope. The two males use a hose to wash their hands of blood as Theresa contemplates in relative horror. For everyone in the family, the startling reality of Wayward Pines has sunk in. Theresa brainstorms ideas of how to escape this current predicament. Burke, still without critical answers to the missing agents or the town’s strange mannerisms, decides that playing along and remaining aware is the best option. As Burke and Theresa devise a game plan in their car, Ben is given an invitation of sorts to attend a school in the community.

Burke amasses a personal artillery in preparation of the town’s backlash. Surprisingly to Burke, the local people have deemed him the new sheriff following his murder of Pope. Apparently to gain power, one has to physically destroy someone of power, at least such is the case in Wayward Pines. With a façade of sarcasm and wit, Burke cautiously accepts his new role. He even meets with the mayor of Wayward Pines. Meanwhile, in an effort to blend in, Ben attends his new school, “Wayward Pines Academy.” With the vibe of a trendy college campus, Ben is welcomed into a potentially key aspect of the show. What seems like an alluring environment is more than likely a subtly powerful way to control the collective youth mind.

As Ben embarks on a unique educational experience, his father searches for answers. They start to unravel when Burke acquires a stack of files. According to the paperwork, everyone in Wayward Pines is playing a role, merely embracing a persona. The implication is that everyone is an agent or employee for a town experiment that’s purposes remain unknown. This development is likely the most critical plot advancement M. Night Shyamalan’s show has offered. After Burke uncovers a degree of secrecy, Pam and other Wayward Pines residents bring him a dissenter. Oddly enough, if the townspeople are all just acting, a problematic citizen is nothing more than a designed circumstance, too.

Ben meets with a staff member, Mrs. Fisher, who asks him a series of eerie questions. She digs and pries into his brain with a philosophically shallow approach. Her biggest point of action is to raise doubt within Ben’s mind about his father. Mrs. Fisher joins the expansive list of annoying, creepy characters flooding Wayward Pines. Like Burke has countless times during these four episodes, Theresa roams the streets in search of information. This somewhat aimless wandering leads Theresa to Kate. As the former agent attempts to maintain her phony aura, she briefly calls an audible in order for Theresa and her to have a meaningful conversation. Little is accomplished, however, and Theresa leaves once a few words are exchanged.

In a “too good to be true” moment that should be raising doubt in Ben’s mind, he’s assisted home by a friendly female classmate. Really, Ben, you can’t see the trap being put before you? Rather than wait for his mom to take him home, Ben walks with the girl before Theresa eventually intervenes. The scene then shifts to Burke interrogating the aforementioned dissenter, Peter. Burke grills him for information on the makeup of Wayward Pines. According to Peter, the only way out of this community is a bullet to the brain. Burke sees value in this man’s knowledge, shown clearly when he admits an understanding of the past, but others in the town believe he’s due for a reckoning.

During a rainy night, Burke tells his wife that he’s been appointed sheriff. They’re both equally sickened by the prospect of executing Peter for the mere act of creating graffiti. Mrs. Fisher and Theresa meet to set up a double date. The teacher likely has motives of her own. For Burke and his family, they’re hoping to pull additional information from the mayor. For now, that meeting will have to wait. Burke still has more questions for the town’s black sheep. Peter recalls blacking out following a night out with a brunette woman at a bar. When the man woke up, stated comically, he describes the woman to Burke. “She was older, and her name wasn’t Denise.” Of course not, it’s Pam! Melissa Leo’s character is inserted into the strange story.

Continuing a narrative that grows old as the episode moves along, Ben meets with Mrs. Fisher again. This episode is a quality entry for the series, make no mistake, but Ben’s character can’t be described as anything other than dull. His scene is thankfully short-lived. Wayward Pines shifts to Burke and Theresa meeting with the Fisher couple at a local bar. Theresa wisely excuses herself alongside Mrs. Fisher, cleverly allowing Burke alone time with the mayor. Being a seasoned agent, one-on-one time is critical for a man of Burke’s skillset. The mayor warns Burke to “be careful” when talking about the academy Ben is attending.

A peculiar aspect of Wayward Pines is how the residents talk about Pope as if he left or retired. No one acknowledges the cold fact that he was gunned down after being obliterated by a car. Not much of a retirement plan. Inside the bar, Pam makes a speech on the rising career of Burke. From confused newcomer to sheriff, everyone is rather impressed by his ascension. Burke continues to play along as he vows to rid Wayward Pines of evil. Dr. Jenkins appears for the first time in the episode in the next scene. Ominous music plays shortly after the psychiatrist provides his trademark perplexing advice.

Burke opts to avoid the reckoning. His original plan had been to release Peter into the woods, a tactic that loses its likelihood of success once the prisoner commits suicide via electrocution. Burke once again loads up on weaponry with his immediate destination being unknown. He and Pam cross paths, and Pam voices how she’s unconvinced of Burke’s loyalty toward the town. The episode ends with Burke climbing the rocks with an apparent effort to escape Wayward Pines. Standing atop the town is a shirtless, bald shadowy figure who could be a man or creature. This week didn’t provide a breakthrough moment of clarity, but answers did come in part. That’s a welcomed development for a show with a mysterious backbone.