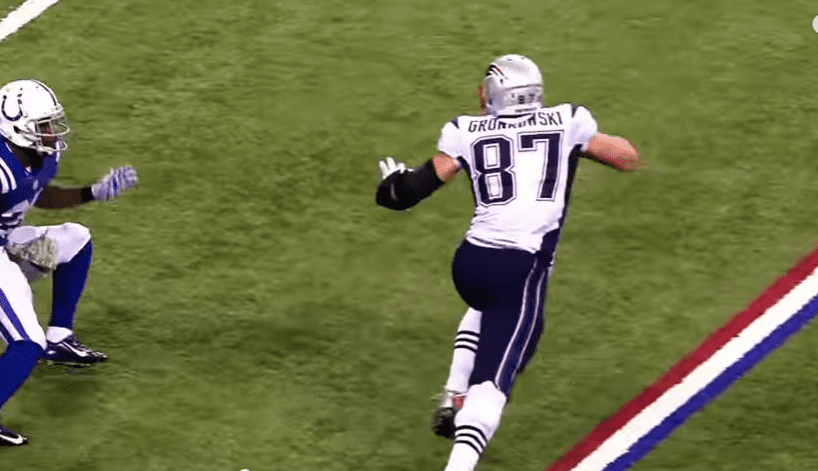 10. Travis Kelce
Before the 2014 season began, the Kansas City Chiefs let big pass catcher Anthony Fasano go to the Dolphins. No expert understood why until they saw the exquisite play of shifty rookie tight end Travis Kelce. He was the master of turning seven yard dump offs into long down the field plays. His quarterback is the king of dump offs, Alex Smith. Smith has no problem with checking down to his third or fourth option, and in Kelce’s case it has been leading to 15-30 yard plays. After a whole year in Andy Reid‘s system and Reid knowing what he has, it should make for an excellent pick in the later rounds and entertaining plays by the extremely athletic Kelce. Keep your eyes on the kid.

9. Julius Thomas
I don’t care what Peyton Manning looks like this season, he will continue to consistently get Julius Thomas open looks and put the ball into his hands. Manning knows what an absolute weapon Thomas is in the open field while facing man coverage. Manning will find Thomas every time a linebacker is covering him which keeps Thomas’ fantasy value extremely high at the position. He is further down in the rankings this year due to ankle issues last year, and more two tight end sets with Gary Kubiak now coaching in Denver. Even if Manning gets hurt, backup quarterbacks depend on their tight ends. Volume will never be an issue for Thomas.

8. Vernon Davis
Easily the fastest tight end is Vernon Davis. He is built like a tow truck and moves like a Ferrari. The talent from this guy is through the roof. The most frustrating part about owning Davis last season was the 49ers having no interest in throwing him the ball. That in turn hurt Colin Kaepernick‘s numbers and screwed up the season for the team. With new coaching and new wide out corps, Davis will assume the role of Kaepernick’s go to guy. Injuries also hurt Davis last year but a fresh start and new coaches will be great for his game.

7. Antonio Gates
Without question the oldest player in any of my rankings of non-quarterbacks is Antonio Gates. While I generally like to stay away from aging players for fantasy purposes, Gates refuses to become irrelevant. Last year was a career season for him catching 12 touchdown passes and avoiding injury for the most part. Gates and Philip Rivers will always find each other, especially in the red zone. The aging tight end is good for 10-15 touchdown trips this year as long as the old man can stay upright.

6. Jordan Cameron
Other than Jimmy Graham, Jordan Cameron was the biggest name tight end on the move this offseason. He signed a decent sized contract with the Miami Dolphins and this catapulted his fantasy value. When Cameron was in Cleveland, he was the number one pass catcher for the offense and had guys like Johnny Manziel and Brian Hoyer throwing him the ball. Now that he’s in Miami, Cameron has one of the most talented young quarterbacks in Ryan Tannehill and a plethora of pass catchers around him, not making him the focal point for every defense. He is out of the top five because of that same reason. Cameron’s fantasy value, like many other tight ends depends on volume. Cameron’s amount of touches will surely drop but a more talented QB throwing him the rock he could result in a career year.

5. Mychal Rivera
One of the most underrated quarterbacks heading into this season is second year man from the Oakland Raiders, Derek Carr. His ability to transition from college to pro last year made him the best QB in last year’s NFL draft. This season he only looks to improve and last year he showed us all that his favorite target is tight end Mychal Rivera. Rivera is like a Vernon Davis 2.0. Not as big with faster, better hands, and quicker open field moves. He had a three touchdown game against the division rival Denver Broncos last year. Rivera also had a stretch of six straight games with a touchdown. Out of every tight end on this list, he has the most potential to vault himself into the upper tier of the position this season. Quintessential highway robbery rounds 6-10.

4. Larry Donnell
The guy I am most excited to watch at the tight end position is Larry Donnell. After exploding for three touchdowns on primetime television last season, Donnell was no longer a secret. Of course after such a game a players fantasy value skyrockets and sometimes gets way out of hand. Fortunately for you, it’s very unlikely that anyone went total nuts and kept him so he should be available for middle rounds in your draft. Plus, Odell Beckham Jr. and Victor Cruz make for one helluva tandem that should open up the middle of the field for the monster target, Larry Donnell.

3. Greg Olsen
There are three tight ends in the last few years that have situated themselves as top tier players at the position. Greg Olsen and the two players ahead of him on this list are “the guys.” Three things separate them from the field: size, ability and targets. No tight ends in the NFL are targeted more by their quarterbacks than these three players. Any given week Olsen could top the two guys ahead of him on this list because Cam Newton adores him. If Gronk and Graham go early in your draft, be happy you didn’t have to reach for Olsen because he always lands right on his value come draft time. And he always makes owners happy by the end of the year.

2. Jimmy Graham
It is a myth that Jimmy Graham will take a fantasy hit now that he is a Seattle Seahawk. It is true that the Seahawks prefer a blocker at that position but after giving up a first round pick and their starting center, I guarantee they will get extensive usage out of him. Not only that but perhaps the most exciting plays to look forward for are the long touchdown catches Graham will be having this season. Russell Wilson is the best in the NFL at extending a play, and Graham will surely get lost deep down the field once Wilson starts moving around. Excellent potential on his new team and worth reaching for in your draft.

1. Rob Gronkowski
When Gronk is healthy, he is the best player in football. He can block, he can catch, he can run, and he can dance. But you only care about three of those reasons for fantasy. Do not be worried if Tom Brady does not start the season for the New England Patriots. When a second string quarterback plays, they tend to lean on the biggest target on the field, which in this case is Gronkowski. If anything, there will be an upswing in targets for Gronk during the games Brady is suspended. If the big tight end can string together another healthy season, he will finish this year high above the rest of the field.