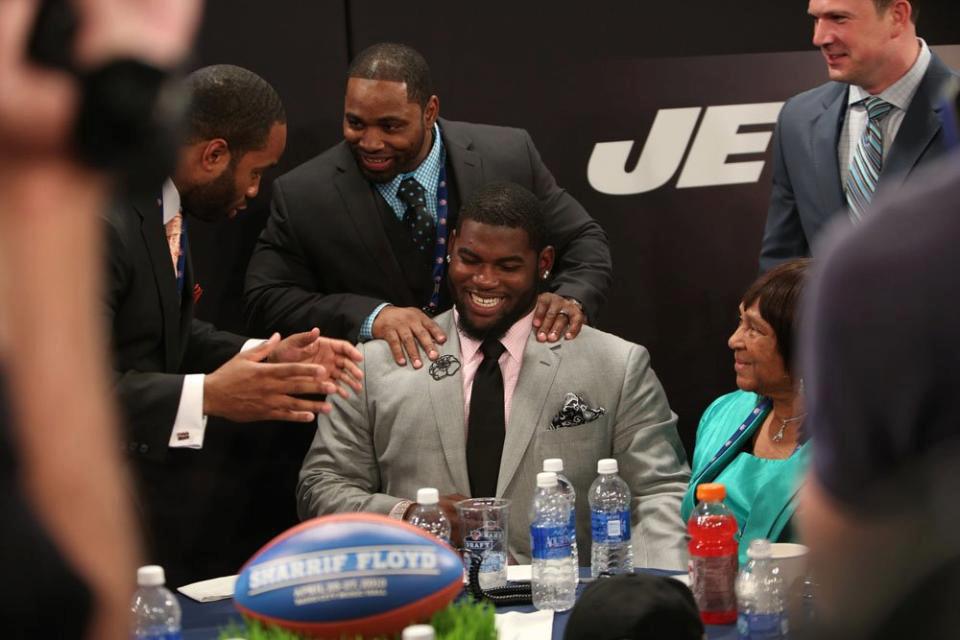 Sharrif Floyd is all smiles as his name is called during the 2013 NFL Draft.  Screen capture courtesy of the NFL/YouTube.

With the vernal equinox still fresh in our collective minds, corralling around to watch NFL football seems like a distant leisurely act. But for those that are actually playing the game, leisure is scarce. The cliche of there being no NFL offseason rings true, especially for Vikings defensive tackle Sharrif Floyd.

Floyd is a first-round draft pick in 2013 from Florida is entering his third season pro football. As tumultuous as the Vikings squad has recently been—marred by sub-.500 seasons in a competitive NFC North—Sharrif is optimistic that the 2015 season will bring more success for both him and the Minnesota Vikings as a whole.

Baller Mind Frame: How have you been spending your time during the offseason?

Sharrif Floyd: I’ve mostly been sticking around in Minnesota getting some workouts here and there. I’m getting ready to get out there (and play) in a couple of weeks. I sometimes head to Florida to go visit. Mostly friends. My grandma is from Miami though.

BMF: Growing up, who did you look up to when you were a kid that inspired you to become a football player?

Floyd: I watched the Eagles, Sixers—all the Philly teams. But football just fell into my lap. It started out with basketball but football grows on you. I wanna say in ninth grade of high school, I was on the football team and I tried out for the basketball team. I sat down with my head (football) coach Ron Cohen and he told me that if i wanted to go to college, I had to dedicate myself to one of them and not two, so I chose football because it’s what I was best at.

BMF: What do you expect out of this Vikings team in the upcoming season?

Floyd:I think we’re going to shock a lot of people this year, you know. We have all the right pieces. We’re going to make sure we come out strong and do what we gotta do to have momentum on our side.

BMF: How do you feel about your defense in particular?

Floyd: I always feel good about my defense man. Especially since we got a couple of new additions.

BMF: Do you have any individual goals?

Floyd: No individual goals, but I do want to top everything I did last year. I want to make this a statement year so this year I’m aiming high.

BMF: Since you grew up in Philly, you probably focused more on the NFC East. How does it feel to focus on another division in the NFC North?

Floyd: With divisional rivalries, it’s all love and respect. In general, I still love and respect all teams but as a player I’m gonna pounce on you. I’m not looking to play anyone in particular. My goal is just to dominate.

BMF: What’s your day-to-day in the offseason?

Floyd: I’m kind of winding down from the OTAs mostly. I’m just getting ready for training camps. A week later, we have the Hall of Fame game against the (Pittsburgh) Steelers.

BMF: When it comes to those preseason games, what’s the mindset like?

Floyd: It’s mostly just like practice. You have the same type of mindset. But with the stadium lights on,  Because of that, it still has that big game feel, but we still treat it like a high-end practice. Regardless, we’re all going in there looking for competition.

BMF: You’re currently playing at TCF Bank Stadium (the University of Minnesota’s home field). What do you think about the still in-construction US Bank Stadium?

Floyd: With the new stadium, I’m just looking forward to seeing all the fans happy with the new place and even more anxious than us just go get in there. Having said that, I’m still really excited to see the facilities myself.

BMF: Do you have a certain memorable play in your career that you look back on?

Floyd: My first sack. It was actually shared with Jared Allen against Ben Roethlisberger.

BMF: What do you think about Teddy Bridgewater as your quarterback?

Floyd: Teddy is poised to be great quarterback. First off, I played against him in college in the Sugar Bowl. Around that time, we had the No. 1 defense in the country and he kind of picked us apart. It was just impressive how he kept his focus as we played against him. I know he’s going to be a good quarterback in this league in due time.

BMF: With the holiday coming up, I have to ask: Is a hot dog a sandwich?

Floyd: Is a hot dog a sandwich? Never has been. Never will be.