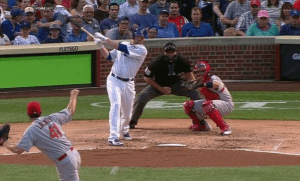 As of today, Jon Lester has been a Major League baseball player for 3,314 days. He’s done a lot of things during that time, most of them very good — like winning two World Series, or making three All-Star appearances, or being likened to Marilyn Monroe. But there is one thing that has eluded him, the white whale to his Captain Ahab: In 66 at-bats, Jon Lester had never recorded a hit.

But alas, the drama of “Waiting for Lester: The Existential Nothingness of Pitchers Hitting” arrived at its final act during Monday’s Cardinals-Cubs game. With two on in the second, the lefty came to the plate against John Lackey and struck a blow against the abyss. MLB.com