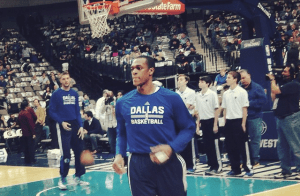 Rumors swirled that Rajon Rondo would sign with the Sacramento Kings before last season was completed so this is not a surprise. This is also not a long-term relationship. The Kings and Rondo agreed to a 1-year, $9.5 million deal which allows both sides to walk away if the relationship does not have satisfactory results. In a somewhat surprising move, the Kings also acquired Marco Belinelli (3 years, $19 million) per Rondo’s request according to Yahoo Sports.

All objective measures suggest the Kings will be better than last year although that’s not saying much. Rondo answered some quick questions from the media on recent adversity, the Dallas Mavericks, and next year’s expectations.

I would love to be surprised by the Kings making the playoffs during the 2015-16 season, but that seems highly unlikely in a competitive Western Conference as of July 14, 2015.