Technology has been under utilized in sports considering all of the devices and software at man’s disposal. Microsoft and the NFL are at the forefront of the movement to get us on the right track thanks to their exclusive partnership which has brought us the Xbox One’s NFL app and the Surface Pro 3 on the sidelines. The strides made since the deal was announced in May 2013 have been significant, but Microsoft is confident that 2015 will bring everything fans, coaches, and players need for their in-game experience, just in time for the NFL’s 50th Super Bowl anniversary. After experiencing a preview, I agree.

The ideal setup for fans watching from home involves one big-screen TV and a device capable of showing off the game in high definition with integrated fantasy updates from NFL.com, CBS, Yahoo! and ESPN. Good news, Xbox One owners – the NFL app allows fans to watch their games and receive fantasy updates without interruption. For example, let’s say someone watching a live game using the NFL app receives a fantasy notification. 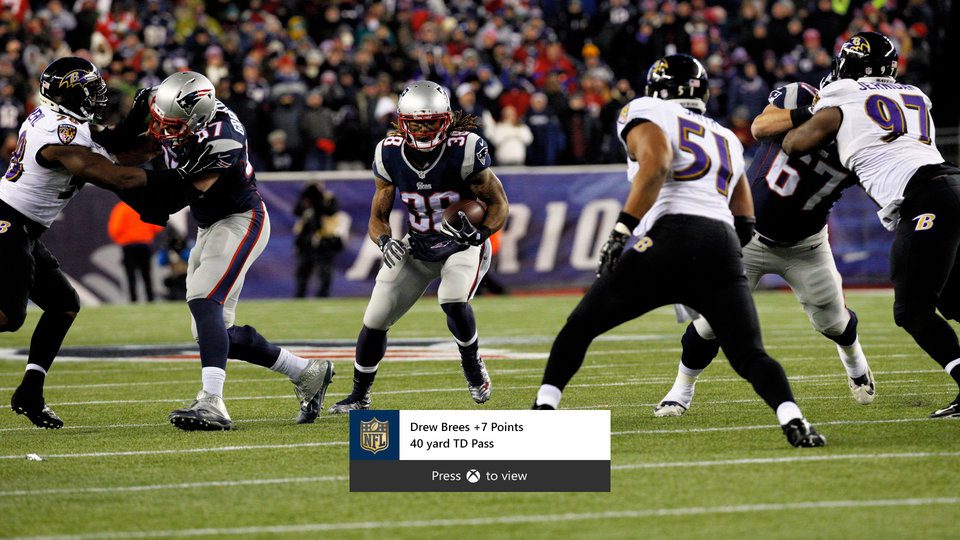 Pressing the guide button will take the game from fullscreen mode to a slightly smaller window, and snap the highlight associated with the fantasy notification to the right of the live game. Fans never have to leave the live action of an intense game to view the highlights determining their fantasy fates. Interface transitions occur smoothly and with the press of a button. The same is true for other fantasy tasks such as checking scores for the league, making roster changes, and switching between NFL.com, CBS, Yahoo! and ESPN leagues. The Xbox’s One’s NFL app is the ideal way for fantasy players to enjoy gameday, but there are plenty of new features and content catered to hardcore fans as well. 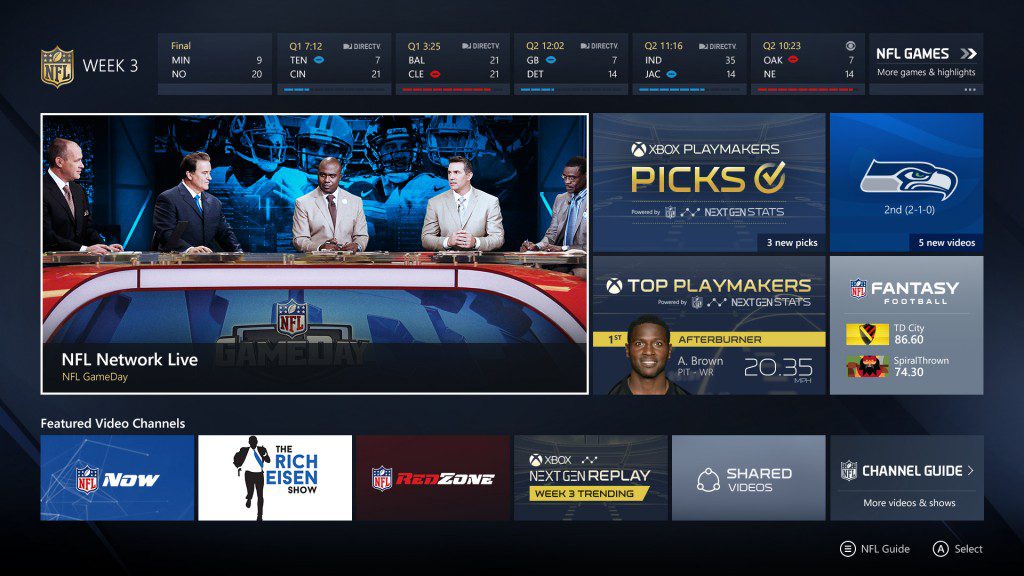 The NFL app’s look has been redesigned according to user feedback, and presents trending content for fans in ways that are easy to access. Of course the newest highlights are available, but the latest video content (like highlights, midweek updates, interviews) for every team can be found in short order, including an option to shorten the process by selecting a favorite team. The app also gives the ability to watch games from previous seasons, including every Super Bowl, for users in the United States and Mexico. Limited access to NFL Network programming will also be available.

Perhaps the coolest new feature of the NFL app is Next Gen Replay. Ever wanted to know how quickly skill players run for every moment of a play? The exact numbers would have been guesswork even a few years ago. Welcome to the future. Next Gen Replay runs through the action again in three different angles (sideline, quarterback, and overhead), and displays the speed (in miles per hour) of the chosen player. In this case, Antonio Brown speeds up to 20.35 MPH after he notices Big Ben targeting him in single coverage. The speed of the player is shown for the entire play so we get an indicator of when a player breaks, and an immediate opportunity to see where the coverage broke down instead of waiting for an NFL expert to explain what happened after viewing game film. Even something like understanding how much a nagging injury hampers a skill player’s mobility could be indicated with this new information. Executive producer Todd Stevens explained that other categories are being considered for tracking using NextGen replay, but no particulars are available at the moment. That said, the Xbox One will give fans access to stats that were considered unfathomable not long ago which makes it the definite platform for everyone’s NFL viewing needs. 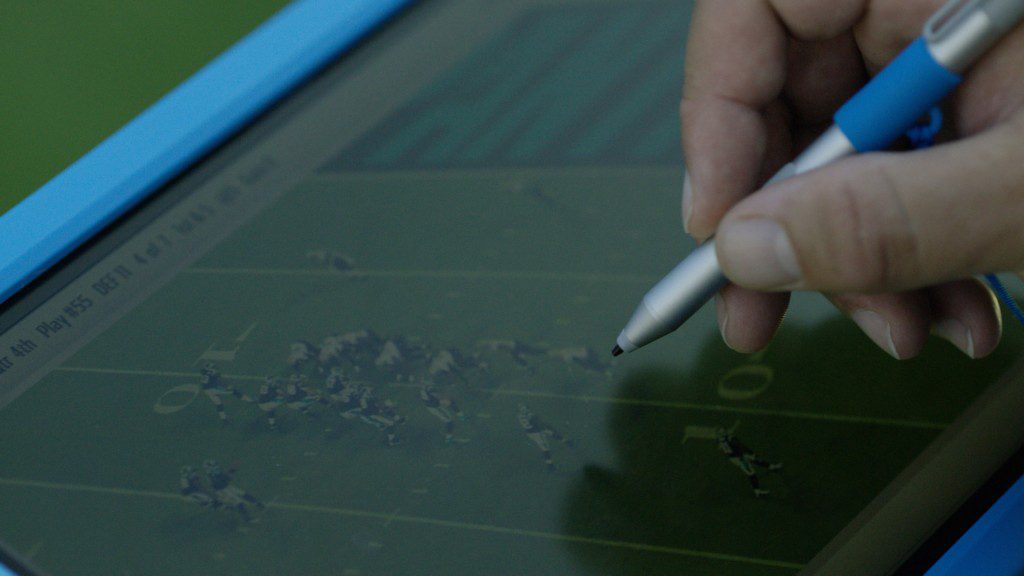 During the 2014 NFL season, teams were given the opportunity to utilize the Surface Pro 2 on the sidelines. Plays went from the sidelines to the booth up to seven times faster using Surface than the old print page method. The new Surface Pro 3 is expected to expedite this process even further in 2015, and has several new features to help coaches and players become more efficient on the sidelines. For starters, it can be annotated in inclement weather conditions, a strength no other tablet can boast. Plays are displayed in full-color and have the same zoom and focus abilities present in most mobile devices. Images can be organized in several categories which allow users to easily access their desired play. Images can also be edited with the tablet’s pen to point out what occurred on a given play. 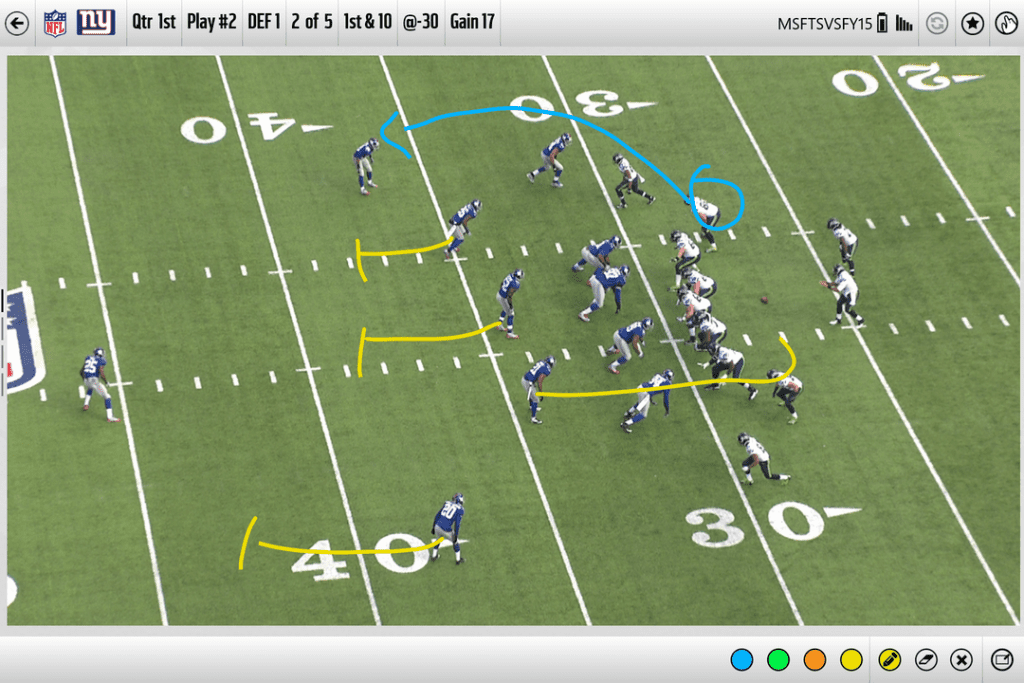 Or draw up something totally new on a digital whiteboard. 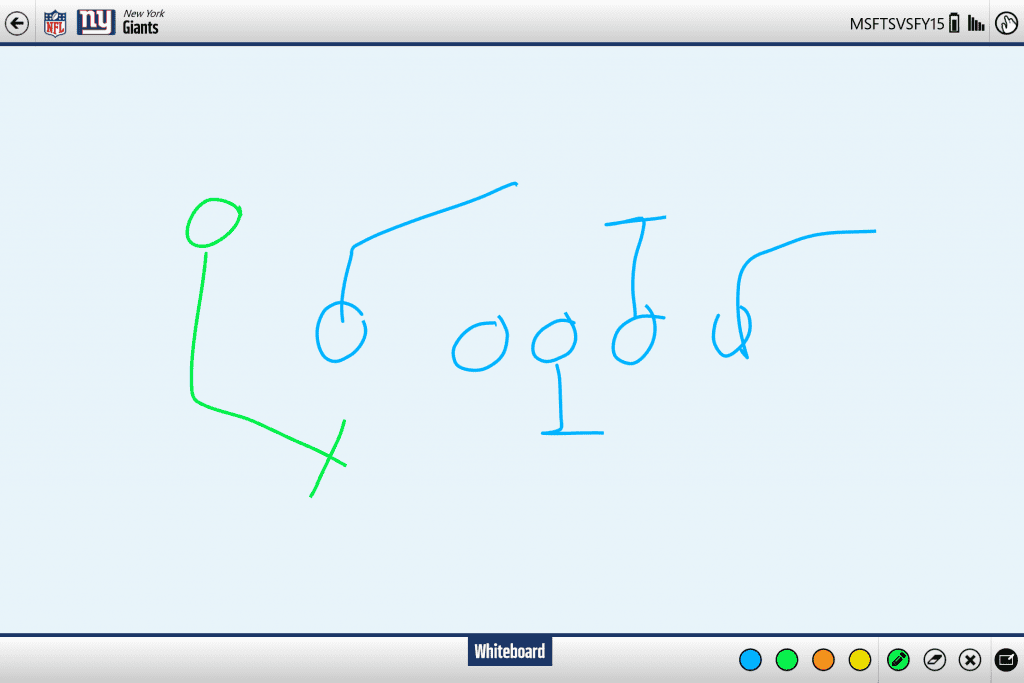 Director of Sports and Alliances Jeff Tran shared impressions from Super Bowl winning quarterbacks Drew Brees and Russell Wilson who both praised Microsoft’s tablet for helping their franchises and making them better players. The latest addition to the Surface Pro 3 should have them even more excited for the 2015 season: in-game video.

More than 20 preseason games will test video using the Surface Pro 3 with further expansion if all goes well. The most obvious use of this will be for coaches and players on the sideline, but this will be absolutely invaluable to referees asked to review plays during challenges once full implemented. Refs will be able to observe the exact moment to focus on without the assistance of the control room. The Surface Pro 3 will mitigate bad calls which serves everyone’s best interests.

Microsoft is the singular tech partner for the NFL and they clearly don’t take it for granted. They are creating the most immersive sports experience on the planet for fans, and improving the quality of the on-field product for players, coaches, and refs. Clearly, it’s a good time to an Xbox One owner.