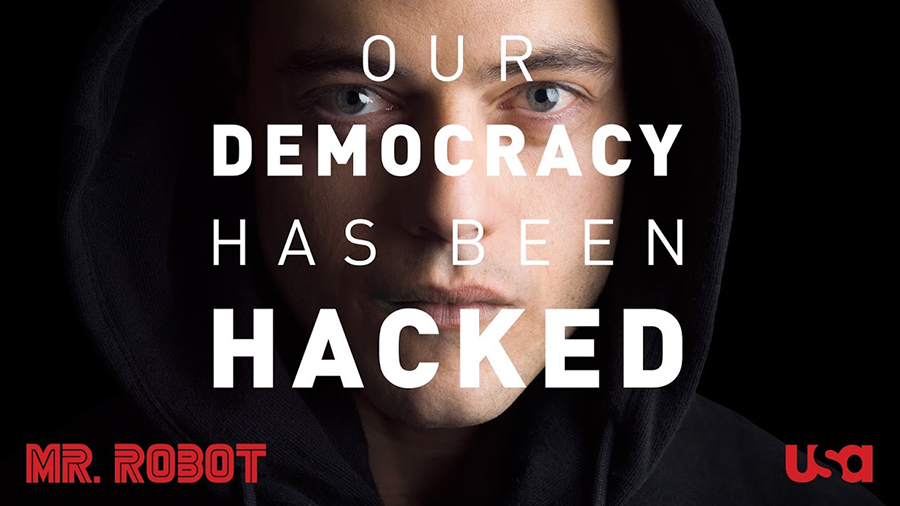 Mr. Robot is, without question, the most electrifying body of work on television right now. And this statement encompasses every single series that appears on a monitor. Boasting the characteristics of an HBO or Netflix Original masterpiece, Mr. Robot transcends that of mainstream programming ten-fold. This may be USA Network’s finest achievement and is most certainly a call to all entertainment slingers out there, nationwide, to massively step their game up.

When writing on the brilliance of this program, it’s difficult to even begin to arrange the order in which to celebrate the series. Every facet of this work of art is supremely crafted and perfectly executed. From the composition of the original music and score, credit to the superlative Mac Quayle, to the powerhouse acting performances of Rami Malek and literally every other member of the cast, this show is just crushing the airwaves.

Not to mention, what a piece of sci-fi gold; tech-inspired, epic, and fresh. If you’ve been thirsty for that full service, quality programming that only comes along once in a blue moon, you’re in luck: Mr. Robot, Wednesdays, USA Network, 10:00 PM.

As one might easily identify, this review is more propaganda than anything else. Spoiling pieces of information will be sparse, as I want everyone to experience Mr. Robot just as I did – in a curious state of unknown followed by an insatiable itch for more. Be prepared for full stimulation, top to bottom, from minor nuances like the placement, color, and text-style of the opening credits to the cinematic notables such as seamless panning and flawless transitions, all chill-evoking and brilliant.

From the opening scene, steady on, you’ll instantly gravitate towards the role of Elliot, the beautifully flawed, hyper-introvert that’s uniquely seductive in his reclusive and enigmatic state. His intimate knowledge of our present day, technological world gives him a very real quality of power, power that is quickly identified by grandiose entities, all of which have imposing and undefined intentions with it, and with him.

Elliot’s relationships are psychologically captivating. Every person he interacts with is being assessed, evaluated, and uncovered digitally, unbeknownst to them. In fact, he also has a relationship with you; a very exclusive one. The fourth wall is somewhat broken in that you get to receive his direct communication, thought vibrations and empathic feel on the world, but who you are to him is obscure, and entirely up to Elliot, all of which is subject to change at any given moment.

Sensory wise, the show hits every mark while also managing to triumph in other non-cinematic related ways, like featuring members of other ethnic backgrounds in starring and supporting roles; not just the usual cast of Eastern European faces. The women’s roles are written with dignity and power and the male roles are written with vulnerability; a refreshing digression away from the often-displayed gender dichotomy we’re used to seeing in Western Cinema’s trough of entertainment choices. The story’s soul feels genuine, and that’s greatly due to the visual representation of humanity throughout the running chronicle.

And while there’s no limit to the praise I can give regarding the acting miracles that occur in each and every episode, there’s a limit to the words in which I’m able to write here in this piece. One will have to trust that the decorated performances are all, at the very least, Emmy-worthy.

The kicker: the script is an original piece of work birthed by Sam Esmail, genius developer of what is surely the greatest digital representation of modern day hacker culture to date. The content was initially created with the intention of manifesting into a feature film, but Esmail was able to mold the work into a perfectly-constructed narrative, made to last not for just one single sitting, but for what’s surely going to be season after season. This particular piece of brilliance needed to have space and time to develop, time to breath. A few hours wouldn’t have been satisfying enough and couldn’t have done this epic series justice. We’re all very lucky for the way it panned out.

Mr. Robot feels like the product of Pulp Fiction making vicious love to The Matrix, but better: sexual, dark, poetic, and raw. An exquisite indulgence, a delicacy to be consumed with pleasure, and celebrated with each and every sense. For those that haven’t made the choice to sit down and be overtaken, do yourself a favor, and change that tonight. He’s waiting.