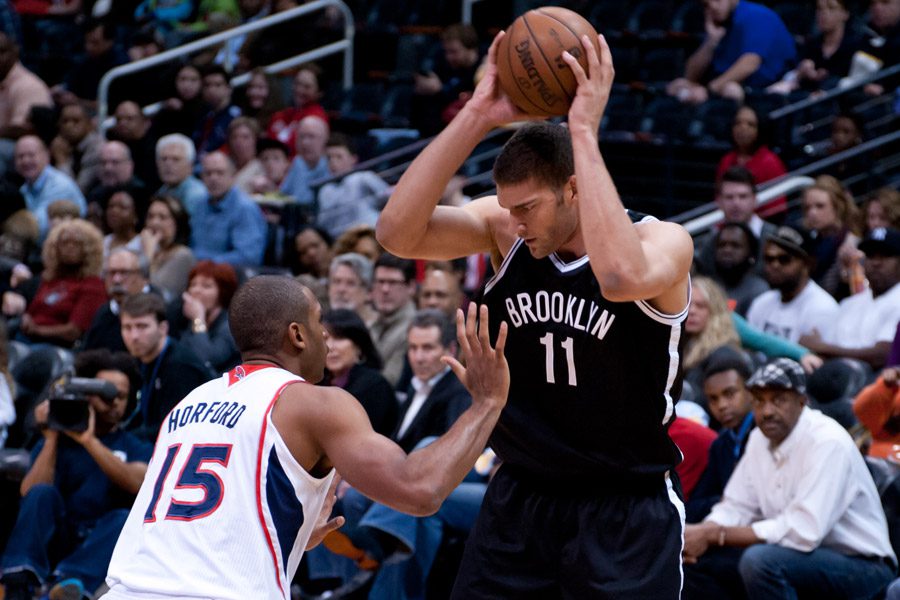 As a part of SB Nation’s NBA season preview series, here is our Brooklyn Nets preview! And here is NetsDaily‘s!

1. What significant moves were made during the offseason?
Obviously, cutting bait on Deron Williams was a huge move, playing as a gigantic admission of perhaps faulty transactions (revisionist history and all that, however), but also a much-needed impetus toward transition for tempered, dare I say the lowest of the low, expectations. After an “all-in” demeanor and “money is just paper, right” attitude, the Brooklyn Nets didn’t get what they paid for, failing to “buy a title.” Look, absolutely nothing wrong with spending the cash you have because, well, it’s your money. However, how many times have titles actually been bought? Sure, it happens (hello, Miami Heat; although Dwyane Wade will always be “el hombre” in South Beach), but to be a viable contender and commodity (which Brett Yomark actually executed brilliantly from the beginning with branding), you need to build from within (pounds chest, San Antonio Spurs), adding in “outsiders” to help get that chip (Golden State Warriors, waaaaaay up, they’re blessed!).

I wouldn’t place all the blame on D-Will for disappointing results on the court; after all, he wasn’t always on it! Injuries didn’t do Williams any favors (no pun intended), nor did his enigmatic personality. However, a new head coach every single season he was with the team and Brook Lopez being hurt himself for big chunks were detrimental in the Nets trying to help Mikhail Prokhorov stay a bachelor after his promise to get married if the team didn’t win a title within five years of his ownership tenure. Williams brought hope to the Nets when he first joined the team and was supposed to be the initial piece toward the completion of a great puzzle, except it all ended up puzzling. However, like a lot of great story arcs, this era of misfortune and missteps began with D-Will and ends with his leaving.

Of course, re-signing Brook Lopez and Thaddeus Young to become the Brooklyn Nets’ new core to build around was significant. If both left in free agency, particularly Lopez, the future would be very bleak. Very, very bleak. Fortunately, the duo who seemed to be able to work well on the court together and have some real chemistry last season decided to do it all again in Brooklyn.

Another significant move, maybe, is the NBA Draft night trade of Mason Plumlee for the draft rights of Rondae Hollis-Jefferson. The reason why it’s a maybe is because we don’t know what RHJ will end up being, although we do know that Plumlee has likely maxed out and is what he is – a very serviceable big man that will likely play for a dozen years at this level. However, Hollis-Jefferson has the potential to play above “serviceable” and be an Andre Iguodala type – tight defense on the perimeter, an athletic beast with court vision, but an as-of-yet inconsistent shot (but only because RHJ has had a small sample size of NBA work). Hollis-Jefferson is a very charismatic person and that should go a long way in New York, but if he can get down with the get down on the hardwood… star.

2. What are the team’s biggest strengths?
Brook Lopez. Can I end there? No? Okay, fine. Yes, obviously, Lopez is the team’s biggest strength and has the potential to be an NBA All-Star once again. As long as he stays healthy like he has recently, there’s no reason to think that he cannot be one of the game’s best centers once again, particularly down in the block. Bropez is reminding me of Patrick Ewing – great lost post game, but then developed a consistent and lethal perimeter shot as his career unfolded. Now all Lopez needs are gigantic kneepads and hyperhydrosis.

Another big strength is that Lionel Hollins is back as head coach. This isn’t a nod of approval toward Hollins’ ability as a coach (although I do like him and the way he coaches), but more of a “holy sh*t, the Nets have some modicum of consistency?!?!” Nuts.

There’s a lot of youth and with that a lot of potential… although production of said potential would be oh so much sweeter. But, since we’re in more of hopeful state with the Nets, a plethora of cavities aren’t going to show up just yet when we smile. Although, there are reasons to curl the corner of our lips upward, such as the aforementioned RHJ (20). There’s fellow rookie Chris McCullough (20), who favors comparisons to LaMarcus Aldridge, which wouldn’t be off too much at all considering McCullough’s ability to shoot from the outside at his height. Bojan Bogdanovic (26) finally had the opportunity to show out after a rough start last season, and should have even more opportunities to get buckets. Sergey Karasev (21) hasn’t gotten enough burn on the court to really make an impact, but we know that there could be some sweet dividends paid there. I’m interested to see what Shane Larkin (23) can do in a non-Triangle Offense and execute what made him a first round pick, the pick and roll. Markel Brown (23) has displayed glimpses of being more than a guy that can dunk and has played some really good defense at the NBA level. His performance at the 1 is still inconsistent, but in a league where playing small recently won an NBA title, it may not be so bad with him playing the 2 at times. Now if he could only be Steph Curry with the shot, boy.

3. What are the team’s biggest weaknesses?
Well, if we’re honest, it’s going to be what can also be a strength – youth. Along with the possible promise of being so young, comes the actuality of limited experience and sample size to glean what may come. Just like a flip of Two-Face’s coin, once it rests on the floor or his palm, the consequence of youth could be horrible.

Then there are further questions, such as, will Jarrett Jack be able to lead the offense through playmaking and actual facilitating instead of just taking shots? Can Andrea Bargnani reignite his career with the Nets after failing to do so with the cross river rival, New York Knicks? Where and when will Joe Johnson play, and would the Nets trade him at the NBA trade deadline or just go all-in (hopefully it works this time around should the scenario pop up), so they don’t give up a lottery pick to the Boston Celtics? Will NBA castoffs, Thomas Robinson and Wayne Ellington find a place with the Nets and excel?

4. What are the goals for this team?
Of course to have a special performance by DJ Khaled and friends at a June parade in Brooklyn. Other than that, the goal should be to not give the Celtics a lottery pick in the same aforementioned June. No, no, no. Can’t do it. Nope, can’t. Other than that, steady improvement, coming closer as a team, and building on consistency are the goals.