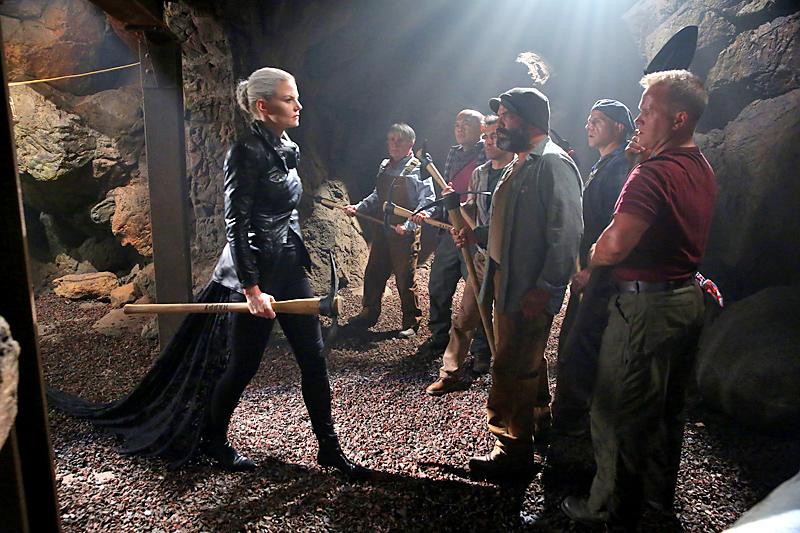 This week’s episode of Once Upon a Time was heavy on the mystery and light on the funny. My usual favorite thing about Once Upon a Time is how often they use comedy, despite the show’s primary status as a drama. While I understand the need to progress the plot, I found myself missing the various one-liners, mainly belonging to Regina, that sorely lacked in this episode.

That isn’t to say I didn’t laugh during this episode. The best Once Upon a Time scene was when Robin Hood looked at a picture of his unborn child’s sonogram on a smart phone. The moment probably wasn’t longer than two minutes, but it honestly made me laugh out loud.

It was so ridiculous, seeing Robin Hood, a character some of us still associate with a fox, handling something so quintessentially twenty-first century. Especially since he spent most of last season attempting to comprehend the technologies of this new world that he’s in. It’s a great example of what this show has always done so well: imagining how our beloved story book characters would behave if they were transported to our world.

But that’s not what we’re here to talk about. As usual the most important thing in Storybrook is finding out who the big bad is and how to defeat them. And this Once Upon a Time season it looks like we’re being treated to two big bads, but we’ll get to that later. Let’s talk about the one we already know about: Emma, aka the Dark Swan.

This episode we still find Hook struggling with his lingering feelings for Emma, which is completely understandable seeing as we spent four seasons watching Belle struggle with the same thing. However, unlike Belle, Hook wants nothing to do with Emma so long as she continues to be the Dark One – not counting last week’s attempt to use true love’s kiss to cure her, that is.

But of course, Emma, taking a page from Rumpelstiltskin’s book, decides to use his feelings for her to her advantage. She lures Hook to his ship under the pretense of having lunch “just like old times.” She and Hook fight, and eventually Emma vanishes, appearing to be hurt by Hook’s continued rejection.

Except that she’s not. Her real motivation for speaking to Hook was to steal his sword, the only thing in Once Upon a Time that touched Rumple when he was still a man, and the missing piece to the spell that can wake him. Luckily (or unluckily, it’s hard to remember who we’re supposed to be rooting for) Emma was able to get her hands on the sword and wake Rumpelstiltskin.

Now that Rumple is awake, alive, and a blank slate – his darkness having been transferred to Emma – Emma plans to turn him into the “purest hero that ever lived.” Earlier in the episode imaginary Rumple, who continues to personify Emma’s darkness, had told her to get the hero they both knew she needed to extract Excalibur.

I was a bit surprised to discover he was referring to non-imaginary Rumple and not Regina like I had assumed. But I almost like this better. Not only does it mean that Belle and Rumple have a second chance, but it also means that we’ll get to experience a Rumpelstiltskin that we’ve never seen before, one that never really existed because Belle was the only one who could see him. Can you tell I’m excited about their upcoming reunion? Because I am. That is, if Emma lets Rumple out of her little dungeon.

Alright, now, let’s talk about the new bad guy – King Arthur. Just when you think you’re starting to get some real answers on Once Upon a Time, they throw a curveball at you. After five seasons I probably should have seen this coming; it probably says something about my trusting nature that I was quick to assume Arthur was as pure as he presented himself to be.

It also probably didn’t help that according to legend Arthur was able to pull Excalibur from the stone because he was pure of heart and the rightful King. But as is common with Once Upon a Time, the stories are only the initial basis of these characters and the writers are always more than happy to shake things up to fit their needs.

While Once Upon a Time stuck with the King Arthur-Queen Guinevere-Sir Lancelot love triangle, they decided to change the dynamic a bit. Rather than have Guinevere sentenced to death, Arthur implies that she chose to return to him while Lancelot fled. However, as we find out both in present-day Storybrook and flashback Camelot, Arthur is not as good a guy as he appears to be, which makes me question how much staying together was Guinevere’s choice.

It’ll be interesting to learn what King Arthur has in store besides attempting to steal Storybrook to turn into his new kingdom, of course. He might not get far. David may be fooled, but he still has to get past Mary Margret and Regina, who all Once Upon a Time fans know are the real bad asses. I hope we also get some more information behind what happened between Guinevere and Lancelot, as well as what exactly Arthur did to lose the trust in his best friend and knight.

Though this episode wasn’t my favorite in the series by a long shot, it progressed the plot in numerable ways that have me itching for more answers. I can’t wait for next week’s Once Upon a Time episode; hopefully we get more of Regina’s trademark snark too.