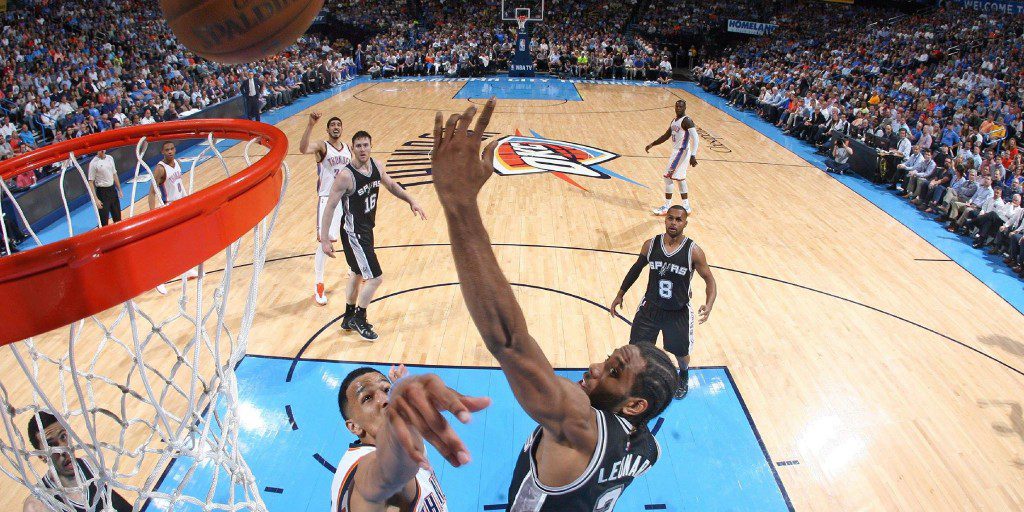 A string of three consecutive San Antonio Spurs players on the Top 50 Players Countdown concludes with small forward Kawhi Leonard. At just 23 years old, Leonard has already built himself quite a resume. He’s one of the youngest players ever to win the NBA Finals MVP, he’s the reigning Defensive Player of the Year and he’s been anointed as “the man” in San Antonio by just about every relevant individual within the Spurs organization, from Gregg Popovich to Tony Parker.

No matter how you feel about LaMarcus Aldridge‘s standing in San Antonio or how much Tim Duncan might have left in his tank, the Spurs will go as Kawhi Leonard goes this year and for many years moving forward. In such a short period of time we’ve seen Leonard transform from a high upside slab of clay to a nice looking vase with cool designs on it and shit. People makes vases from clay, right?

Anyway, Kawhi entered the league with a boat load of potential, but he wasn’t elite, or even very good, at anything quite yet. But as the Spurs always do, they built molded this lump of clay into a terrifying basketball-playing cyborg. The development of his mid-post game last year would have been the highlight of most 23 year olds seasons. And to a degree, it was. That was the next logical step in the offensive progression of Kawhi Leonard. If he could create a shot for himself, in the post or off the dribble, the two avenues which most of Kawhi’s offense came from, the Spurs had a safety valve when possessions broke down. Those Tim Duncan left block post up’s aren’t going to be a bail out option in San Antonio forever (as far as we know), and now Kawhi provides that form of last resort offense.

The most noteworthy part of Kawhi Leonard’s game was the ever-growing dominance that he displays playing defense … you know, the unglamorous end of basketball that a lot of people don’t care to pay as much attention to. There are a lot of good defenders in the league. There are a handful of great defenders. Then there’s Kawhi Leonard, a total fucking menace on the perimeter and one of the only guys in the entire league, frontcourt and backcourt players included, who can dominate a game on the defensive end of the floor.

If you aren’t familiar with the Kawhi Leonard defense experience, just check this video out to see what I’m talking about.

It’s methodical, it’s brutal and at times it’s completely unfair. This guy just destroys opposing offensive possessions to a degree that I haven’t seen before, and he does it with taking unnecessary risks. He’s a locked in off the ball and he’s locking dudes down on the ball. If you have the ball and are being defended by Kawhi Leonard and think for a split second about dribbling the basketball, he will have already stole the ball from you.

It’s difficult to imagine that Kawhi could improve any more on the defensive end, but then again he is only 23 years old and by all accounts this is one of the most driven guys in the entire NBA. The scariest thing for opponents is that Kawhi could still make big time strides as an offensive weapon, and he’ll probably do that sooner rather than later. Even though Kawhi was much more assertive within the offense, his shooting numbers went down from the previous season almost entirely across the board. He’s established himself as a good mid-range scorer and there were glimpses of complete dominance in the post, but he’s still got a good deal of work to do before he’s mastered either area.

There won’t be an immediate need for Kawhi to carry the Spurs offense this year or any year too soon. The Spurs will continue to play an unselfish team oriented machine basketball so long as Gregg Popovich is the head coach. Kawhi will get his opportunity to shine within the offense, but where he will shine brightest is on the defensive end, and off the floor, where he has proven to be the embodiment of the perfect Spur, putting in an insane amount of work in the offseason and saying all of the right things when he actually chooses to open his mouth:

“I’m not one of the guys in the league for the fame. I’m here so I can take care of my family, my mom, my friends and take care of myself. I love the game of basketball and as long as I can do that, keep playing and try to get some more championships with the organization, I’ll be happy. I don’t care about winning an MVP – the MVP doesn’t mean you’re the best player in the league.”