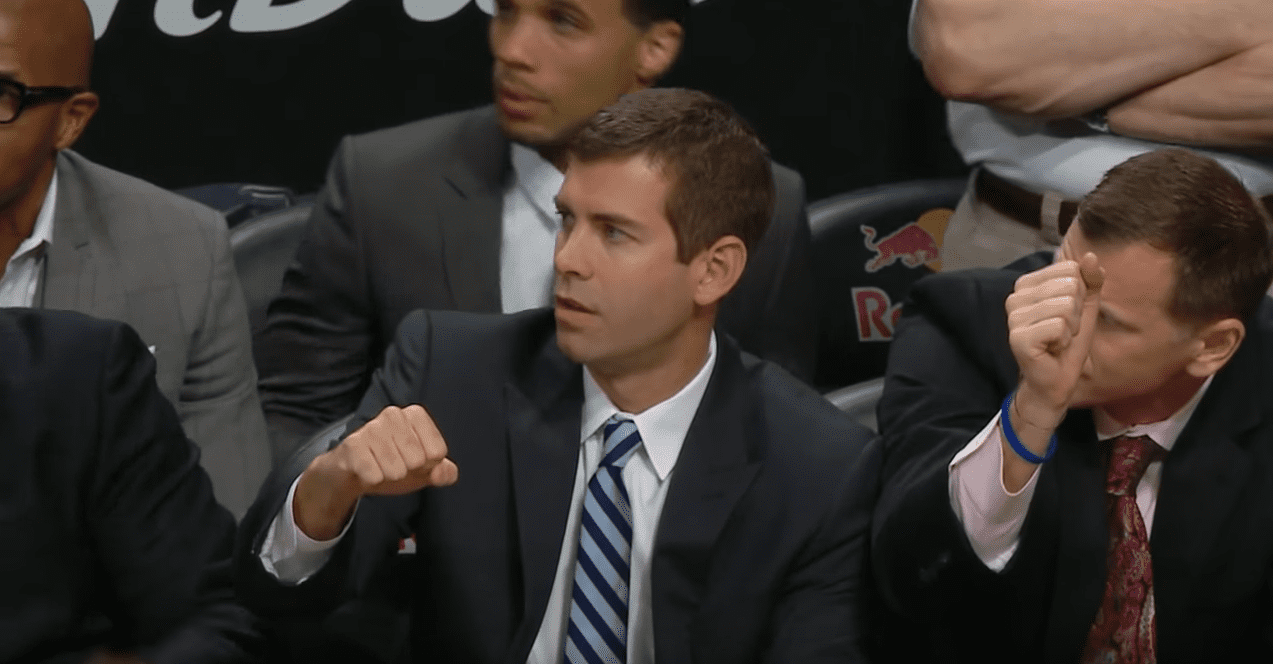 1. What key moves were made in the offseason?

They kept Brad Steven, right? They did? Okay, excellent. Is he not the best young coach in the league? He led a group of youngsters so-called “bench players” to the seventh seed in the Eastern Conference last season. While that’s nothing to write home about, it was indubitably an over achievement for such a young team. Sometimes such a situation can be counter-productive for a young team, but with a coach like Stevens. Making sure that guy is around for the long term is KEY to the Celtics’ success. Of course certain players of Stevens choosing are necessary in order for him to implement his coaching philosophy. Therefore he went to work with his savvy boss, Danny Ainge.

First order of business was forward Brandon Bass. As beloved as he was in Boston, he is an undersized power forward on the wrong side of his career for the direction this youthful team is heading. With Bass signing with the Los Angeles Lakers there was a clear need for an athletic veteran big man to help bring along Kelly Olynyk and Jared Sullinger. Enter David Lee.

Looking at Lee you would never guess he is a ten-year vet with a championship just recently added to his resume. But that’s exactly what he is. The two-time All-Star was averaging just under a double-double with 14.7 points and 9.5 rebounds a game, until a leg injury sidelined him allowing Draymond Green to play his way into the starting rotation of the Golden State Warriors. We all know how that ended. With Lee heading to Boston he is almost guaranteed a massive amount of playing time, giving him a chance to be one of the leading scoring and rebounding big men of the Eastern Conference.

As good as Lee is in the low block, his physicality is not what he is known for, and that is something Boston has been lacking since the departure of Kevin Garnett. So Ainge and Stevens made sure that would end this season with the acquisition of the gritty shot blocking, Amir Johnson. A fan favorite over the past half decade in Toronto, Johnson’s physical style of defense and shot-stuffing explosiveness will translate brilliantly in Boston. With low scoring numbers the 28-year-old isn’t known for his offense, but is certainly a rim protector. An undersized 6’9″ may not sound intriguing, but what he lacks in height he makes up for in length and jumping ability. A perfect complimentary piece to what Stevens seems to be building in the low block for the Celtics.

In perhaps one of the most underrated and under-the-radar moves this last offseason, Danny Ainge essentially stole forward Perry Jones from Oklahoma City, expending only a 2018 second-round pick to the Thunder, while also receiving a 2019 second-round pick as well as cash. Jones has dealt with knee injuries since his college days, but at 23 there is definitely time to get healthy. He never got to showcase his uncanny athletic ability in Oklahoma, not due to his skills, but because of a guy named Kevin Durant. Ever heard of him? I figured. Anyway, the depth at the position in Boston will assure Jones time to rest his knees when needed, but also the minutes required to show the NBA just how good he can be. A classic case of a great move for all teams involved as well as the player.

As for the Celtics draft, it was a bit of a disappointment in some fans eyes. With Ainge having a suitcase full of draft picks most people assumed this was the draft that Boston would move up and take one of the coveted big men sitting atop the draft board. It didn’t happen and the Celtics would sit in their 16 spot picking Terry Rozier, the speedster out of Louisville. A great player no doubt, but a bit of a head scratching pick due to how many guards were already on Boston’s roster.

They followed Rozier up with yet another guard in R.J. Hunter out of Georgia State University. Any questions fans and media had about that pick were all laid to rest when Hunter finished as the leading scorer of the entire NBA Summer League in Las Vegas. The late first-rounder may even find himself starting come the beginning of the season.

With their final pick of the draft they snatched up 6’8″ forward out of Louisiana State, Jordan Mickey. He led the nation in shots blocked per game last season. Surprising considering his height, not so surprising when you find out he has a 7’3″ wingspan. He has drawn some comparisons to Amir Johnson. Wow, good planning, Danny.

Finally, the Celts gave a long-term deal to fan favorite and sixth-man machine, Jae Crowder. The 26-year-old even showed a national audience his abilities in the first round of the playoffs against the Cleveland Cavaliers, giving LeBron James fits as he defended him extremely well. He might not start, but he is invaluable off the bench for this young team. They also signed Jonas Jerebko to a multi-year deal. The 6’1o” sharp shooter gives them amazing depth and versatility at three different positions, something which Brad Stevens is high on.

2. What are this teams biggest strengths?

Did I mention Brad Stevens is their head coach? I did? Good. He is good. Really good. So good in fact that with a superstar-less, youth filled team he took them to the playoffs. While the seven and eight seeds mean your team is out of the draft lottery and has a low percentage of beating one and two seeds, for this team a playoff appearance was a glorious confidence and experience building tool. Stevens knew his team would never get past the Cavs, but he used the four-game sweep of his team as a learning experience. Coaching is a massive strength of this team.

It’s a good thing the Celtics have a quality coach because this is an extremely young team. The average age of the roster is 24. So many inexperienced players need a leader of men and they have that in Stevens. That youth becomes another strength of theirs with Stevens at the helm. If Stevens can keep his team on a stable emotional level and get all the young guys to buy into his philosophy, the sky would be the limit for this team. The young age will show up later in the year as they begin to run circles around better, older teams.

The speed and athleticism of this team will carry it a long way. The guard play of Rozier and the biggest small guy on the court at 5’9, Isaiah Thomas will determine how far this team can go. That paired with the development of Kelly Olynyk and Jared Sullinger. Although Sullinger was originally thought to be the better of the two, the progression of Olynyk makes us think otherwise. The seven footer has been getting better and looks quicker as of late. Recently for team Canada, in Olympic qualifiers, Olynyk posted major numbers in a game against Venezuela with 34 points accompanied by 13 boards. Most intriguing was nine of those 34 came from outside the arch. Hopefully, for Boston a sign of things to come for the young forward and the team.

Let us not forget the importance of the President of Basketball Operations for the Celtics, Danny Ainge. By bringing the original “Big Three” together and bringing the city of Boston an NBA championship after quite a long drought, he has cemented himself as a legend in Boston. The rest of the league began to pay attention during the dismantling of that team. After all the smoke cleared, Ainge ended up with 25 first and second-round picks until the 2019 draft. If 25 picks in the next three years isn’t a strenth, I don’t know what is.

3. What are weaknesses of this team?

As wonderful and as exciting to watch as the young age of the Boston Celtics will be this year, youth remains to be a weakness in this league. Just last year this team led the NBA in turnovers and this upcoming season they are even younger than last. With all the challenges youth can pose on the court, the biggest threat a young team presents could be more complicated off the court.

It is a life changer for some of these guys. All this money being thrown at them, while for the first time maybe in their life they are completely unsupervised with a fistful of cash. That can sometimes lead to disasters. With so many players on this team for the first time coming into money there is a feeling of uncertainty to how they will react to it. It’s certainly a story within this season to pay attention too.

I’ve already mentioned the plethora of picks this team has due to the superb wheeling-and-dealing of Danny Ainge. In theory, Ainge has put his team in a favorable position, but looks can be deceiving. At first glance it looked as though Ainge was unwilling to deal his draft picks in order move up in past drafts. Eventually anonymous owners would make statements to prove otherwise. Ainge has won himself so many trades throughout the years that some owners are now completely unwilling to deal with Ainge because they are scared whatever he is offering will end up favorable for his team in the grand scheme of things.

Well when you talking about a team with the youth and promise such as the Celtics have, goals can tricky. The goals set for this year will be small as a team but large for each individual on the team. Can the city of Boston really expect more than what they saw last year from this team? Certainly not but they do play in Boston, where a goal for any team, in any sport in that market, is to keep the fans involved. That shouldn’t be a problem considering the athletic ability on the roster and the fact that head coach Brad Stevens will never let a team of his play without passion.

As for the basketball goals of this team, it is quite simple. Find a superstar. It’s that easy. No matter how it is done, this team must find a leader. Whether Ainge makes a trade with his stockpile of draft picks or they find a diamond in the rough with the insane youth on the roster, it has to happen, this season.

Isaiah Thomas made a case for new face of the team, but he needs to play a whole season before he can be declared Celtics go-to-guy. Maybe even Kelly Olynyk can build off the big summer he had for his international team? What about Jared Sullinger? Think he can finally make an appearance? Maybe one of the rookies? Will the real Boston Celtics star please stand up?

A lot of questions on that last paragraph which is fitting for the amount questions this team has for itself.

5. If master Jedi, Yoda, had a chance to give this young team advice, what might he say?

Remember, a Jedi’s strength flows from the Force. But beware. Anger, fear, aggression. The dark side are they. Once you start down the dark path, forever will it dominate your destiny. Luke… Luke… do not… do not underestimate the powers of the Emperor or suffer your father’s fate you will. Luke, when gone am I… the last of the Jedi will you be. Luke, the Force runs strong in your family. Pass on what you have learned, Luke. There is… another… Sky… walker.

Ok…thank you, Yoda…ummm…. Did anyone tell him this was a basketball team?