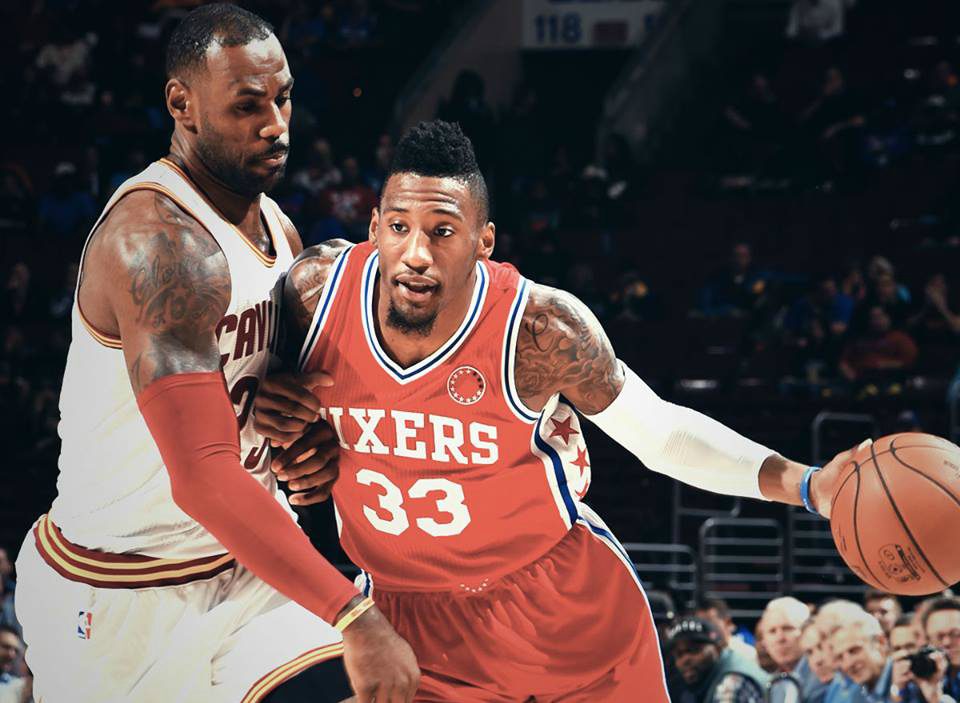 On a fourth quarter alley-oop dunk in the Cleveland Cavaliers’ 107-100 win over the Philadelphia 76ers, LeBron James became the youngest player in NBA history to reach the 25,000 point plateau. As usual, James’ milestone is the headliner on ESPN and every other sports channel across America. Tweets about James’ career accomplishment are flooding the internet and videos of the historic dunk have already generated millions of views on Vine. What’s lost in all of James’ fanfare are stories about the game itself and how for the first time all season, the Sixers looked like a legitimate, functional and talented basketball team.

That’s right! The 76ers balled out against the Cleveland Cavaliers. Well, for the first 15 minutes at least….

Three days after being boo’d off the court in their home opener, the Sixers exploded for 32 first-quarter points led by backup point guard, T.J. McConnell, whose gritty play and slick passing helped spark the, at times, deficient 76ers offense. With McConnell running the show, the Sixers, who missed six of their first seven field-goal attempts, converted on 11 of their final 13 shots, ending the first quarter on an impressive 21-3 run. Unfortunately, things went downhill after that. Trailing by as much as 15, LeBron James (22 points, 11 assists, 9 rebounds) and Mo Williams (21 points) led Cleveland on a furious rally, outscoring Philadelphia by nine in the second quarter and by 15 in the third. It was lights out after that.

Despite losing, the 76ers had a lot to be proud of Monday night. For the first time in three games, the Sixers offense was efficient, converting on a season high 38 field-goal attempts (they had 19 against the Utah Jazz on Friday) dishing out 22 assists and committing only 13 turnovers. Their frontcourt tandem of Jahlil Okafor and Nerlens Noel were aggressive from the tip, combining for 38 points on 53 percent shooting. Okafor, who before the game, said that “there’s a long way to go” in his progression, dominated Cleveland bigs, proving to be too strong for Kevin Love (15 points, 8 rebounds) and too versatile for Timofey Mozgov (6 points, 7 rebounds) and Tristan Thompson (8 points, 9 rebounds).

Bench play was also huge for the Philly. The Sixers second unit, which has been outscored 102-45 in their first two games of the season, contributed 36 points on a commendable 13/24 from the field. T.J. McConnell was a big reason why, handing out 12 assists (6 points, 7 rebounds) for a Sixers team that is desperate for a consistent playmaker. McConnell, who looked more like a D-League point guard to begin the season, showed an impressive ability to penetrate the defense, resulting in three Nerlens Noel dunks and an assortment of uncontested shots from Nik Stauskas (15 points, 3 three-pointers) and Hollis Thompson (12 points, 6 rebounds, 4 assists) who was brilliant off the bench.

On a side note, Robert Covington struggled in his season debut (4 points, 1/9 FG, 0/5 3PT) and for the first time, point guard, Isaiah Cannan, had more assists (1) than turnovers (0). In 100 minutes of play, Cannan has registered only 5 assists (7 turnovers) in three games. Also, Meek Mill was in attendance for the game. During an interview, Meek told sideline reporter, Molly French, “I’m riding with the Sixers to the fullest. I’m rocking out til’ the end, no matter how the season goes.”

Take notes Drake. That’s the definition of a REAL fan.