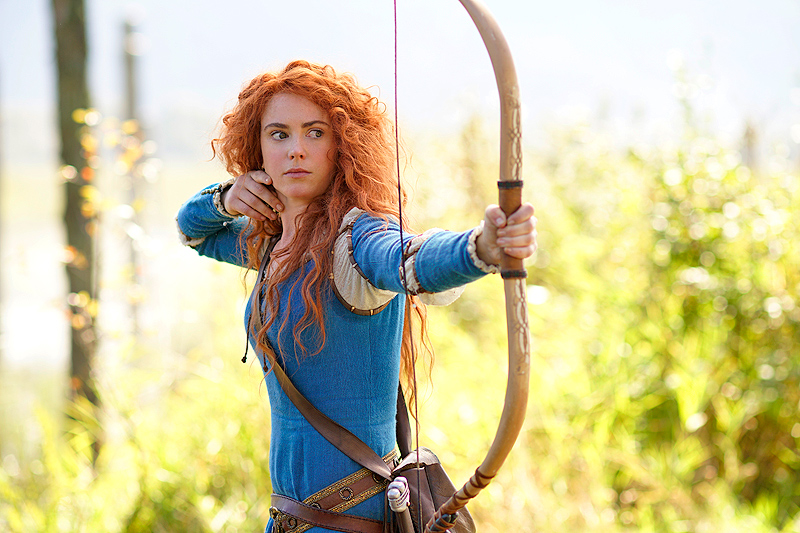 Once Upon a Time‘s latest episode did what it does best: introduce perfectly cast characters that will likely never be seen again, and mirror two nearly identical storylines in the past and present.

Back in Camelot, Merida knocks Belle out and kidnaps her to use her knowledge of magic to help rescue her brothers that she’s now been trying to save for six episodes. When Belle wakes up and finds out what’s happened she’s all, “oh well I guess it’s ok that you knocked me out if it’s for a good cause.” Belle always was one for a sob story.

When the new Once Upon a Time besties finally get to DunBroch (Merida’s kingdom, for those of you who only watched Brave once) Merida tries to convince Belle to make the same bear potion from Brave so that she can take on her former suitors and save her brothers. Speaking of her suitors, they look identical to their cartoon versions, something that Once Upon a Time always takes seriously.

Belle, however, doesn’t think that Merida needs Once Upon a Time magic to change her fate, and instead tries to get her to take her fate into her own hands. Belle, luckily, is smarter than Merida, because Merida clearly didn’t learn her lesson that time she accidentally turned her mom into a bear. Belle trades the real potion for a placebo and forces Merida to fight her own battles, which she subsequently wins in the second quickest conflict resolution this episode.

Meanwhile in present day Storybrook, Rumpelstiltskin goes through a similar dilemma, as he continues to believe he’ll never be anything but a coward. After shattering his and Belle’s symbol of their love and using the shards to cut himself free he flees the forest where Merida has been keeping him and goes right to the first place anyone would think to look for him – Belle.

When Merida is sent after them with Once Upon a Time instructions to kill Belle, Rumple’s first instinct is to flee. Belle, who yet again proves that she’s braver than him and smarter than everyone else, tries to get Rumple to see the bravery he has hidden way deep inside. It doesn’t work at first, like with Merida back in DunBroch, but eventually Rumple goes back for her and manages to save both Belle’s and his own life from a very large Scottish bear.

This is where things get iffy in Once Upon a Time. Rumple goes to Emma and makes a deal: Merida’s heart back where it belongs for his attempt at pulling Excalibur from the stone. Luckily, Rumple is able to pull the sword from the stone, despite only really having done one, maybe two, heroic things.

Like Belle, I always thought that Rumple had goodness inside him, but that he just didn’t want to see it. Even so, the Once Upon a Time writers should have given Rumple at least one more episode full of heroic acts to pass as the only person who could pull Excalibur from the stone. In a past episode it was said that the only the purest of heart could pull it from the stone, but maybe Excalibur isn’t as picky as we thought?

Not that it matters anyway, since Emma has both halves of Excalibur, something that was reiterated this Once Upon a Time episode is something that SHE SHOULD NOT DO. Now the only person that can save everything is Nimue, as per Merlin’s voicemail.

This is bad news because, according to legend, Nimue was Merlin’s lover, and a lot of people have been speculating that Merlin’s lost love we learned about in last week’s Once Upon a Time flashback also happened to be the Dark One that put Merlin in the tree. If that’s the case then it looks like Storybrook is screwed. But then again, when is it not?