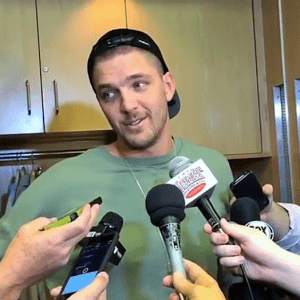 Dallas Mavericks small forward Chandler Parsons finished getting dressed in front of his locker following the Mavericks’ 108-94 loss to the Charlotte Hornets, his back noticeably tense under the avoirdupois of a stinging defeat. He topped off his Thursday night attire with a very Tony-Romo/Frat-Boy chic black backwards cap before turning his attention to the waiting camera lights of the media that stood behind him.

Film and television always present an over-dramatic portrayal of post games pressers, most claiming that the questions “flew”. Nothing was flying here. Reporters and journalists asked their inquires in low, sotto voices as Parsons casually made eye contact and answered frankly, his usual charismatic persona still on display despite the loss. So, when asked about the failed experiment that put him in play during crunch minutes of the second half instead of his usual first half (the small forward is under a tight minutes restriction due to right knee surgery), Chandler Parsons gave the most Chandler Parsons answer imaginable:

“It’s almost like the basketball gods saying, ‘Here you go for that dumbass idea’.”

It’s pretty clear that the failed Parsons project would not be in repeat mode. The idea originated after the Mavericks’ cringe worthy home opener loss on Tuesday by Parsons himself after he claimed that he felt helpless watching his team struggle during the second half from the bench.

During the execution of the idea, which seemed decent in theory, Parsons scored two points on 1-of-5 shooting in 14 minutes.

Dallas head coach Rick Carlisle was quick to not place the blame on any one specific area or play. “You can’t blame the loss on that,” he expressed during his presser. “That’s just not what it’s about. We’ve got to play better. We’ve played poorly for two consecutive games and that’s not good.”

Dallas looked like it had something cooking during the first half, where they trailed 54-53 going into the locker room (despite shooting 50 percent) as Dwight Powell led the way with 10 points while Al Jefferson put up 13 for the Hornets during that time.

The Mavs rhythm was thrown off base in the third quarter though, and they never regained their composure.

Wesley Matthews, who ended the night with 11 points, didn’t feel their rhythm was thrown off by sliding Parsons back into the lineup during the third quarter. “I don’t necessarily think it was just because (we slid) CP back in the lineup cause we did that the other night, just in the opposite order,” Matthews said to Mavericks insider Earl K. Sneed as he sat in front of his locker. “It’s going to be different in any way until our restrictions are lifted. Right now we’ve gotta find games to win: we’ve gotta be tougher, we’ve gotta be smarter, we’ve got to want it more, we’ve gotta be more aggressive, and we’ve gotta play together more so than ever.”

The Mavs look to take on the New Orleans Pelicans at home on Saturday.