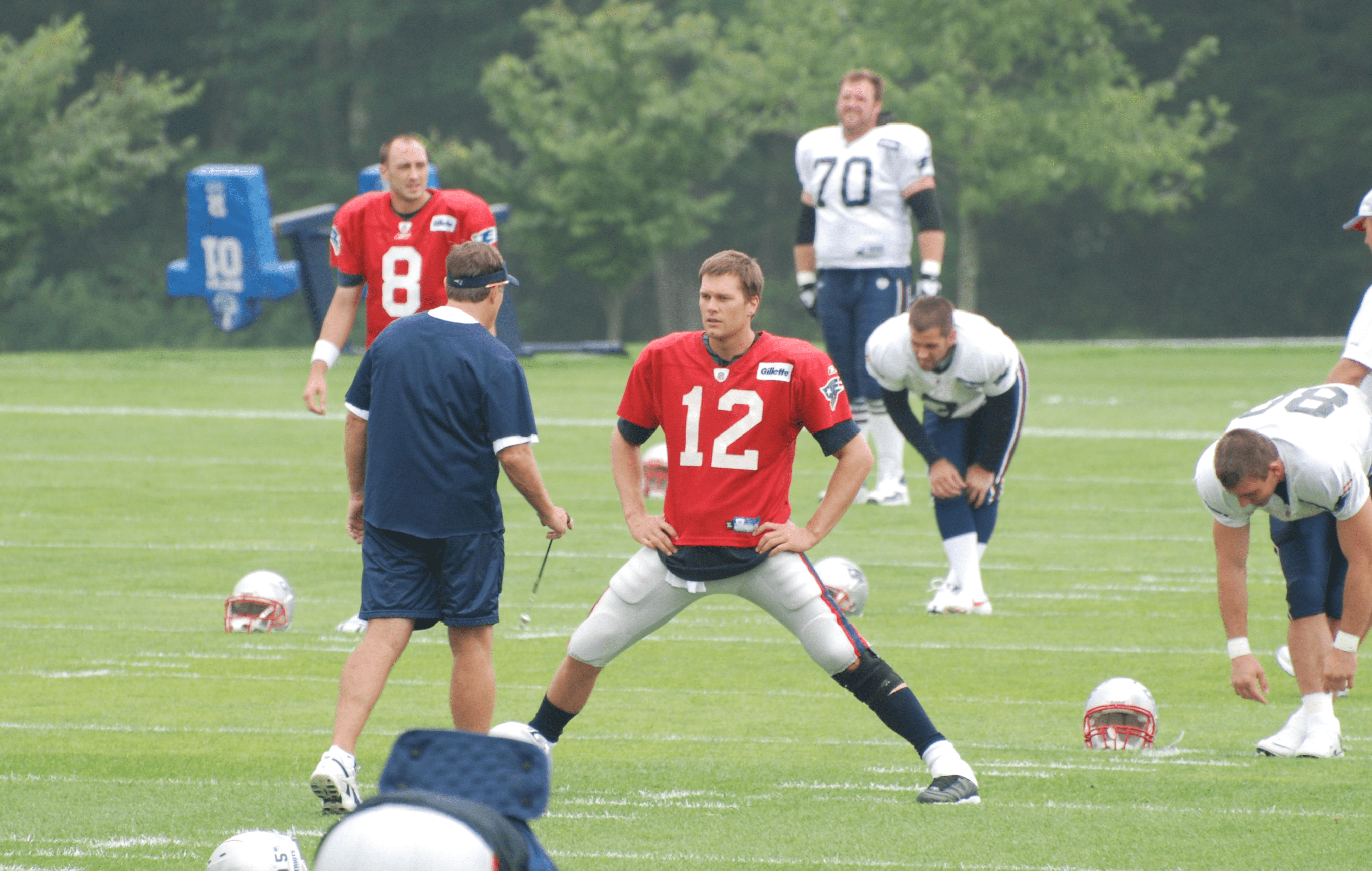 All this winning week in and week out is really starting to wear on me as a fan.

After the first few weeks it was no big deal, but now I have a problem with the level of competition the Patriots are facing. Each week I observe the New England Patriots play an opponent and smash them in every aspect of a football game. Each week I’m watching a game that takes three hours from my life that I cannot get back and I refuse to blame MY team.

Is there no team out there that will pose a threat to the Pats? How can I possibly gauge the skill of my team when every week they play a team and a coach so far below them the game is over in the first quarter? How are they supposed to be prepared for the playoffs if they have only played one playoff-bound team (Indianapolis Colts by default) in eight games? I blame the scheduling of the NFL for being poor. when a mediocre team like Indy has played four (at the time) undefeated teams and the Pats have played none. Something is wrong and it needs to be fixed.

Until that time all I can say is this:

WOOOO BABY, STILL UNDEFEATED! STICK THAT IN YOUR UNDER-INFLATED BALLS AND PUMP IT! WOOOO!

Whew… sorry… back to business…

This week the undefeated Patriots are taking on a team that ruined a perfect season for the 2007 Patriots. Not just 2007, but when all of the New England market wanted the New York Giants for revenge in in Superbowl XLVI. They got them and it didn’t taste as good as they might have thought, because the Giants beat them in the big game, again. Needless to say, there is a severe underlying of hate between these two teams that will certainly bubble over this Sunday when they clash. The only similarities from those two meetings to this one are the coach/quarterback combos. Bill Belichick and Tom Brady vs Tom Coughlin and Eli Manning.

Yes, I saw Eli throw six touchdowns in the game against the New Orleans Saints, but let’s be real for one minute. It’s the Saints! I could throw four against them. Hell, Marcus Mariota just did on his way to a win against the Saints. So they are in no way, shape, or form, comparable to a defense such as the Patriots who have only allowed 162 points through eight games. In other words, the Giants will fold against an elite defense such as the Patriots.

News recently broke that Patriots’ pass-catching back, Dion Lewis, will miss the remainder of the season due to a torn ACL suffered against the Washington. While this is certainly troubling for the team, Lewis is not considered “irreplaceable” like the four major players on the offense. Of course the big three: Tom Brady followed by Rob Gronkowski and Julian Edelman. Just recently added to that list is the undrafted rookie free-agent center out of Georgia, David Andrews. Those four players are essential and “irreplaceable” to this team’s offense. As long as those four are playing this well-oiled machine will not slow down one bit, even without the slippery Lewis. As is commonplace in New England, the next guy up will have to “do his job”.

Key Matchup
Bill Belichick vs Tom Coughlin
If Belichick is the football Jedi Master in New England, consider Coughlin the Sith Lord whom Belichick cannot defeat. It is undeniable. In fact, since 2008 Tom Coughlin and the Giants are the only team in the NFL that Belichick and his band of Patriots have not beaten. Not only are the Pats winless against Eli Manning, Coughlin, and the Giants, but two of those losses were for rings. The only time Tom Brady, Belichick, and the Pats have lost in the Superbowl has been to this team with this head coach. Has Coughlin discovered some magical formula to defeat the Patriots? If so, why is Coughlin the only one who has, and why haven’t other coaches picked up on what he has done to beat the unbeatable?

All the game tape and statistics point to one thing. Coughlin has consistently been able to get pressure on Brady by only rushing four and dropping the rest of the D into coverage. He also he brings defenders up tight on the slot receiver to jam before dropping into coverage, causing the ever important timing of Brady and his wideouts to be disrupted. In both of the big games this defensive tactic was effective. Even against the 2007 Pats team that statistically was the best offensive ever. Not only that, but the Giants were a 9-7 wild card team out of the NFC that year, making these matchups even more about the coaches. With a less talented roster Coughlin has continuously owned Belichick!

Can Bill break the choke-hold of Coughlin and the Giants? How come so many other coaches go against Belichick and out-think themselves? Why does this not happen to Coughlin? Is Coughlin the only coach out there who looks across the field and isn’t intimidated in the least by Belichick and the Patriots? Will Coughlin stop this revenge-fueled locomotive engineered by Bill Belichick?

So many questions and underlying storylines for this game and I can’t wait for them to be answered!

Player to Watch
Tom Brady
If the previous about the Pats’ current losing streak to the Giants is true – which it is – it means Brady has a losing record against a Manning and we all know his first name is not Peyton… or Archie for that matter. Unbelievable, right? Both of Eli’s Superbowl rings has come right off the fingertips of Brady. I have to believe wherever the Manning family has Thanksgiving dinner, Eli has his rings on. I also have to believe that when Eli and Peyton are sneaking a beer with each other Peyton must say: “Hey little bro, tell me how to beat Tommy, pleaseeee?”

Brady is an extremely competitive guy so you can bet those two loses at the big dance to Peyton’s younger brother still sting a little. He may have denied to the media at his weekly Wednesday press conference, but any Patriots or Giants fan have been able to see the fire whenever these teams have played since those championship games. Even in the preseason.

All season I have written about how the Pats are on a “scorched earth tour” and how their quarterback has been playing pristine football. If those opinions are facts, than this should be the perfect game for both of those things to be made apparent. Which team would Bill Belichick, Tom Brady, and the Patriots appreciate beating more than a team they haven’t been able to best in almost a decade? Also, if Brady usually struggles against a Tom Coughlin defense (no matter the talent), and even though he is now playing at a higher level, will this be the game he looks his age, if only for one game?

This is another matchup within the matchup and this game will be packed full of such.

Brady has 22 touchdowns to only two interceptions on the season. He will play against a Giants secondary that two weeks ago allowed seven passing touchdowns and let up 52 points in that same game. This should go down as one of Brady’s greatest performances Sunday performances

Game Prediction
This should be a competitive game featuring two equally matched coaches. A quarterback on the opposite team that either isn’t scared of Brady or is too stupid to realize he is scared. It being away game for the Patriots is not much of an advantage for the Giants, but at least they aren’t at Gillette. The only problem for the Giants is Tom Brady is on the other team.

I can’t see a situation where the Giants defense stop Brady’s bunch on one single drive this Sunday. I mean, Drew Brees is no pushover ,but is he on the same playing level as Brady? Is anyone? Nope. That’s my point!

If Brees tossed seven scores against this Giants secondary, Brady and offensive coordinator Josh McDaniels must be watering at the mouth over this matchup that could potentially blow this passing game of the Pats even more wide open.

The Giants themselves have a tough passing attack to stop, with the cannon arm of Eli and the uncanny catching abilities of last season’s rookie of the year, Odell Beckham Jr.. As well as the Rueben Randle who has been consistently getting targets from Eli and has been turning them into touchdowns on a week-to-week basis. The biggest worry for the Patriots’ defense is the pass-catching back of the Giants, ex running back for the Patriots, Shane Vereen.

Not only has Vereen practiced against the Pats defense for much of his career, he was also a major part of the Pats’ offense and can now relay tendencies and situational play-calling of the Pats, helping the defense of the Giants. And they will need the help because they certainly cannot do it on their own. Look for Vereen to start this Sunday and to be involved with the offense more than normal. After all, in last year’s Superbowl win over the Seahawks, Vereen was responsible for 12 catches and countless 3rd and short conversions. Believe you me, Coughlin went to Vereen and asked questions. Vereen is an extremely smart player and I’m sure Coughlin got his answers and went to work this week with his defense.

As for the defense of the Patriots, they are playing really well as a unit. Players are swarming to the ball carrier and the front seven might be the best group in football. Since the Week 1 gashing by Deangelo Williams they have not allowed a back to eclipse 100 yards. That was eight games ago, and while the Giants have not been running the ball well so far this year, it will be important this week in order to get the passing game going. Can the Pats stop the four different backs the Giants have been using to establish a ground game?

As for Odell Beckham Jr., the answer is very simple. Put Malcolm Butler on him with Devin McCourty over the top, protecting the deep ball. Eli routinely eats on the deep ball to his buddy Odell. The Patriots need do their best to eliminate Beckham from every play on Sunday, forcing Eli to go elsewhere with the football, essentially making Beckham invisible to his quarterback. If they are able to take Beckham out of the game, there is no way tight end Will Tye and Rueben Randle are going to roast the Patriots defense enough to sway the game.

The key to a Patriots win is the absence of Beckham. Cut off the snake at the head!