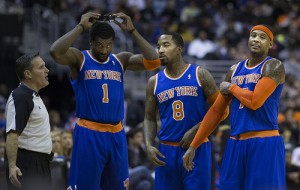 “I don’t think we had enough opportunities to play together,’’ Amar’e Stoudemire said in the Heat locker room Monday. “I moved to the bench and [became the] sixth, seventh man. When I was in the game, Melo, he was out of the game and vice versa. When we did play together, we showed some flashes of what we could do on the pick-and-roll.

“I don’t think that pick-and-roll offense between Melo and I was ever taken advantage of, which we could have. The way he shoots the ball, handles the ball from the outside and the way I attack the rim, it could’ve been a pretty good combination. I don’t think the coaching staff at the time really bought into that.’’

The Amar’e Stoudemire-Carmelo Anthony pairing never got past the second round of the playoffs in four springs together.