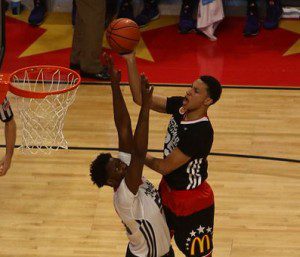 Ben Simmons is going to make some NBA team – maybe the Celtics but definitely not the Knicks or Nets – very happy sooner rather than later.

Think Lamar Odom pre-Kardashian with the size and skill set to play and defend all five positions like the Warriors’ Draymond Green. He’s the prototype point forward who is unselfish to a fault and good enough to be making a contribution in the NBA right now.

“He’s a very unique player,” says Marquette head coach Steve Wojciechowski. “Because of his size, athleticism and his ability to handle the ball he is unique.”

In only his fourth college game Simmons, a 6-foot-10 LSU freshman, finished with 21 points and 20 rebounds in an 81-80 loss to Marquette in the opening game of The FanDuel Legends Classic at Barclays Center. Simmons fell three assists shy of a triple-double only because his teammates made just 21-of-59 shots from the field and 8-of-27 three-pointers.

“You’d like to see him take over a little more,” said one of the dozen NBA scouts in attendance. “He wants to set up his teammates which is good. But there are times when he should create for himself.” Daily News