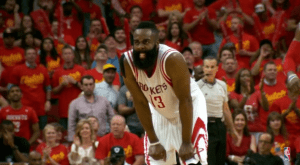 A veteran scout who’s seen the Rockets multiple times already this season characterized James Harden‘s defense as “very indifferent,” and that Harden’s offense hasn’t been near good enough to make up for it.

While the scout didn’t have first-hand knowledge about the Rockets players’ happiness or unhappiness with Harden, he said Harden “only passes when he has to — I would not like playing with him or Dwight Howard unless I was a Steve Novak or someone who just stood in the corner and got open threes.”

The dropoff is noticeable. NBA.com