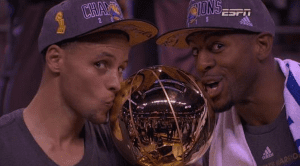 Golden State wasn’t the first champion to lean on small ball, but no team had ever gone that small, for that many minutes, on the league’s biggest stage. That move now has coaches across the league reimagining the limits of small ball and the very nature of the sport itself.

“This is a copycat league,” said Randy Wittman, who has Kris Humphries jacking 3s and Jared Dudley working as the Wizards’ closing-time power forward. “The success of Golden State has propelled coaches to play more small ball than maybe they even wanted to. More teams will push the envelope.”

The Warriors even surprised Mike D’Antoni, who was ahead of everyone but Don Nelson in the small-ball revolution. “Shoot,” he said, laughing, “maybe we didn’t even go small enough in Phoenix.” ESPN