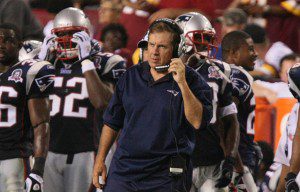 I usually start this every week by talking about last week’s game. With the massive implications of this upcoming Sunday Night  Football game, the WIN against the Bills is now irrelevant. Now I will turn my attention directly to the Broncos as the Patriots have all week.

In three of these previews this season, I have referred to the Week 12 matchup against the Broncos as the game that will test the Patriots most before the playoffs. Now that it has arrived, it is going to look absolutely nothing like we assumed it would at the midseason mark.

The Patriots will be without Dion Lewis, Julian Edelman, and now Danny Amendola. While the Broncos will be without Peyton Manning and slot receiver, Emmanuel Sanders, will be hobbled if he plays at all. Both teams are banged up on the offensive side of the ball, but both teams boast a magnificent defense. Denver is ranked as the first defense overall in the NFL and the Patriots are second. The amazing secondary of the Broncos will facing a banged up Patriots’ passing attack. While the superb front seven of the Patriots will be causing havoc for the cherished run game of Denver and the rookie quarterback, Brock Osweiler.

If I told you in back Week 1 that this game would be one of the best defensive matchups of the season, would you have believed me?

I wouldn’t have either.

Player to Watch
Brock Osweiler
Welcome to the NFL. The only thing worse than making the second start of your career against Bill Belichick and the Patriot defense is making your first start against them. Belichick is notorious for making things extremely difficult for young and inexperienced quarterbacks. He takes away their first option and makes them go through their progression. He has proved time and again that this strategy against young quarterbacks is remarkably effective and Sunday night will prove to be no different.

Brock Osweiler is going to be under pressure early and often, testing the mobility and decision making of the young quarterback. Osweiler’s number one option, Demaryius Thomas, will be blanketed by Patriots’ shut down cornerback, Malcolm Butler. With Butler on Thomas and Patriots’ safety, Devin McCourty, over the top, Osweiler will be forced to look elsewhere. This is something the Chicago Bears could not do in Osweiler’s pro debut. More importantly, if Osweiler could only manage 17 points against the Swiss chesse defense of the Bears, how will he do against the defense that allows the fewest points per game?

An enormous test for a young quarterback against an undeniably stout defense. Yet another layer to this long awaited game.

Key Matchup
Brandon LaFell vs Aqib Talib
When Aqib Talib was a member of the New England Patriots this was a matchup I am sure happened many times throughout a full practice week. While we will never know for sure the outcome of those one-on-one drills, one can speculate. The size of “Jojo” LaFell I am sure will give Aqib fits throughout the night, along with his route running abilities it could be a long night for Talib.

The sheer volume of targets Brandon LaFell will be seeing in this game will he more than he has seen all year. With three major parts of the Patriots’ passing attack injured, LaFell will be the only wideout on the field that has previous experience with Brady past this season. Brandon was injured to start the season and made his return Week 7 against the New York Jets. Since his return against the Jets, LaFell has not had a game with less than 50 yards receiving, but has yet to find the end zone. That should change Sunday night.

Aqib Talib spent two season in New England before settling in Denver with his baffling overpayment. Yes, he is extremely talented. And yes, the off-field issues seem to be a thing of the past. BUT his biggest downfall seems to be that he is scared of big game situations and this is a HUGE game.

While he was in New England there were two instances that stand out in my head.

In 2012 when the Pats played Denver in the regular season, the winner of that game would secure the No. 1 seed, a first-round bye and home field advantage throughout the playoffs. In the first quarter of that game Broncos wideout, Demaryius Thomas, ran a beautiful double-move and absolutely roasted Talib. How did Talib answer? He came up lame and sat on the bench for the remainder of the game. He returned the following week against a bum New York Jets team. Coincidence? Doubtful because he did it a year later in playoffs against the Indianapolis Colts.

Talib = Chump. Lafell is about to explode!

Game Prediction
Sunday night cannot come fast enough! This game will be a heavy hitting, smash mouth, well fought slobber-knocker. These two teams have developed quite the rivalry over the past few seasons and even without Manning the Broncos are to  be taken seriously as this game has huge implications. The winner of this game will very likely be the No. 1 seed in the playoffs out of the AFC. While the loser will end up playing an AFC Championship game away from home.

With all that being said, I can see the Pats coming out on offense with the “Jumbo” set and running the pigskin off of the ball. Although the Broncos are fourth in the league against the run, Legarrette Blount has great success against speedy undersized linebackers in the middle. That is exactly what the Broncos have on defense. Blount will work his way through the line and will lock in on those backers before he runs them over. I expect the Pats offensive coordinator, Josh McDaniels, to run the ball early and often to slow down the relentless and intimidating edge-rush of the Broncos led by DeMarcus Ware and Von Miller.

During the offseason Broncos president of player personnel, John Elway, clearly constructed a defense because his quarterback is aging and deteriorating. When he put it together though, it was made to beat the Patriots and Tom Brady. So as big of a test as this game will be for both teams as a whole, it will be very interesting to see if Elway succeeded with his Frankenstein defense.

Just a reminder: Tom Brady is still Tom Brady no matter who is on the field. That why I believe the Patriots will take this game.