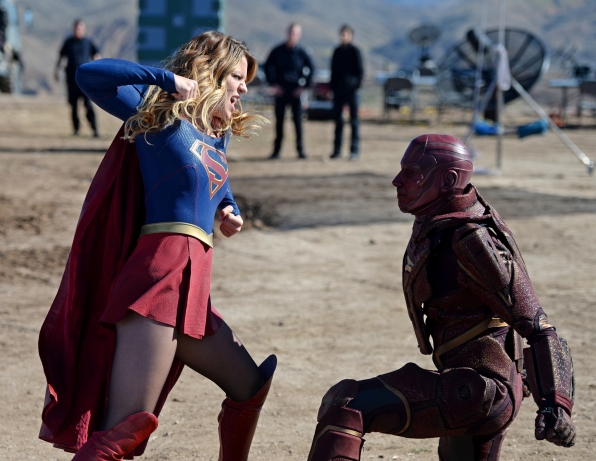 Oh my god, you guys, I love Cat so much! And yes, that was my major takeaway from last night’s episode of Supergirl. Then again, perhaps it was only inevitable, since I am majorly obsessed with cats and snarky female leads.

Cat yet again proved herself to be like an onion, or an ogre, if you will: layered. She sticks up for Kara again this episode, this time to her witch of a mother. I love seeing Cat let tiny cracks of her true character break through and prove that she actually does care about Kara. The confrontation with her mom also gives us another glimpse into why exactly Cat is as prickly as she is.

The best part, though, was watching Cat impart her wisdom to Kara. It’s no doubt that Cat is smart – she can’t be Queen of Media without being so – but Cat is particularly wise to the rules of our (sometimes) messed up society. She tells Kara, “whatever you do you can’t get angry at work, especially when you’re a girl.”

Yeah, it’s times like that when Supergirl can sometimes be a little too afterschool special-y. But it’s so unique and refreshing to have a show that actually addresses these important issues that need to be talked about rather than glossed over like they usually are. It’s great to see the writers of Supergirl address that the shit that Superman or Clark Kent can get away with aren’t things that Kara and Cat can.

From the previews of last night’s episode, however, I thought that Red Tornado would be a completely sentient robot. So, needless to say, I was a little disappointed to find out that he was, for the most part, being controlled by a vengeful human. Really, though, how could General Lane fire someone in such a heartless way and not expect him to come back as a super villain?

Nevertheless, Red Tornado was a fun, if easily disposed of, adversary for Kara to face – although, can someone please explain to me what exactly the science behind Kara flying into the tornado to stop it was? Clearly Supergirl is enjoying taking its time with these monster-of-the-week stories, which is great, but can we get to the answers part already?

Like, we get it, Hank has cyborg eyes, but when are we actually going to find out if he’s evil or not? Because, honestly, I’m so confused at this point. This episode alone Hank stands up to General Douchebag (shout out to How I Met Your Mother, miss you) when he starts bullying Kara again. But then just a few minutes later we find out that Hank mysteriously disappeared with Jeremiah, only to turn up alone and unscathed. What’s the deal, people? Is he evil or nah?

Speaking of General Douchebag, ugh, fine, General Lane, I had already decided that I didn’t like Lucy after she swooped in and ruined #Jara – and let me tell you, I’m one for holding a grudge. It didn’t seem that Lucy could suck any more until this episode, when she proved that she was almost as big a bully as her dad is. And her dad is a piece of work. Combined with Cat’s mom, the pair could probably kill a person with their glare power alone.

I swear, though, it’s only a slight bit of bias, because when you think about it, Lucy is kind of a crappy person. First, she basically, although possibly subconsciously, rubs her and James’ relationship in Kara’s face at game night. Then, she just leaves James alone with her dad, who she knows he doesn’t like, right after things get awkward at dinner, instead of staying and playing buffer. Lastly, she joins her speciest-ist dad in bullying Supergirl, who never did anything to Lucy.

We can all agree that unless we actually start seeing some real change from Lucy she’s going to be relegated to the theoretical table where all the other asshole characters, like Maxwell Lord, eat lunch. Oh yeah, and if Max and Alex could stop flirting PLEASE, that would be great. I don’t get this whole Max has a good side to him that Alex seems to be believing. No. He’s mean and sneaky and definitely has something shady planned.

At the end of the episode Kara gets a cut and actually bleeds. Gasp. Now, I’m not totally familiar with the logic behind Kryptonian powers, but are we really supposed to believe that right after expressing her desire to be normal, Kara is finally cursed with normality? I do, however, love that it’s something that Kara wants so badly. Her desire to still have game night just proves how deep that wish runs. And even though Kara would believe otherwise, the fact that she does end up having game night illustrates how unique Supergirl is as a show.

Oftentimes superhero shows are dark and twisted to the point of featuring main characters without a shred of normalcy to their lives. But things like game night and heart-to-hearts happen so often in Supergirl that it’s kind of sweet to think that, hey, even though this person is way cooler than I am, they’re just like me, and want to be normal just like I do. Kind of like seeing a celebrity pick up their dog’s poop, except not.

Next week’s episode of Supergirl looks interesting, and if I’m not mistaken it’s the midseason finale, which probably means that it’ll deliver. If anything, we’ll get to see why it’s so significant that Kara can actually bleed, and maybe screw with some of the rules of superpowers.