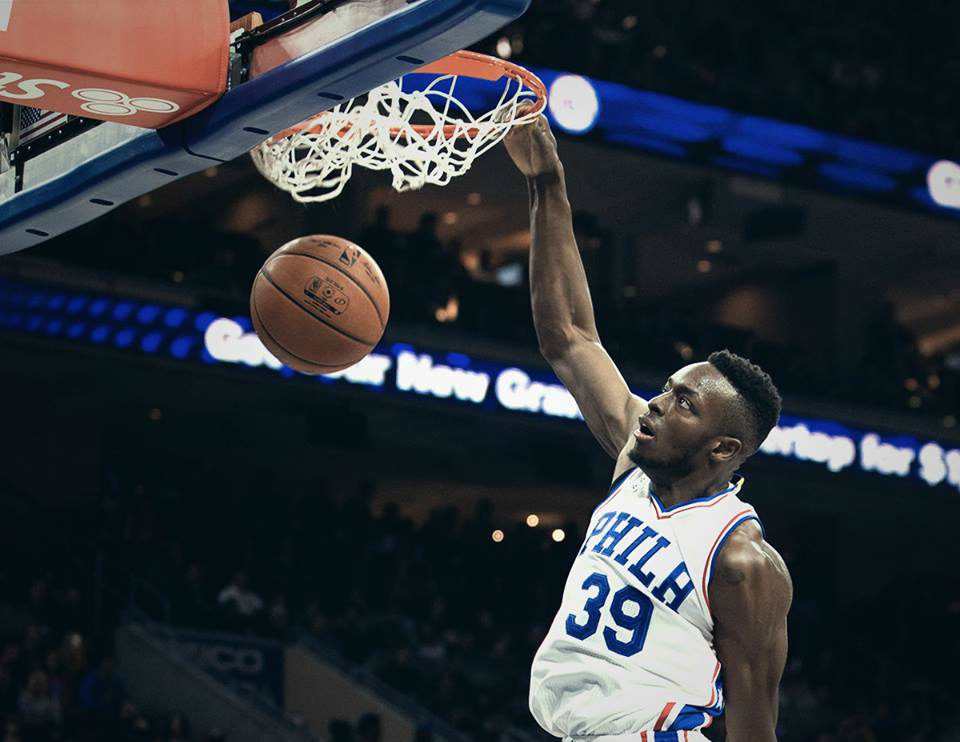 As the clock trickled down and the final buzzer rang, the end of an era had finally arrived. On a night dedicated to the late Moses Malone, the city of Philadelphia said their final goodbyes. Goodbye to Moses, may he rest in peace. Goodbye to Kobe Bryant, you were truly a once in a lifetime talent; and most importantly, goodbye to the losing streak, which had haunted the franchise since their last victory…28 regular season games ago. In their 103-91 victory over the Los Angeles Lakers Tuesday night, the Philadelphia 76ers ended the historic streak which spanned over the course of 9 months dating back to the 2014-15 season. Nine freaking months without a victory! Do you realize that a baby could have been conceived and delivered during that time period? It doesn’t matter anymore because the streak is a thing of the past. For the night, the city has a victorious basketball team. For the night, the team can celebrate, and for eternity, 76ers players will brag about the time they spoiled Kobe Bryant’s farewell game in Philadelphia.

From tipoff, Kobe was in 81 point mode. The scoring assassin who earned legendary status for his ability to get buckets looked to do just that Tuesday night. Focused on putting a dagger in the hearts of Sixers fans one last time, Bryant came out the gates firing, connecting on 3 three pointers in the game’s first 90 seconds. Kobe, who shot 29.3% from the field and 20.6% from beyond the arc in the month of November, finished the first quarter with 13 points on 5/10 shooting in seven minutes of action.

The Sixers, unfazed by Bryant’s early onslaught, matched the Lakers point for point, beginning with back to back three pointers from Robert Covington (23 pts, 5/11 3pt) and Isaiah Canaan (12 pts, 5 ast), followed by a 7-0 run minutes later to take a 26-23 lead. With Bryant on the bench, the Lakers responded, going on a 10-0 run in the final 2:40, led by former Sixer Lou Williams (9 pts), to take a 33-26 lead at the end of the first quarter.
In the second quarter, both teams struggled to find the range. After cutting the Lakers lead to six, the Sixers went ice cold as they were held without a field goal for over four minutes of action. During this stretch, the Lakers were able to push the margin to 14, led by Julius Randle (12 pts, 11 rbs) and slick passes from rookie De’Angelo Russell (12 pts), who led all players with 4 first half assists. Luckily for Philly, the Lakers’ stagnant offense in the final minutes of the 2nd quarter allowed the 76ers to stay afloat. After a Nik Stauskas (6 pts) drilled a three pointer with 7.8 seconds remaining, the Sixers entered the locker room trailing 58-50 entering the second half.

Using their momentum from the end of the half, the Sixers began the 3rd quarter on a 6-0 run and held the Lakers scoreless until a Jordan Clarkson (19 pts, 5 ast) basket with 8:25 remaining put the Los Angeles on the board. As a whole, the Lakers were awful in the 3rd. Other than Clarkson, who had 12 points on 6/10 shooting in the period, the rest of the team scored only 5 points on 2/12 FG. Bryant, who was electric to begin the game, missed each of his four field goal attempts in the quarter, scoring a measly 1 point off on a technical foul shot. On the other hand, the 76ers couldn’t miss. Ignited by Robert Covington’s 9 third quarter points and shut down defense on Bryant, the Sixers converted on 11 of their 22 field goal attempts, including 5 three pointers, as they outscored the Lakers 30-17 to take a 80-75 lead entering the 4th quarter.

For the Lakers, hot shooting from the 76ers wasn’t their only problem. With 6:54 remaining in the period, 7’2 center Roy Hibbert (6 pts, 10 rbs) got tangled up with 6’0 guard Isaiah Cannan, prompting Hibbert to push the smaller Canaan, which escalated into a shoving match between both teams. In the process, Hibbert shoved a referee and threw a forearm into the face of Jerami Grant (14 pts, 7 rbs, 4 blk), yet, inexplicably, was not ejected. Hibbert, Jakarr Sampson and Jerami Grant all received technical fouls for their roles in the fiasco.

Prior to their matchup against the Lakers, the 76ers held 4th quarter leads in each of their last 5 games…all of which resulted in losses. Over the course of the season, maintaining leads have been Philadelphia’s kryptonite. Regardless of the opponent or the score, the 28 game losing streak taught us that if the Sixers have a lead, they’ll probably blow it. That wasn’t the case Tuesday night. Holding a 5 point lead entering the 4th quarter, the Sixers put a choke hold on the game, converting on back to back three pointers in the opening minutes to stretch the Philly lead to 14. Kobe Bryant then went into hero mode; as he attempted to single handedly carry his Lakers back into the ball game. Unfortunately for Kobe, a combination of old legs and stifling defense from Covington and Grant, led his efforts astray as he shot 1/6 for 3 points in the final period. With the Sixers leading 94-80, the Lakers went on a quick 8-2 run in a little over a minute, cutting the lead to 8 and prompting Brett Brown to call a timeout. Moments later, Hollis Thompson (12 pts, 5 rbs) hit a corner three, pushing the Sixers lead back to 11 and ending the Lakers comeback hopes for good.

Game Notes:
• Nerlens Noel returned after a two game absence, scoring 14 points and grabbing 9 rebounds in 29 minutes off the bench.
• The 76ers had six players score in double figures (Covington, Grant, Okafor, Canaan, Thompson and Noel).
• Robert Covington did not register a steal in 34 minutes of action after averaging 7 steals in his previous three games.
• After concerting on 3 of his first 4 shots, Kobe Bryant shot 4/22 (18%) the rest of the game, finishing with 20 points on 7/26 FG (4/17 from three) with a minus 21 +/- rating.