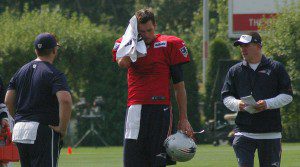 What a freakin’ game! Holy football! That was without a doubt the best football game this regular season. It had everything. Stout defense, great offense, special team mishaps, you name it and it happened. Heck even the young guy Brock Osweiler looked good…

Hey wait, where are you going?

Ohhhh, I get it! You thought you were going to come here today and laugh at my me whining about the Patriots first loss. Hate to break it to you but you couldn’t be more wrong. I could complain about the incompetent game calling of the referee’s. I could be ranting about the horrendous play calling of Pats offensive coordinator, Josh McDaniels, before halftime. I could go on and on about the many things that led to the first loss for the Patriots, but the truth is: That should not have even been a close game!

The Patriots have been completely decimated by injury and that continued into the game last Sunday night. By the fourth quarter last night, the Patriots offense was without: Dion Lewis, Julian Edelman, Danny Amendola, and Rob Gronkowski. Basically options number one, two, three, and four for Tom Brady. In some sets in the fourth quarter Brady’s options were Brandon LaFell, Keshawn Martin and Scott Chandler. That offense still drove down the field with one minute remaining and allowed the best kicker in football a chance to tie it. They also hung up 30 on the best defense in the league.

This Patriots team is not upset with the loss at all and neither is the fan base. This team may look thin now, but come playoffs this offense will be right back to where they left off, crushing teams.

As for now, it’s on to Philadelphia.

Player to Watch
Jamie Collins
After not playing a game in the month of November, or practicing for that matter, Jamie Collins is set to make his return to the field Sunday. An unspecified illness has kept Collins away from the team for close to a month and although the team has not suffered greatly, an overtime 48-yard touchdown run to end the game last Sunday night in Denver, showed how important he is to this defense. Seeing that he finally returned to practice last Friday, but did not play Sunday, is evidence that Belichick plans on having him against the Eagles. It is customary in New England after a long absence to return to the team on such a schedule before the player suits up in a game again.

Collins is the capitan of the defensive unit and an emotional leader. He is 6’4 which is very tall for a linebacker, but perfect in coverage of tight ends. Along with his abnormal height for the position, he is extraordinarily fast making him lethal on blitzing. Being that he was drafted by New England, he has been hand groomed by that coaching staff and his football IQ is through the roof at such a young age.

His return to this defense will do wonders for their confidence. They will need the boost considering over the next few weeks the offense will be working harder than normal to score points with the amount of injuries they will have to overcome. Be ready for this team to step the defensive pressure up behind captain, Jamie Collins. As long as Collins can return and stay healthy that will allow fellow linebacker Dont’a Hightower to fully recover from a sprained knee suffered Sunday night.

As for this game, the Eagles like to run a a lot if plays geared towards their running backs and tight ends. In fact, over 40 percent of the Eagles offensive plays go to their backs and 20 percent to their tight ends. That means the fastest paced offense in the league is throwing 60 percent of their plays to a players covered by a linebacker or a safety. Normally that would be a mismatch, but the Patriots have Jamie Collins. His presence will be monumental for the Patriots to avoid back to back losses for only the fifth time in the Belichick era.

Key Matchup
Patrick Chung vs Eagles RBs + TEs
If Jamie Collins is the captain of the defense, then Chung is the star. Was there a single play for the Pats’ D you didn’t see number 23 in on against Denver? What an amazing return to the Patriots this season has been for Chung. After playing a few seasons for Philadelphia, Chung returned to the Pats and his skill set is being utilized to absolute perfection. He isn’t quite a safety but he also isn’t a cornerback or a linebacker. He is a hybrid, coverage-blitzer, who can matchup with any back or fast slot guy or tight end. I know that’s not really a position, but that’s what he has been playing this season, and at a Pro-Bowl level.

As I previously wrote, backs and tight ends account for 60 percent of the Philadelphia Eagles offensive plays. The Patriots are sure to counter this with Jamie Collins, but they will not expect him to do it all throughout the game. When Collins is resting or blitzing, the responsibility of those play makers will be that of Patrick Chung‘s. With the speed of a safety and the strength of a linebacker, he has become essential to the Pats’ D, especially now with the shaky health of Hightower and the snap count Collins might be on.

Chung will be asked the most of over the next few weeks, maybe more than ever before in his career. A great test to see if he can handle the pressure will be this game against this Eagles offense that plays at a fast pace and will be keeping Chung awfully busy over the middle.

Will he show his maturation is complete and be ready for the onslaught of coverage Philadelphia will force him into? It is his old team so he could be looking for revenge. No better way to do that than shutting down whoever he covers.

There is not a better team for the crippled Patriots’ offense to run into right now than the 25th ranked Philadelphia Eagles defense. Coming off back-to-back games where the Eagles allowed 45 points, Tom Brady has to be licking his chops. With his offensive line reshuffled, again, Brady will be looking to get the ball out as quick as possible. With Danny Amendola practicing on Wednesday his availability for this week will be up in the air until game time, and if he does play he will likely be on a snap count. This week will give Brady an opportunity to work out some kinks he may have with his new starters, Keshawn Martin and Damaris Johnson.

As for the Patriots’ defense, it seems as though they will be at full strength for the first time a few weeks with the return of Collins. Excellent timing for the Patriots because the Eagles’ offense is the fastest moving in the league and they have a plethora of weapons. Both over the middle with their extremely athletic tight ends, Zach Ertz and Brent Celek, as well as the their wideouts. Also the trio of backs they have can literally do it all. Between DeMarco Murray, Ryan Mathews, and Darren Sproles there is not a skill that cannot be performed and head coach Chip Kelly uses his diverse range of running backs in many different ways.

Although reports have surfaced that Kelly’s players have checked out on him and his philosophy, it has yet to be proven. I understand 45-points allowed in two-straight loses should be enough proof, but I don’t think there is a team in the NFL that would just lay down and allow the Patriots to win. Sam Bradford will be making his return from concussion protocol and as mediocre as he may be, it is highly doubtful that he will give up on the head coach that gave him the second chance of his career. This is all just speculation of course.

I expect the Patriots’ offense to find some success running the ball behind the reworked offensive line. Blount should see his usual 20 carries in a December game. This is the time of year when Blount is even more valuable because the colder it gets, the less fun it is to try to tackle that monster. With all the injuries to Brady’s pass catchers, the play-action pass will be more important than ever to allow Brady time to go through his progressions. Brady’s health is more important now than ever. No matter how great of shape Brady is in, he cannot take the beating for the remainder of the season that he has in the last two games. Between the game against the Bills and the Broncos, Brady was hit over 20 times! That’s far too much for a 38-year-old who has been playing for 15 years. The combination of Blount and the O-line restructuring should start to relieve pressure on Tommy this week.

As depleted as the Patriots roster is, it is still hard for me to pick the less interested and talented, Philadelphia Eagles. Not just that, but doesn’t every game seem like Chip Kelly’s last? Even after he was granted full control of his roster in the last offseason. More on that here.

With all things considered.