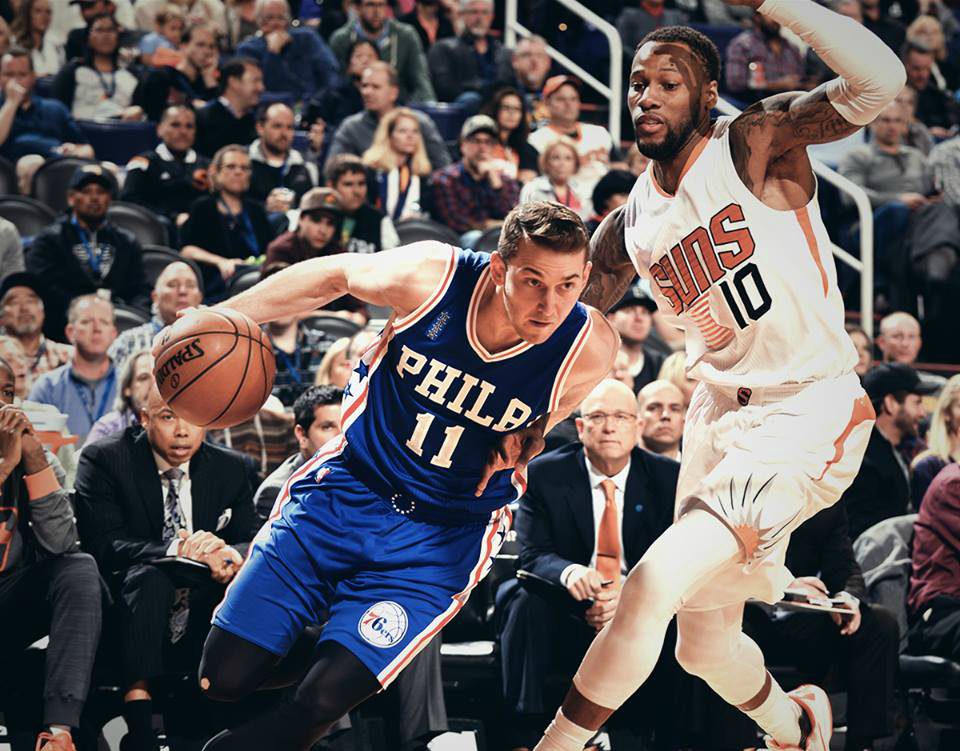 Santa Claus arrived a day late, but gave Philadelphia the best Christmas gift the city could ask for; a 111-104 victory over the Phoenix Suns on Saturday night. Led by newly acquired point guard, Ish Smith, and strong shooting performances by the Sixers second unit, the Jahlil Okafor-less 76ers spoiled the holiday cheer in Phoenix, defeating the Suns to snap their 12 game losing streak and gain their first road win of the season. With the speedy Smith running the show, the Sixers decided to push the tempo, getting out in transition and using an early 11-0 run to take a 14-point lead (29-15) at the end of the 1st quarter. Philly’s defense was phenomenal to begin the game, forcing the Suns into six turnovers, 5-21 (23.8%) shooting from the field, and 0-7 from three in the opening period. Phoenix, the fourth highest scoring team in the NBA (103.7 ppg) would respond in the 2nd ignited by rookie Devin Booker who dropped 11 points in the final six minutes of the quarter, helping the Suns outscore the 76ers 30-22 in the period and slashing Philly’s lead down to six (51-45) at the break.

In the second half, Phoenix would continue to fight, taking a four-point lead midway through the 3rd quarter, until dead-eye shooting from the 76ers’ bench helped Philly steal the momentum. With the Sixers trailing 75-74, Nik Stauskas, drilled three consecutive jumpers, including back-to-back three-pointers, followed by another three from Kendall Marshall that capped an 11-0 run and gave 76ers a 10-point lead entering the 4th. In the final period, the Sixers were able to stretch their lead to 16, but eight quick points from Phoenix’s Jon Leuer helped the Suns cut the lead down to six with a minute left in the ballgame. Thankfully, clutch free-throw shooting and a huge basket from Ish Smith helped the 76ers prevail and hold on for their second win of the season. Philly had five players hit the double figure mark: Isaiah Canaan had a game high 22 points, Stauskas scored 17, Carl Landry contributed 16, while Ish Smith and Nerlens Noel added 14 apiece.

Brett Brown on Smith: “He makes things a lot easier for the people around him. He makes them better.”

Ish Smith has never been a star in the NBA; in fact, he’s been quite the opposite. With career averages of 4.2 points and 2.6 assists per game, you won’t see Smith’s name on any All-Star Ballots, and who knows, he might not even be on the 76ers’ roster next season. Yet, currently speaking, he might be the most important player on this Sixers team outside of anyone named Jahlil. What Smith brings to the table goes far beyond numbers and highlights. With Ish running the show, for the first time all season, the Sixers will have a viable playmaker, capable of getting shooters open and stabilizing Philly’s over fluctuation of turnovers. If you want proof, just look at the numbers. Against the Suns, the Sixers converted on 48.1 percent (38-79) of their field goals, 44.4 percent (12-27) of their three-pointers and went to the line 27 times, all well above their season averages.

The Sixers frontcourt will also benefit from Smith’s addition, especially Nerlens Noel who last year, put up career numbers with Ish heading the offense. Noel, who called Smith the “first real point guard” he’s ever played with, saw his offensive production increase rapidly from 8.4 points on 44.7 percent shooting to 13.3 points on 48.6 percent after Smith was acquired on February 23rd of last year.

Nik Stauskas
After going scoreless in his previous four games, a big night from Stauskas was much needed for the Sixers sake and for his confidence. Against the Suns, Nik looked like the player 76ers fans thought he’d evolve into when the team traded for him last summer. For the first time in quite a while, Stauskas confidently looked for his shot and released at will, despite his recent shooting slump. On multiple occasions throughout the game, he also attacked the rim with ferocity, throwing down a two handed jam revealing a hidden level of athleticism that he very seldom puts on display. After averaging only his 4.4 points on 21.4 percent from beyond the arc in his last 10 games, expect Nik to take on a bigger role in the Sixers offense with Ish Smith’s ability to penetrate the defense and create open shots for on the perimeter.

Games Notes
• Jahlil Okafor – DNP (Right Knee Soreness)
• Markieef Morris – DNP (Suspension)
• Eric Bledsoe had to be carried off of the court in the 2nd quarter with a left knee sprain (would not return).
• Richaun Holmes sprained his right knee in the 3rd quarter (would not return).
• Ish Smith ranks 5th in the NBA in assists to turnover ratio.
• The Sixers (17.9) and Suns (16.2) are the two leading teams in the NBA in turnovers.
• Philly shot 23-27 (85.2%) from foul line, well above their 69.6 percent season average.
• The 76ers will fly to Utah to take on the Jazz on Monday night at 9:00 PM.