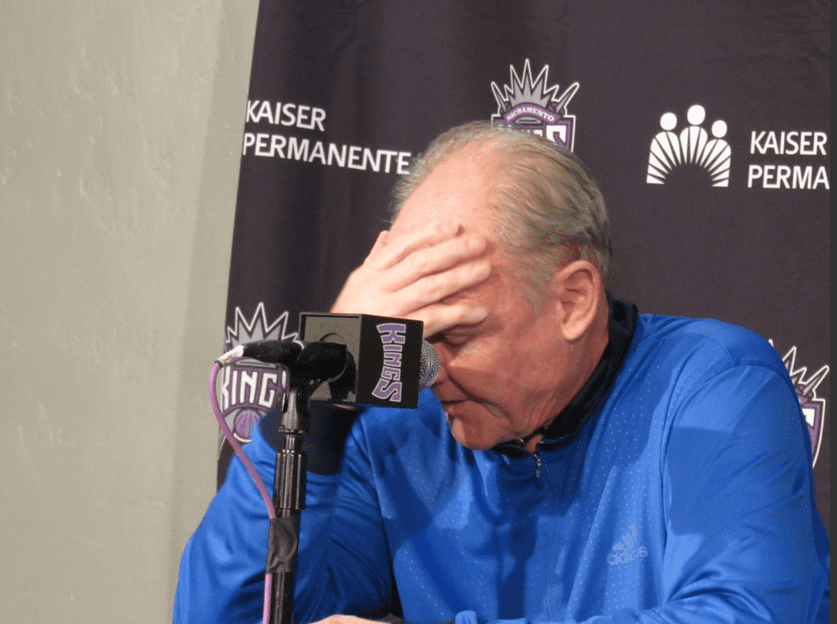 It is becoming evidently apparent that the Sacramento Kings are not a playoff caliber basketball team. Heading into Sunday’s game, Sacramento was only a half of a game out of the eighth seed in the Western Conference standings. With one of the least difficult stretches coming up for the Kings, it was a chance for the team to create some separation between themselves and the rest of the playing field.

The Kings have continually turned belly-up in the face of adversity. Tonight, Sacramento completely disrespected their opponents ability to compete and had a sense of entitlement for victory. In the most disappointing losses for the Kings this year, we have seen this exact mentality. This is the folly of the Sacramento Kings.

Ultimately, this has completely stunted the growth of the team and the ability to make that next step. The transition from becoming a rebuilding ball club to a competitive and accountable team. The Kings persona is lingering in a purgatory of listlessness. Fans, coaches, and the organization don’t know what team effort they are going to get on a consistent basis and it has lead to an immense frustration seen within the organization.

Following tonight’s 98-94 loss to the Portland Trail Blazers, the two players that the Sacramento Kings have been lobbying for as All-Stars were no where to be found. Both Rajon Rondo and DeMarcus Cousins disappeared out the back door and were unavailable to comment on their less than stellar performances. Even George Karl was visibly flustered by the lack of commitment and growth this team has shown. Cutting his press conference short, Karl left in frustration:

George Karl was not happy after the game… pic.twitter.com/ILQvQZLueq

The bottom line is this, Sacramento hasn’t found out what it means to be a successful team. They have hindered their development entirely, time and time again by ruining any opportunity that has been present for them to seize. The team refuses to learn from its previous faults. No player has stepped up to lead this team to where it needs to be. From the actions of the organization tonight, quite frankly no person wants anything to do with this role.

Starting from the tip-off, Sacramento fell behind immediately. C.J. McCollum burst out with eight quick points putting the Blazers up 11-3. The Kings had five turnovers in the first half, attempting to “throw like Aaron Rodgers, in the window passes from 30 feet,” in the eyes of George Karl. “We got to value possessions. I don’t think we’re a talented enough basketball team not to put more value on every possession we play at both ends of the floor.”

The Kings retaliated by putting DeMarcus Cousins on the block and attacking the significantly smaller bigs of Portland. Cousins was able to draw six fouls by attacking the paint, which led to ten points from the charity stripe.

Sacramento was able to regain a stronghold on the game by taking a one-point lead over Portland heading into the second quarter. Unable to take advantage of a poor shooting night from the Blazers, the game remained incredibly close for the duration.

Outside of the main scorer in Cousins, there was no support from the reserves on the bench. Rudy Gay was especially awful, shooting 2-12 from the floor for just seven points. Only three players on the Kings scored in double digits as the Kings were held below 40 percent from the field.

For Rip City, it was McCollum that lead the way with 35 points, 11 rebounds, and 9 assists. Rip City is now 2-2 without Damian Lillard, with an impressive home win over the Cavaliers and the victory tonight. Meyers Leonard had a big game for the Blazers as well, shooting 4-7 from downtown and scoring 16 points.

The narrative of the third quarter remained consistent, yet the game was within one point to start the fourth quarter. Both teams combined for 14 points in the first eight minutes of the fourth quarter and neither were able to take advantage of the lack of offensive production. Unable to stop Portland’s point guard, McCollum went on to score six of the Blazers final eight points.

The Kings problems are evident. They continue to make the same mistakes and have yet to deliver any significant changes. Tonight was a chance for the organization to make a large stride into the playoff picture, yet the Kings found a chance to blow it to a Damian Lillard-less Portland Trail Blazers. The inability to defend, the lack of offensive consistency late in the game and the blatant disregard of respect for opponents are very real. These flaws are having an effect on every person in the organization, as seen tonight.

Sacramento heads on the road for a back-to-back against the Golden State Warriors. Hoping to upset the reigning champions, the Kings need to vastly improve on their lack of perimeter defense in order to have a chance with their upset bid. As it stands now, the Kings are now a game out of the eighth seed and competing against the Utah Jazz.