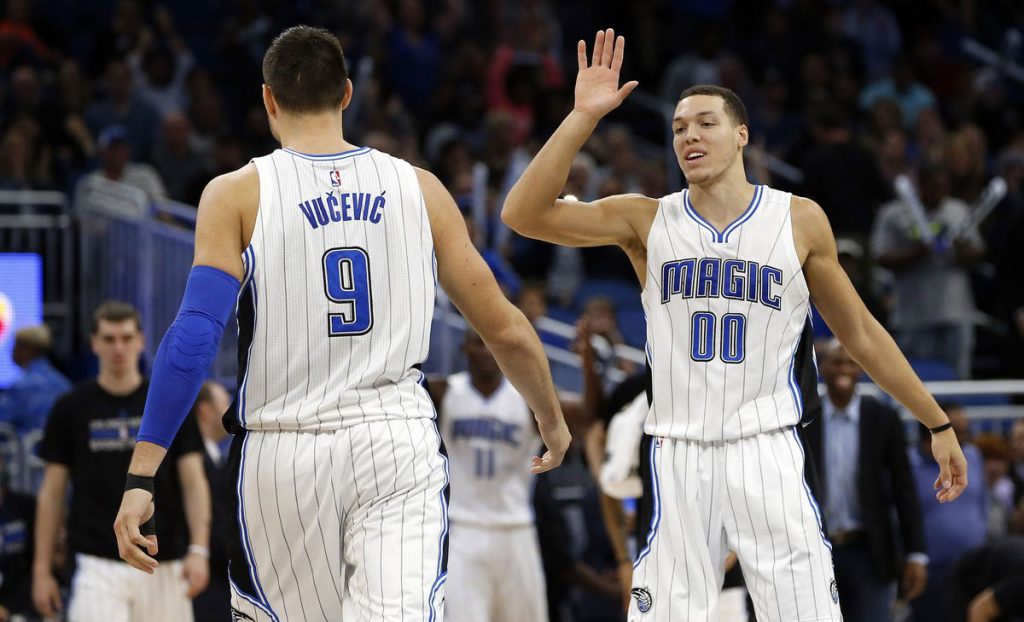 The NBA trade deadline is always a harried and hurried day as teams attempt to get better in anticipation of the upcoming NBA playoffs or to go the longer view route, acquiring young players that may be projects or just need a change of scenery, or draft capital. Rumors have been flying around for weeks about this NBA player or that NBA player, and while some speculation came to fruition, others proved to be unsubstantiated guesses.

The Eastern Conference didn’t have much of a swing of power as the West did as Kyle Lowry, arguably the top trade target, didn’t change teams as expected. Regardless, it was still an interesting trade deadline. Below are the grades for each team involved in a transaction on the last day of trading. Note that grades are relative to the specific deal and not relative to all the deals that went down. Current personnel, level of player expected/needed for the team, and fit are also considered in the grading.

ATLANTA HAWKS
Acquired: Lou Williams, two future second-round picks from Los Angeles Clippers
Sent: Rajon Rondo to Los Angeles Clippers
The Hawks made out like bandits in this trade. Not only do they get rid of Rondo’s guaranteed contract for next season, they also get back Lou Will’s expiring, which allows them to have more money to re-sign the non-traded John Collins this summer. Even better, the Hawks actually got two second-round picks back on top of that. That’s like getting two extra desserts after dinner for free!
Grade: A

BOSTON CELTICS
Acquired: Evan Fournier from Orlando Magic; Mo Wagner, Luke Kornet from Chicago Bulls
Sent: Jeff Teague, two second-round picks to Orlando Magic; Daniel Theis, Javonte Green, cash to Chicago Bulls
It was obvious that the Celtics needed to do something as our Alex Mullin wrote about. Unfortunately for him and other Celtics fans, the team wasn’t able to make that big impact move, such as trading for Aaron Gordon. However, Fournier is a nice perimeter threat addition that should help move the Celtics forward; but, how much forward? At least the cost was minimal since Boston didn’t give up a first-round pick for a legitimate shooter. Teague fell back in the depth chart due to Marcus Smart‘s return, so losing him shouldn’t hurt too much. Moving Theis could hurt the team, however, since he was one of those energy guys that just did what needed to be done. Adding Wagner and Kornet are “eh” kind of moves.
Grade: B-

CHARLOTTE HORNETS
Acquired: Brad Wanamaker from Golden State Warriors
Sent: Cash to Golden State Warriors
Wanamaker should play the classic 3-and-D role for the Hornets from the guard position, essentially joining the rotation of Devonte’ Graham and Terry Rozier, a spot no longer filled by the injured LaMelo Ball. Now, to be clear, Wanamaker is not Ball; he’s a solid add to the guard group that won’t have to focus on playmaking because of the aforementioned players and Gordon Hayward. Wanamaker only needs to play D and knock down triples, which he was more than capable of doing his first two years with the Boston Celtics. He should get more burn with the Hornets, and subsequently (hopefully for the Hornets), get more results.
Grade: B+

CHICAGO BULLS
Acquired: Troy Brown, Jr., Mo Wagner, cash from Washington Wizards (traded to Boston Celtics); Nikola Vucevic, Al-Farouq Aminu from Orlando Magic; Daniel Theis, cash from Boston Celtics
Sent: Daniel Gafford, Chandler Hutchinson to Washington Wizards; Wendell Carter Jr., Otto Porter, two first-round picks (2021, 2023) to Orlando Magic; Mo Wagner to Boston Celtics
It’s really hard to not like what the Bulls did here. Sure they gave up a young talent still full of potential in Carter Jr., but they never found a good spot for him with the emergence of Thaddeus Young as a playmaking forward and the return of Lauri Markkanen. The same can be said of Porter. Adding another NBA All-Star in Vucevic to pair with Zach LaVine should definitely give the team a significant playoff push where they are currently on the outskirts. I particularly like the smaller additions of Theis, who will add to the big man depth and be a glue guy sort of player, and Brown Jr., who will give them a guard that can play defense and should be able to play in space with the bigs being outside threats. Bulls fan should be happy post deadline.
Grade: A

CLEVELAND CAVALIERS
Acquired: Isaiah Hartenstein, two second-round picks (protected 2023, unprotected 2027) from Denver Nuggets
Sent: JaVale McGee to Denver Nuggets
One of the nicer moves on the lower end of the spectrum. The Cavs gave up a second-round pick to the Los Angeles Lakers for McGee and get two second-round picks back. Do the math, and that’s just good dealing by the Cavs. Hartenstein has a small player option next season ($1.8 million) and can use the rest of this season as an audition to be Jarrett Allen‘s backup in 2021-22.
Grade: A

DETROIT PISTONS
Acquired: Cory Joseph, 2021 second-round pick (via LAL) and 2024 second-round pick from Sacramento Kings
Sent: Delon Wright to Sacramento Kings
This was most likely a economic move as Wright was signed for next season at $8.5 million, while Joseph can be bought out with his $2.4 million guarantee. Otherwise, the Pistons will pay him his $12.6 million contract, which I don’t see as Killian Hayes, the injured rookie, is the point guard of the future for the team. Getting two second-round picks as well is gravy.
Grade: B+

MIAMI HEAT
Acquired: Nemanja Bjelica from Sacramento Kings; Victor Oladipo from Houston Rockets
Sent: Moe Harkless, Chris Silva to Sacramento Kings; Avery Bradley, Kelly Olynyk, 2022 pick first-round swap rights to Houston Rockets
I’m not sure which move I like more – getting a power forward that can shoot the three and pass or a former All-NBA player? Bjelica sort of got shafted in Sactown as they needed to play Marvin Bagley III to make up for losing out on better players who shall not be named in his draft class. He can hit from long range (career 38.8 3PT%) and can even pass. In the Heat’s zone defense, he should do well since he’s not a great individual defender. Adding Oladipo, whom just about everyone knew wanted to go to Miami and would have gotten there during the offseason, is a great bet on Pat Riley‘s part. Giving up Olynyk doesn’t hurt with Bjelica as a replacement and Harkless fell out of the rotation. It’s almost certain that Oladipo will bounce back in Miami, where he also trains during the offseason, playing with Jimmy Butler, Bam Adebayo, Goran Dragic, Tyler Herro, Duncan Robinson… wait, the Heat didn’t trade any of those guys to get Oladipo? Riley is a genius!
Grade: A+

NEW YORK KNICKS
Acquired: Terrance Ferguson, second-round pick from Philadelphia 76ers
Sent: Austin Rivers to Oklahoma City Thunder, Iggy Brazdeikis to Philadelphia 76ers
The Knicks will get to kick the tires on a former first-round pick in Ferguson and received a second-round pick in dealing away Rivers who fell out of the rotation with the emergence of rookie, Immanuel Quickley. New York finally got it right in not making a move for the sake of making a move. The Knickerbockers are on the right path.
Grade: B

ORLANDO MAGIC
Acquired: Gary Harris, RJ Hampton, 2025 first-round pick from Denver Nuggets; Jeff Teague, two second-round picks from Boston Celtics; Wendell Carter Jr., Otto Porter, two first-round picks (2021, 2023) from Chicago Bulls
Sent: Aaron Gordon, Gary Clark to Denver Nuggets; Evan Fournier to Boston Celtics; Nikola Vucevic, Al-Farouq Aminu to Chicago Bulls
The Magic totally gutted and remade the team, which for the rest of this season, is a blank page. Markelle Fultz and Jonathan Isaac are the core duo for the team, but also unfortunately, they’re injured. Cole Anthony, who was okay for a rookie starter at point guard is also injured. So, both Harris and Hampton, both young guards, will have an opportunity to try to play themselves into the Magic’s long-term plans. Carter Jr is young and will also get a chance to shine in the Sunshine State. But, thus far, he’s been a disappointment. The change in scenery could be what he needed, however. The draft picks are great for an obviously rebuilding Magic team, but so is the $17 million trade exception from the Fournier trade. I don’t know how bright the future is for Orlando because they seem to always be in rebuild mode since the trade of Dwight Howard, but at least they have some pieces on the board to play with.
Grade: B+

PHILADELPHIA 76ERS
Acquired: George Hill from Oklahoma City Thunder; Ignas Brazdeikis from New York Knicks
Sent: Tony Bradley, two second-round picks (2025, 2026) to Oklahoma City Thunder, Terrance Ferguson, second-round pick to New York Knicks
Hill might not have been the point guard they wanted as that would have been Kyle Lowry from the Toronto Raptors, but Hill is a great fallback option for the Sixers. Hill can facilitate and take away some of those responsibilities from Ben Simmons, and joins a solid perimeter defense with Simmons and Matisse Thybulle, whom the team was able to keep by taking this lower level deal. That’s actually a win to me. Bradley has played well for the injured Joel Embiid, so that hurts a tiny bit, but not significantly.
Grade: B

TORONTO RAPTORS
Acquired: Gary Trent Jr., Rodney Hood from Portland Trail Blazers; 2021 second-round pick (GSW) from Utah Jazz; Future second-round pick from Sacramento Kings
Sent: Norman Powell to Portland Trail Blazers; Matt Thomas to Utah Jazz; Terence Davis to Sacramento Kings
Well, the Raps didn’t pull the trigger on a Lowry trade, and that might have been a good thing for the GROAT (Greatest Raptor Of All Time) as he gets to continue doing his thing in the T-Dot. But, for the team, how does that work out, particularly in the summer when he can leave via free agency? Did they miss out on getting something from potentially nothing? The addition of Trent Jr. is a good one, particularly since trading away Powell, who was having a career season, but just like Powell and Lowry, will be a free agent after the season. Masai Ujiri is one of the better GMs in the NBA, so his cool and patient approach will likely pay off. These trades could open up as much as $20 million this summer, and they did get younger with Trent over Powell.
Grade: B

WASHINGTON WIZARDS
Acquired: Daniel Gafford, Chandler Hutchison from Chicago Bulls
Sent: Troy Brown, Mo Wagner, cash to Chicago Bulls
Gafford should help the Wizards down low as he’s able to block shots at an excellent clip, as well as board if he stays disciplined and doesn’t try to block every shot, which gets him out of position to rebound. Hutchinson might be a downgrade from Brown, as the former is older by a few years and can’t playmake as well as Brown can. The trades don’t really move the needle for a Wizards team just barely in playoff contention in the Eastern Conference.
Grade: C