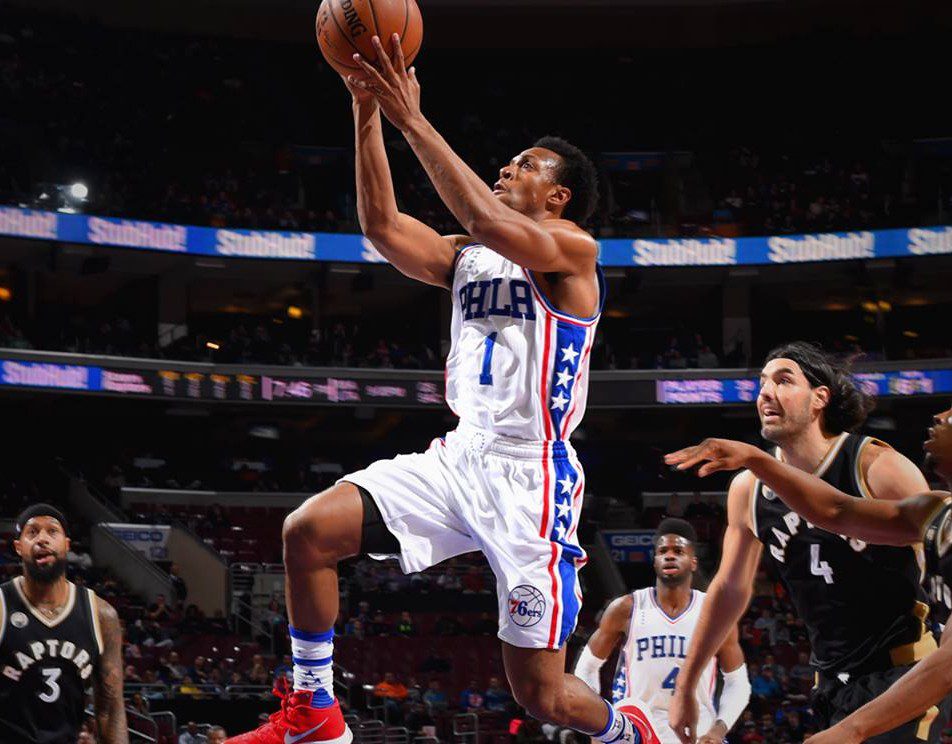 Following their blowout loss to the Atlanta Hawks, the usually upbeat and optimistic Brett Brown was critical of his team, saying they “played with no spirit” and “no fight.” These words didn’t sit well with the Sixers, who on Saturday continued their six-game home stand against the Atlanta Division leading, Drake endorsed Toronto Raptors. Right from the jump, the 76ers were in attack mode. Looking to deliver an early knock out, Jahlil Okafor schooled Toronto’s Jonas Valanciunas for eight points (4-4 FG) in the game’s first four minutes helping the Sixers take a commanding 12-0 lead. The Raptors, though, would use strong first half performances from the high flying Terrance Ross and DeMar DeRozan to rally their way back into the game. With the Sixers ahead by four, midway through the 2nd period, Toronto went on a 23-6 run, holding Philadelphia to one field goal in the final five minutes of the quarter as the Raptors took a 57-44 advantage into the break. Ross, DeRozan and All-Star, Kyle Lowry combined to score 42 (18-FG) of the 57 points for a Raptors team that as a unit, shot 57.9% from the field, 42.9 percent from three and 90.9 percent from the charity stripe in the first half. As the for Sixers, Jahlil Okafor had a strong first half with 16 points on 8-10 shooting, but he didn’t get much help from his teammates who connected on only 10-32 (31.3%) of their shots.

In the opening minutes of the second half, Toronto continued to pour salt on Philly’s wounds, stretching their lead to 17 to the helplessness of the Sixers defense. Looking for an answer, the Sixers found one in Ish Smith who put on a heroic performance that single handedly brought the 76ers back into contention. Smith, who contributed only six points on 3-9 shooting in the first half, drained seven of nine shots and scored 18 points in the 3rd quarter as the Sixers cut the deficit to six heading into the 4th. In the final period, a Carl Landry jump shot brought Philadelphia to within four, but with Smith on the bench, the Raptors were able to extend the lead back to double figures and eventually prevailed 108-95, dropping the Sixers to their third consecutive loss. Ish Smith finished with a career-high 28 points (12-22 FG) in 33 minutes, while Jahlil Okafor and Carl Landry added 19 and 11 respectively.

Slammin’ and Jammin’
Midway through the 2nd quarter, Toronto’s DeMar DeRozan drove past Nik Stauskas and threw down an emphatic one-handed slam over Jahlil Okafor that brought the Wells Fargo Center into a frenzy. DeRozan, who has been on an offensive tear as of late, finished the game with 19 points (7-19 FG) and seven rebounds in 37 minutes. In his last 15 games, he’s averaged 25.3 points per game, tying him with LeBron James for fourth best in the NBA. After the game, Nik Stauskas, a Canada native, complemented DeRozan, calling him a “freak athlete”, while adding that his ability to get to the rim makes him “one of the best players we have in this league.” After the dunk, Okafor was seen holding his left hand on multiple occasions, and although he continued playing, Jahlil was limited to only three points in the second half after exploding for eight in the game’s first four minutes.
https://www.youtube.com/watch?v=4evde37ebmA

Numbers Never Lie?
Take a quick look at the game’s stat sheet and you’ll find some numbers that’ll make you say, “WTF?” The Sixers, who entered the game as the fifth worst three-point shooting team in the league (32.1%), shot a blistering 64.7 percent (11-17) from downtown against the Raptors. Philadelphia had seven different players drill a three pointer, including Carl Landry, who had only connected on three three-pointers during the entirety of his nine year career. Bafflingly enough, despite being red hot from beyond the arc, the Sixers managed to shoot only 42.9 percent (6-14) from the free throw line compared to the Raptors who converted on 77.8 percent (21-27) of their shots from the charity stripe.

Game Notes
• Smith’s 28 points tied Robert Covington for the most points scored by a Sixer this season.
• Smith and T.J. McConnell combined for 12 assists and only one turnover.
• Toronto’s victory was the Raptors 11th consecutive win over the Sixers
• The Raptors rank 7th in the NBA in offensive efficiency, while the Sixers rank last.
• After scoring a combined 43 points on 20-29 FG in his first two meetings against the Sixers, Toronto’s Luis Scola was held to only two points on 1-5 shooting in 18 minutes.