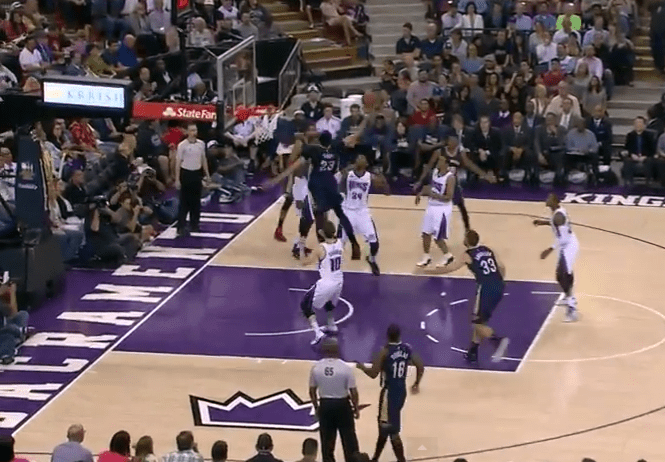 The Sacramento Kings seem to be the only team that continually thwarts their own playoff ambitions.

The team has seen more than their own fair share of highs and lows this season. Against Houston, Sacramento totaled 35 assists to 13 turnovers. While in contrast, against Charlotte, Sacramento blew a 22-point lead and lost in overtime.

The Kings can’t seem to find a happy medium. Not only is their play inconsistent, but so are their effort levels. Sacramento has repeatedly come out flat and with no sense of urgency in games that seem to matter the most.

Just two games out of playoff contention, Sacramento had another chance to narrow the gap against a much weaker New Orleans team. Of course, Sacramento faltered in the face of opportunity and allowed two 31-point quarters to one of the worst offensive teams in the league.

Sacramento held a lead over the Pelicans for just three minutes throughout the duration of the game. New Orleans pulled ahead early and eventually saw their lead grow to as much as 25.

In the first quarter, it was Eric Gordon and Anthony Davis who combined for 19 of New Orleans’ 29 points. Gordon and Davis both went on to finish the night with 24.

The Kings came out to another slow start and were limited to just 19 first-quarter points. DeMarcus Cousins, who made his first All-Star appearance in 2015 and is well on his way to another, struggled from the field early as he tried to rally his team to keep the game competitive.

“[Effort] has been our problem all year. We’re all talk right now-not back up what we’re preaching, so we look foolish,” a frustrated Cousins said after the game.

A much different side to DeMarcus, who self-proclaimed his teams solidified 2016 playoff position, just last week.

Cousins did everything in his power to back up his assertion. The big man finished the night with 32 points and 12 rebounds. With 8:32 left in the game and the Kings down by 27, Cousins himself went on a 14-4 run and tried to muster a heroic comeback for Sacramento.

The supporting cast for Boogie was no help at all. The Kings were held to 26 percent from three-pointers and during Cousins’ run, and the other four players on the court at that time combined for just 13 points the entire game. DeMarcus did it all as he scored from nearly ever location on the court.

Cousins’ miraculous scoring output was too late of a comeback rally for the Kings. With 2:38 left to play in the fourth quarter, the Kings were down by 16 and forfeited the game after a late Ryan Anderson deep three.

Sacramento gave up a very winnable game and were unable to execute under pressure.

“I’ve said it before, I can’t control what’s going on with other teams. All we can control is the effort we put out on the floor and what goes on in this locker room. If we’re winning games, it doesn’t really matter who’s losing,” Cousins finished.

The Kings take on the Jazz on Thursday night in Utah and have one more golden opportunity to creep closer to the eighth seed as Utah lost tonight in Portland.

For the Pelicans, they host the Hornets on Friday in an attempt to string together back-to-back wins.