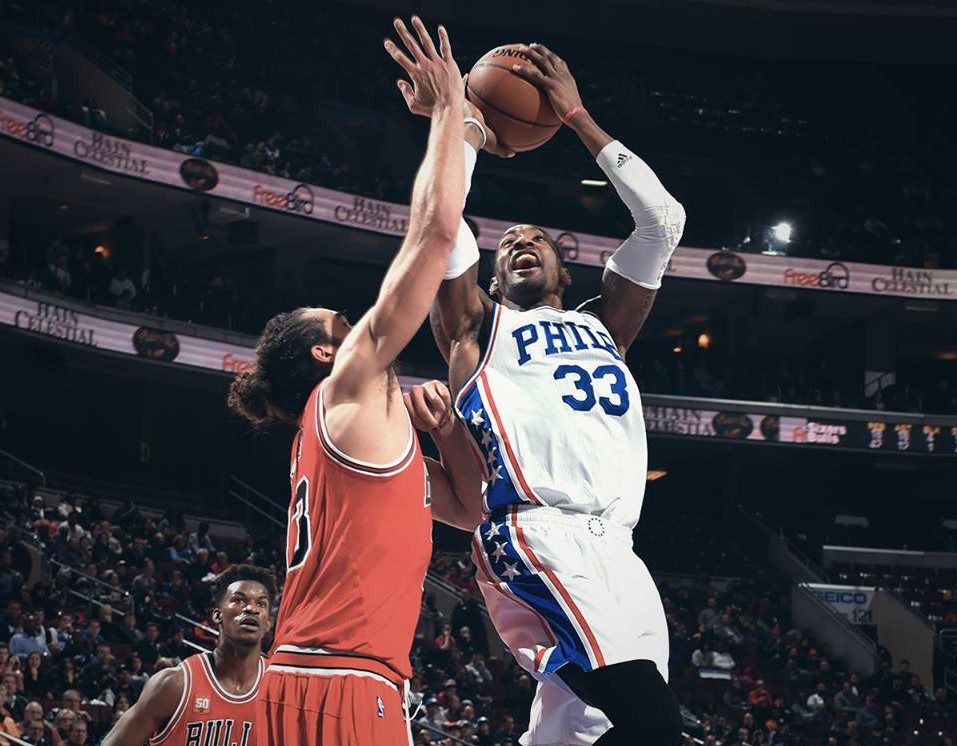 They don’t call him “Jimmy Buckets” for nothing.

After the 76ers had built up, what looked to be, an insurmountable first half lead, Jimmy Butler spearheaded an unbelievable comeback to help the Chicago Bulls pull off a shocking 115-111 overtime victory Thursday night. In the process, Butler, the NBA’s tenth leading scorer, poured in a career-high 53 points (15-30 FG, 21-25 FT), joining Michael Jordan as the only player in the last 30 seasons with at least 50 points, 10 rebounds, five assists and three steals in a road game.. For the Sixers, their disappointing late game play overshadowed what was a nearly flawless first half performance. Philadelphia led by 12 after the 1st quarter and would later use a 16-2 run in the 2nd to take a 24 point advantage with about five minutes left in the period. The Bulls, behind Butler’s 25 first half points, would nearly slice the deficit in half, until a buzzer beating jumper by Ish Smith helped the Sixers take a 62-46 lead into the break. Jahlil Okafor led the way with 12 for the Sixers who shot 54.5% (22-44 FG) from the field in the opening half compared to the Bulls who connected on only 38.5% (15-39 FG) of their shots. Philadelphia also got a huge lift from their second unit, which outscored Chicago’s reserve’s 27-4.

The Sixers would continue their strong play into the opening minutes of the second half. Fueled by their defense, Philadelphia held Chicago to without a field goal for the first three minutes of the 3rd as they stretched their lead back to 20. The Bulls, though, would quickly catch fire, and went on a 20-5 run that cut the Sixers lead to five. After trading baskets, Butler would put the finishing touches on the 3rd quarter, drilling a three-pointer in the final seconds of the period to bring the Bulls to within two (79-77) entering the final 12 minutes of play. Philadelphia was outscored 31-17 in that devastating 3rd period, credited by Chicago’s defense, which held the Sixers to 25% (5-20 FG) shooting. In the 4th quarter, Robert Covington, who had only scored in double figures once over his last 13 games, knocked down four huge three-pointers that helped the Sixers stretch their lead back to 10. But, just when the Sixers thought they had seized control, Doug McDermott and Jimmy Butler scored 27 straight points for the Bulls, helping them take their first lead since early in the 1st quarter. With the Sixers down three with only seconds remaining, Ish Smith drilled a clutch three to tie the score at 104 and force the game into overtime.

In OT, the Sixers would take an early four point lead, but it wasn’t enough, as Chicago ran off nine straight points (E-Twaun Moore scored seven), which put the Bulls up by five and sealed the game the game for good. Despite the outcome, Sixers coach, Brett Brown, was complimentary of his team’s performance, saying “they played their hearts out.” The defeat was Philadelphia’s fourth consecutive loss, dropping them to 4-37 at the midway point of the season.

The Return of Robert Covington
Although Jimmy Butler’s career-night will garner 99.99% of the attention, Robert Covington had a little scoring outburst of his own, pouring in a team-high 25 points (8-16 FG) on six made three pointers in 30 minutes before fouling out late in the 4th. Covington, who had scored only 23 points in his last five games, has admittedly struggled as of late, which at times has forced Brett Brown to take him out of the rotation. “I’ve never had a slump like this,” Covington said. “But everybody isn’t going to make every shot they take. It’s just a matter of working through it and overcoming. I’ve been through a lot, but I’ve never been through anything like this. But knowing the person I am, I’ll come out of it and get back to the player I am.”

Hustle Plays
Following their loss to the Cleveland Cavaliers Sunday night, Brett Brown told reporters that he was most concerned with his team’s inability to rebound the basketball. Second chance points, he said, are the reason why his team has not been able to win close games. Well, history has a tendency to repeat itself, and again on Thursday, the Sixers were destroyed on the glass 53-34 by the lengthy, athletic and active Bulls front line that was playing without their leading rebounder Pau Gasol. Joakim Noah collected a game-high 16 boards, Taj Gibson hauled down 11 and Jimmy Butler added 10 more for Chicago who leads the NBA in rebounds per game (49.1).

Game Notes
• Chicago’s win was their 9th consecutive victory over the Sixers.
• The Sixers 62 first half points is their highest total of the season.
• Jahlil Okafor, who connected on his first five shot attempts, went scoreless in the second half and finished the game with 12 points (5-11 FG) and four rebounds.
• The Sixers turned the ball over 11 times, compared to the Bulls who had 23.
• Butler also became the first Chicago Bull to make twenty free-throws in a game since Michael Jordan in 1998 and the first to eclipse 50 points since Jamal Crawford in 2004.
• Nikola Mitotic was held to 0-8 shooting in the first half. He finished with seven points (2-13 FG) and five turnovers in 23 minutes.
• Nik Stauskas suffered a left shoulder contusion in the 4th quarter and would not return. He finished the game with 12 points (3-5 from three) and five assists in 39 minutes.
• DNP’s: Derrick Rose – Left Knee Patellar Tendonitis, Pau Gasol – Shoulder, Achilles Soreness, Jerami Grant – Left Calf Strain