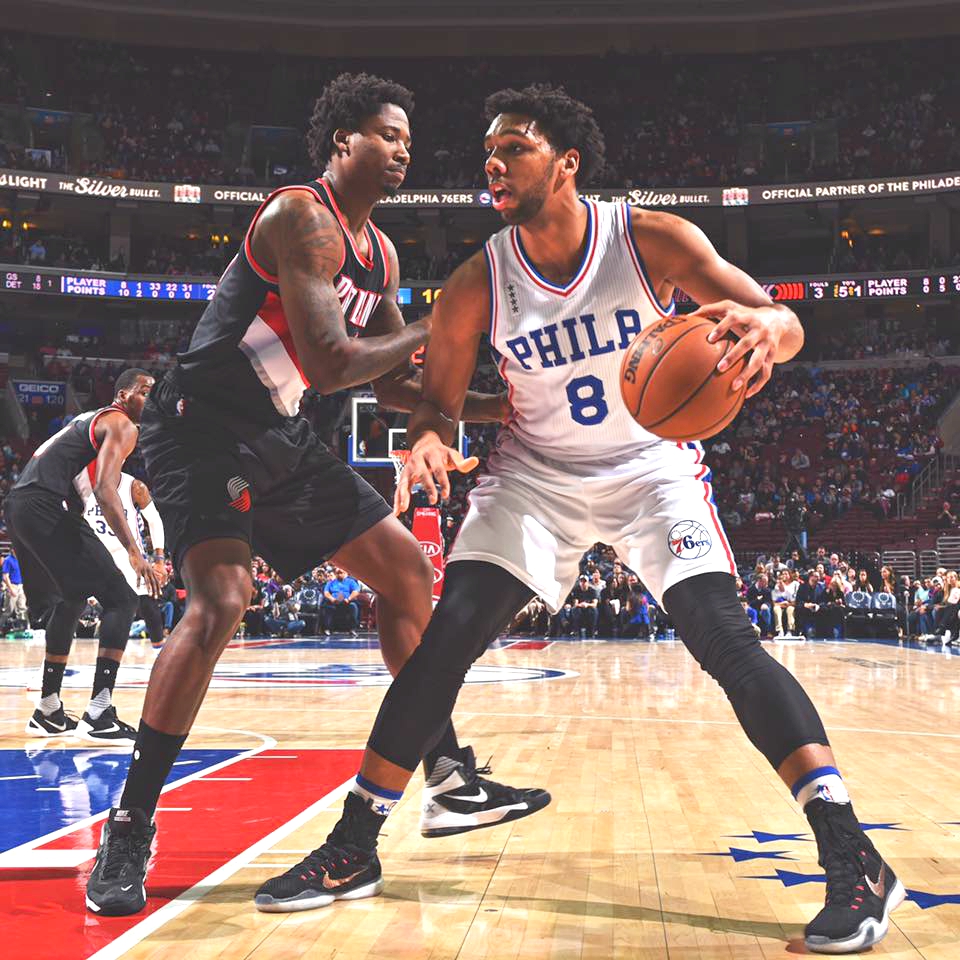 Following their overtime loss to the Chicago Bulls, Brett Brown said that one of his team’s greatest strength is their ability to forget. This is the NBA he said. There’s no time to sulk in defeat or harp on little mistakes; it’s on to the next one. So when his Philadelphia 76ers took the court against the Portland Trail Blazers on Saturday night, they weren’t thinking about the 24-point lead they had blown the night before nor were they thinking about Jimmy Butler. Their mindset was simple: lock down on defense and leave tonight with a W.

And that’s exactly what they did.

Against the Blazers, the Sixers again came out swinging, only this time, they didn’t let up. Looking the deliver an early knockout blow, Jahlil Okafor connected on his first seven shots, helping Philadelphia take a 12 point lead at the end of the 1st. Okafor, who went scoreless in the second half against the Chicago Bulls, scored 17 points in the opening period, matching Portland’s total 1st quarter scoring output. In the 2nd, the Sixers continued to add salt to Portland’s wounds. Led by strong perimeter play from Isaiah Cannan, Ish Smith and Robert Covington, the 76ers scored 39 points on a scorching 14-23 (60.9%) shooting as they took a commanding 25 point lead (68-43) into halftime. Cannan and Smith combined for 17 points in the 2nd, while Covington, coming off of a 25 point performance against the Bulls, drilled three three-pointers for 11 points. In the second half, the Sixers kept their foot in the gas pedal stretching the lead to as many as 31 as they cruised to a 114-89 victory, snapping Portland’s three-game winning streak and improving to 5-37 on the season.

Sharing the Wealth
Okafor led the way with 25 points (12-16 FG) in 29 minutes and spearheaded a well balanced scoring attack for the Sixers who had five players score 14 or more points. Philadelphia’s backcourt tandem, Ish Smith and Isaiah Cannan contributed 16 and 14 points respectively. Combined with T.J. McConnell, the three Sixers point guards dished out a combined 16 assists and only committed two turnovers the entire game. Bench play was also a huge factor. The always energetic, Richaun Holmes scored 18 and grabbed six rebounds, while Robert Covgington added 16 in 25 minutes. Covington, who has bounced back nicely following a recent shooting slump that forced him out of the rotation, attributed his recent strong play to the Sixers coaching staffing saying, “These past two games have been a huge confidence booster. Coach Billy [Lange] and Coach Lloyd [Pierce] have been working with me the past few weeks, watching film, focusing on the small things to readjust my shot and getting back to the things I was doing before.”

Lockdown Defense
The Trail Blazers rank fourth in the NBA in made three-pointer per game (10.2) and sixth in percentage (36.2%), but you would have never guessed it by watching them play Saturday night. From start to finish, the Sixers put the clamps on Portland, forcing them out of the paint and into taking contested jump shots, Philadelphia deserves a lot of credit for the job they did on the defensive end of the floor. The Blazers, who rank fourth in the NBA in three-pointers per game (10.2) and sixth in three-point percentage (36.2%), shot a dismal 17.2% (5-29) from distance and an overall 39.1% (34-87 FG) from the field. All-Star, Damian Lillard and the high scoring C.J. McCollum were held to a combined 27 points on 10-36 shooting and scored only three points in the 3rd quarter as the Blazers tried to cut into the Sixers lead. After the game, Brett Brown was complimentary of his team’s defensive effort, saying that their grit and physicality “set the table for everything” and “showed that we’re going in the direction we want to go and have been going.”

Old Faces, New Places
Former Sixers guard, Tim Frazier, made an appearance for the Blazers on Saturday night, scoring three points and dishing out five assists in 12 minutes against the team he began his NBA career with. Last season, Frazier, the 2015 D-League MVP signed two 10-day contracts with the Sixers after a strong season with the Maine Red Claws. In his NBA debut against the Boston Celtics, the speedy guard out of Penn State registered a game-high 11 assists and averaged 7.2 assists in six games before behind released.