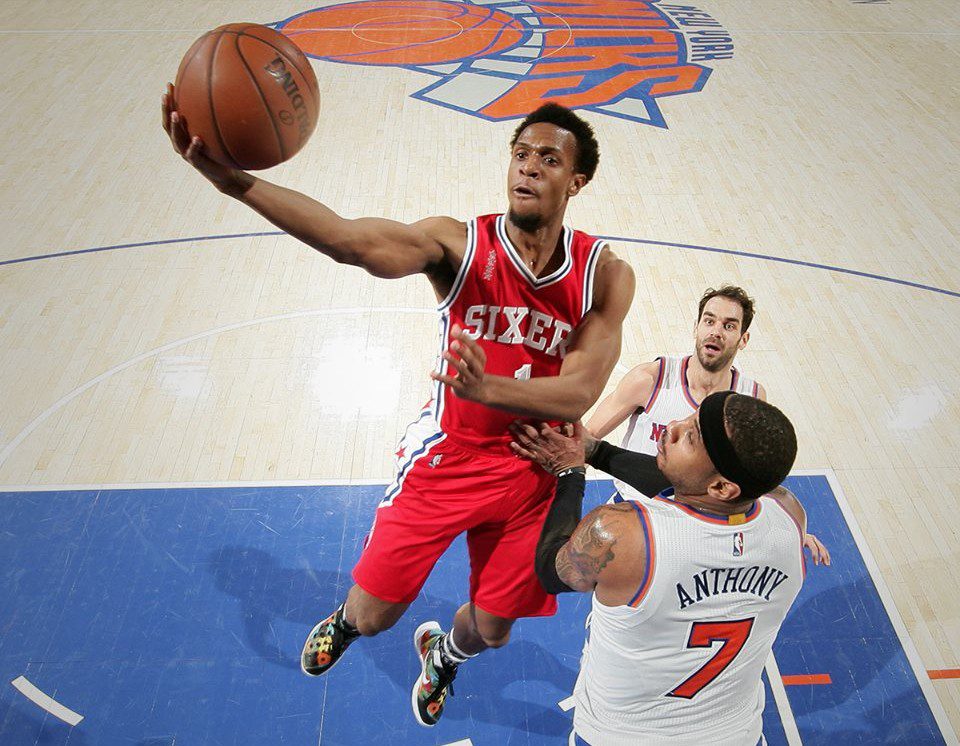 On a day dedicated to fight and perseverance, it was fitting that the Philadelphia 76ers and the New York Knicks faced off in what was one of the most exhilarating, gritty and heart wrenching games of the NBA season.

The Sixers, who have held 20 point leads in their previous two games, found themselves down by 18 points late in the 3rd quarter as the Knicks looked ready to runaway with the victory. Philadelphia, however, wouldn’t go away quietly. Sparked by strong shooting performances from Isaiah Canaan and Ish Smith, the Sixers proceeded to go on a dominant 32-12 run that put them up by two with 3:30 left in game. After the Knicks scored on their next two possessions, Hollis Thompson, a career 70.8 percent foul shooter, was fouled on a three-point attempt, but unimaginably, missed all three free throws that would have given the Sixers the lead with a little over a minute left in regulation. Thompson, though, would redeem himself on the next possession by drilling a clutch three-pointer, followed by an Ish Smith jumper that put the Sixers up by three with only 13.6 seconds remaining. Needing to make one final stop to secure the victory, Carmelo Anthony launched a three-pointer from the top of the key that swished through the bottom of the net over the outstretched arms of Nerlens Noel to force the game into overtime.

In OT, a pair of Ish Smith layups put the Sixers up by four, but the Knicks responded with an 11-4 run that gave New York a three-point lead with only 20.2 seconds remaining. During this stretch, the Knicks went 7-7 from the free throw line. Even Lou Amundson, a seldom use reserve and 44.1 percent career free throw shooter, converted on both of his attempts. After a Brett Brown timeout, Robert Covington banked in a desperation three-pointer over Lance Thomas to tie the score at 107 and extend the game into a second overtime where they would eventually fall 119-113. Jahlil Oakfor, who did not play in the 4th quarter or either overtimes, led Philadelphia with 20 points (10-17 FG) , followed by his frontcourt partner, Nerlens Noel who filled the stat sheet with 18 points (8-14 FG), 13 rebounds and three blocks in 47 minutes of action. On the Knicks side, Arron Afflalo poured in a game-high 25 points, Carmelo Anthony scored 19, while Kristap Porzingis and Robin Lopez each contributed 16 apiece.

The Floor General
Ish Smith’s ability to penetrate the defense and create shots for his teammates was the decisive factor that had the Sixers within seconds of pulling of the victory. In 44 minutes, Smith scored 16 points, dished out a career-high 16 assists and hauled down seven rebounds. The only red flag on his stat sheet was that, despite putting up monstrous numbers in the assist column, up until the 4th quarter, Smith himself could not get into any type of offensive rhythm. After connecting on his first shot of the game, he missed his next 10 field goals and finished only 8-28 (28.6%) from the field.

Jahlil Okafor
To begin the game, Okafor looked brilliant. He scored 12 of his team’s first 19 points and by the end of the 3rd quarter, was the only Sixers play to score in double figures. Yet, despite all of this, Brett Brown elected to sit Okafor for the final 22 minutes of the play (4th quarter & both overtimes) as the Sixers chipped away at the Knicks lead. After the game, Brown credit Okafor’s attitude, calling him an “amazing teammate” and justified not playing him because “that group [on the floor] was rolling and I didn’t see any fatigue, so we rode them out.” On the other side of the floor, Jahlil’s rookie rival, Kristap Porzingis, had himself a heck of a game, scoring 16 points (7-11 FG), grabbing 12 rebounds and blocking three shots before being hobbling to the sidelines with a foot injury late in the 4th quarter. Porzingis would not return, but assured Knicks fans that he would be fine. “It’s sore”, he said. “One spot is bothering me at the moment. I’m sure I’ll be fine.”

Containing Carmelo
Around the league, Robert Covington is known as much of a defender, but take a quick look at Carmelo Anthony’s stat sheet and you’ll begin to think otherwise. Aside from knocking down the late three-pointer that sent the game into overtime, Anthony, for the most part, had a night he’d much rather forget. In nearly 50 minutes, “Melo” scored 19 points, but shot a dismal 7-28 (25%) from the field and only connected on three of his seven free-throw attempts.

Game Notes
• DNP – Nik Stauskas (left shoulder contusion)
• Nerlens Noel scored 10 of his 18 points in the 4th quarter.
• The Sixers missed eight 4th-quarter free-throws and shot 13-25 (52%) overall from the line.
• The Sixers only committed 13 turnovers, well below their season average. They had five at halftime, but turned the ball over seven times in the 3rd quarter as the lead ballooned to 18.
• The Knicks rank last in the NBA in forced turnovers per game (11.2).
• Jerami Grant returned to the lineup after missing the last two games with a left calf strain. In 15 minutes, Grant scored nine points and picked up five fouls.
• Derrick Williams, who has averaged 19.7 and 7.0 rebounds in his last 3 games, had a quiet night off the bench scoring only seven points in 15 minutes.
• The Sixers will fly to Orlando to take on the Magic on Wednesday at 7:00 PM.