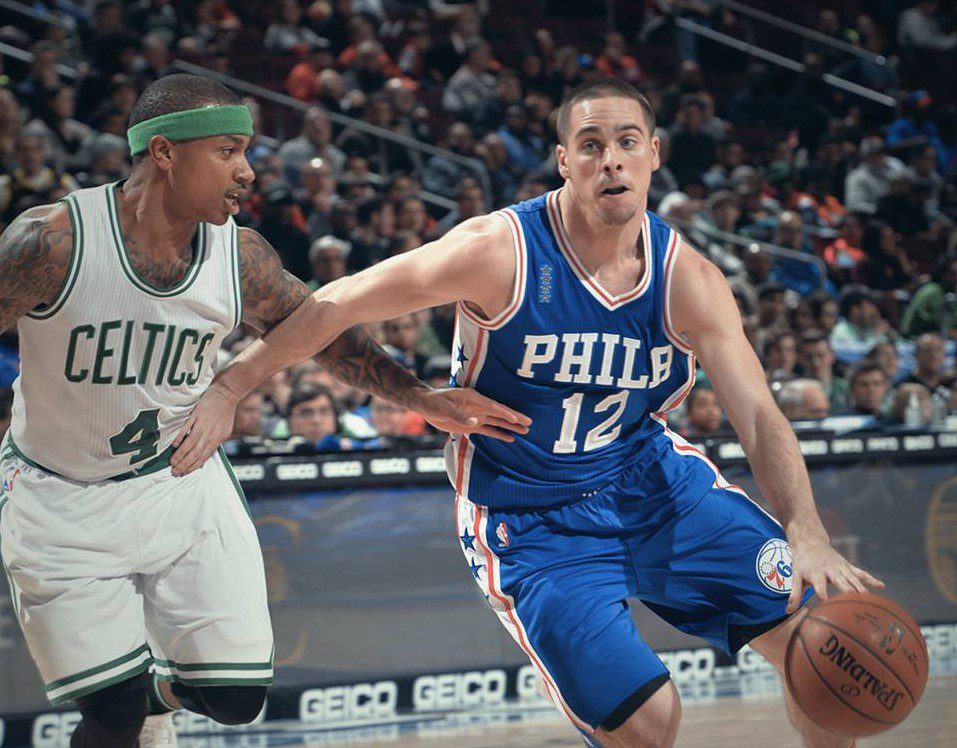 Taking the court a day late due to a massive snow storm that swept through the East coast, the Philadelphia 76ers looked unrecognizable as they were walloped by the Boston Celtics on Sunday night. From the get go, the Sixers, coming off of their victory to the Orlando Magic, looked, according to Jahlil Oakfor, “flat” and “unenergetic.” Led by hot shooting performances from Jae Crowder and Marcus Smart, the Celtics, who rank 7th in the NBA with 103.8 points per game, went on a 13-0 run in the 1st quarter followed by a 21-8 stretch in the 2nd , which helped give Boston a 58-43 halftime lead. Crowder and Smart both scored 14 points apiece for the Celtics. Smart, who has struggled with his shooting consistency all season (34.4% FG, 21.5% 3PT), drilled all three of his attempts from beyond the arc after shooting an abysmal 13% (3-23) from distance over his last six games. On Philadelphia’s side, Robert Covington was the lead man with 17 points (5-6 from three), but was the only Sixer in double figures at the break. Jahlil Okafor, who averaged 22.5 points in Philly’s first two meetings against the Celtics, struggled against the physicality and strength of Boston’s Jared Sullinger and was limited to just two points (1-4 FG) in 18 minutes.

In the second half, things wouldn’t get any better for the Sixers. Trailing by 15 at the break, Isaiah Thomas scored 13 points in the 3rd, leading the Celtics on a 22-8 run that helped Boston balloon their lead to 29. The Sixers, who have struggled with ball security issues throughout the season, committed nine turnovers in the period, stunting any chance they had at a comeback. When the final buzzer rang, in convincing fashion, the Celtics walked out of the Wells Fargo Center with a 112-92 victory, giving them a 3-0 advantage in the season series. The win, Boston’s 24th of the season, was their sixth consecutive game over 109 points. As for the Sixers, another blowout loss to a subpar Eastern Conference opponent baffled head coach Brett Brown who, after the game, criticized his team for their lackluster effort. “I don’t even know what team I coached tonight. That’s not who we are,” Brown said. “We were poor. I don’t know why. Maybe it had something to do with the snowstorm. I doubt it. We just didn’t come with the energy for whatever reason.”

Three Point Shooting
Just two weeks ago, Robert Covington found himself in the middle of a massive shooting slump and out of the Sixers rotation. Now, the third year forward out of Tennessee State is playing some of the best basketball of his young career. Averaging 17.0 points (44.7% from three) and 6.8 rebounds over his last five games, Covington showed out with another strong performance; scoring a game high 25 points (6-15 FG) to along with eight rebounds in 34 minutes. “RoCo”, as his teammates call him, connected on his first five three-pointers, although, he eventually cooled off, going 1-8 the rest of the game.

On the other end of the floor, the Celtics, who rank 7th in the NBA in three-point attempts per game (27.2), went on a hot streak of their own from beyond the arc. Due in large part to Isaiah Thomas’ ability to penetrate into the paint and draw defenders away from the perimeter, Boston’s wing players connected on eight of their first 11 three pointers, eventually, finishing 11-25 (44.0%). Jae Crowder was responsible for four of those three pointers, followed by Avery Bradley and Marcus Smart who each had three apiece. After the game, Nerlens Noel addressed the Sixers inability to close out on shooters, saying, “They can shoot. They shot way too many open jump shots, uncontested the whole game especially in the first half. They hit some tough shots, but it’s on us to really make them earn what they’re getting.”

Ball Movement
Turnovers, once again, proved to be the Sixers Achilles heel. Credited to the physicality of the Celtics defense, the Sixers committed 23 turnovers including nine in the 3rd as Boston’s lead grew to 29. Philadelphia’s point guard trio of Ish Smith, T.J. McConnell and Isaiah Canaan were responsible for 11 of these turnovers and only seven combined assists. Canaan led the Sixers with five, despite only playing 15 minutes. Smith committed three and tied his second lowest assist output (4) since rejoining the Sixers on December 26th. McConnell also committed three, and uncharacteristically so, considering the fact that over his last three games he had assisted on 18 baskets with only one turnover in a combined 47 minutes. Despite this, Brett Brown was complimentary of McConnell’s effort, saying “T.J. is the only one that really played well or with the spirit that we talked about and have delivered on as of late.”

Nik Stauskas Returns
After missing three games with a left shoulder contusion, Stauskas, the second year sharpshooter out of Michigan, struggled in his return, scoring just two points (1-6 FG) off the bench for the Sixers. In his 15 minutes of action, Stauskas missed all four of his three-point attempts, one of which, hit the side of the backboard, while another airballed completely. In eight games this month, “Sauce Castillo” is shooting 42.9% from downtown, a big improvement from the 28.1% he shot in 30 games during November and December.

Game Notes
• Robert Covington’s six three-pointers tied a career high.
• Jahlil Okafor finished with 10 points (5-10 FG) and six rebounds in 30 minutes.
• Celtics center, Jared Sullinger, registered a game high seven assists. Boston, the fourth highest assisting team in the league (24.2), had 29 on 43 made field goals.
• Former Sixer, Evan Turner, scored 11 points (4-9 FG) and grabbed four rebounds in 26 minutes off the bench. Turner, who spent three and a half years in Philadelphia after being drafted second overall in 2010, was booed every time he touched the ball.
• The Sixers will remain at home to take on the Phoenix Suns on Tuesday at 7:00 PM.