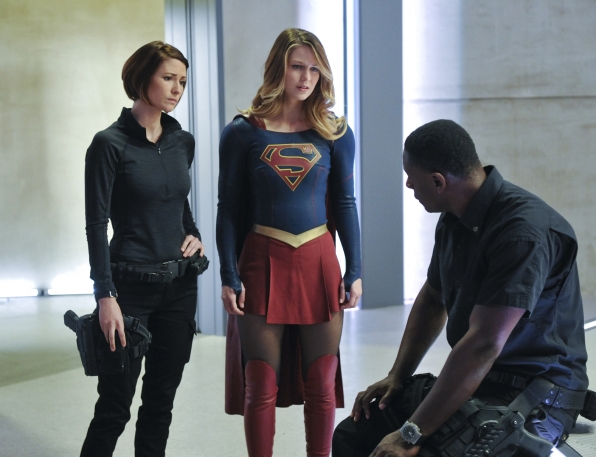 It was ask and you shall receive this week on Supergirl. After having introduced us to J’onn J’onzz weeks ago, only to have the writers barely utilize the character, we finally got an episode primarily dedicated to the Martian Manhunter, and it was definitely worth the wait.

Supergirl deals with some heavy stuff from time to time, but none of that compares to Monday night’s episode. We finally get a look into J’onn J’onzz’s past, which is unsurprisingly mirrored by that of Kara. J’onn, like Kara, deals with survivor’s guilt after being the only one in his family, and perhaps his race, to survive a Holocaust-like concentration camp. However, unlike Kara, J’onn faces this guilt with suicidal recklessness when he comes face-to-face with one of his planet’s attackers. We finally got this week to really connect to J’onn J’onzz, and actually feel real emotions for his character other than “holy shit, he’s so awesome.”

Not only was it great to finally get some insight into an otherwise murky character, but J’onn’s long awaited storyline also gave us some of the best fight scenes on Supergirl. One of my least favorite things about monster-of-the-week style shows is that each week’s particular battle usually gets relegated to the final few minutes of the episode. This usually means that the battle is rushed and quickly resolved despite an hour of build up. And while all of this was true for Monday night’s episode, the battle that ensued between Supergirl, J’onn J’onzz, and the White Martian, as well as the scene where the White Martian escapes and destroys DEO headquarters, were certainly the most badass fight scenes that we’ve seen so far.

Of course, because this is Supergirl, this week’s monster wasn’t allowed to eat up all of the episode’s run time. The rest of the episode was thrown to a previously mentioned subplot involving Cat and her estranged son, Adam. It turns out that the touching letter Melissa Benoist voiced over at the beginning of the episode wasn’t from Alura to Kara, but instead from Kara pretending to be Cat to Adam. While I usually love any plot line involving Cat, this time it seemed a bit out of place, especially given the subsequent change in direction with Adam becoming Kara’s newest love interest.

Cat and Adam’s reunion, while touching, distracted from my real interest of the episode, J’onn J’onzz, not to mention the timely subplot that brought on that story, the realistically awful Senator Marana Crane – who, by the way, had the best line of the episode, “we need to figure out where they [aliens] live, what they do, and who they eat.” I literally LOL’d.

My biggest issue, however, with the Cat and Adam storyline was a question that I’ve had for quite some time now – what happened to Cat’s other son, Carter? We spent a whole episode with him not too long ago, and then they ceased to mention him, even when Cat first discussed Adam. Shouldn’t it be a pretty big deal that Cat has another son, particularly one that she didn’t abandon?

And then, of course, there was the issue that bringing on this new love interest so quickly after Kara rejected Winn seems way harsh. While Kara has been trying to give Winn time and space, I fear that seeing her with this new guy may steer Winn in a direction I’d hoped we’d already avoided last week. It seems cruel, especially when Winn is so great and adorable and, quite frankly, been shit on for too long by the writers of Supergirl.

Although I had my issues, much of the Cat and Adam storylines were redeemed, as usual, by Melissa Benoist’s acting. Some of my favorite work that Benoist does on Supergirl is when she acts dorky and flustered (maybe because it hits very close to home). So while I could have done without the distracting family drama – there’s an alien running around destroying your town, maybe Cat can wait – I was happy for the introduction of Adam if only to see Kara be relatably awkward again.

In the final few moments of the episode, Kara and Alex come across a live news story featuring Supergirl saving the day. After Alex and Kara establish that Kara’s definitely not there – “How are you there?” “I’m not.” Thanks, guys – my first thought was that it was one of the millions of other White Martians that we were promised existed. But thanks to next week’s preview my worry was abated, because it’s only the much-teased arrival of Bizarro-Girl. It seems like the writers of Supergirl are finally going places with their overarching storylines, first J’onn J’onzz this week, and now Maxwell’s evil plot next week. Let’s just hope they don’t kill off Bizarro-Girl as quickly as the other show’s monsters (metaphorically, of course; Kara wouldn’t even let J’onn kill off this week’s attacker, even though she totally deserved it).