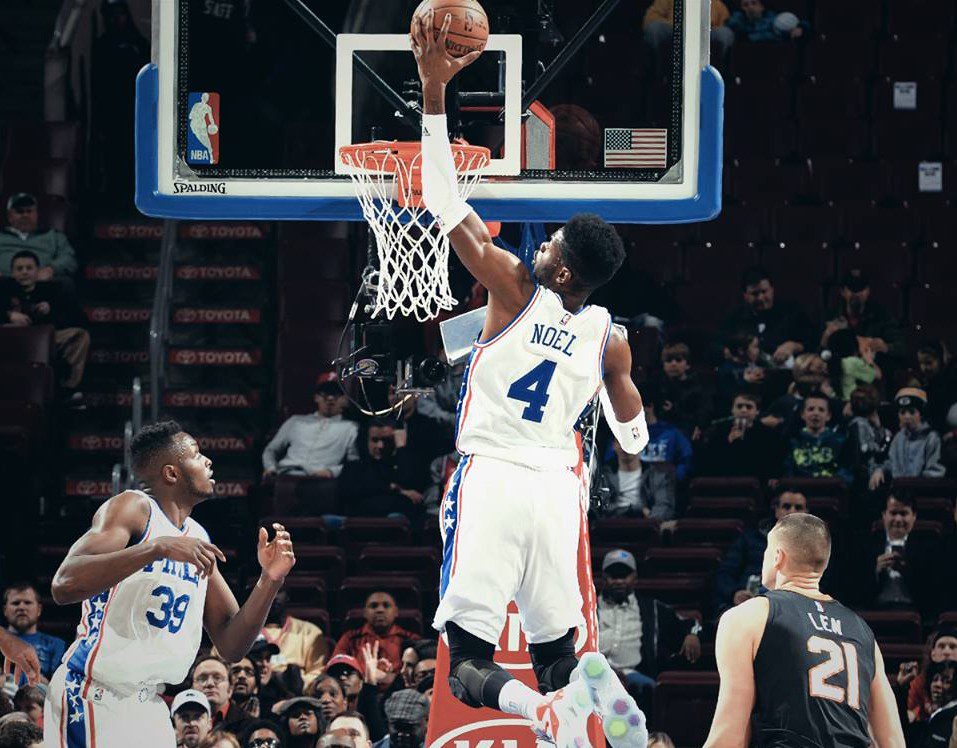 Undersized and out manned, the Philadelphia 76ers entered tonight’s game against the Phoenix Suns in pursuit of redemption after being blown out by the Celtics, in what Brett Brown called an “embarrassing” effort, two days before. Despite playing without their leading scorer, Jahlil Okafor (gastroenteritis), and defensive stopper, JaKarr Sampson (upper respiratory infection), the Sixers scored early and often as they took a double digit lead midway through the 2nd quarter behind sharp shooting performances from Robert Covington and Hollis Thompson. The Suns, though, coming off of an impressive victory over the Atlanta Hawks, wouldn’t go away quietly. After an Isaiah Canaan three-pointer put the Sixers up by 13, the Suns proceeded to go on a 12-2 run that brought Phoenix to within three with a little over two minutes remaining in the first half. In a desperate need of points, the Sixers, who were held without a field goal during this five minute stretch, eventually regained their rhythm by aggressively attacking the basket and drawing fouls. With contact, the sound of a whistle and sound free throw shooting, the Sixers snatched the momentum as they took a comfortable nine point lead (54-45) into intermission. Covington, who was forced to the bench after picking up his third personal foul with 6:50 remaining in the 2nd, led the Sixers with 11 first half points on three baskets from downtown. In a halftime interview, “RoCo” spoke confidently of his shooting ability, saying, “My teammates have been finding me, and I’ve just ben letting them fly.” Accompanying Covington on the scoreboard were Ish Smith, who scored seven, and Nerlens Noel, playing his natural center position in Okafor’s absence, who stuffed the stat sheet with six points, nine rebounds and three blocks. As a unit, the Sixers held a clear advantage in three point shooting (Phil: 6-16, Pho: 1-6), turnovers (Phil: 6, Pho: 9), points off of turnovers (Phil: 14, Pho: 4) and fast break points (Phil: 14, Pho: 6).

After the break, Philadelphia had little problem picking up where they had left off. Triggered by Smith’s innate ability to push the tempo of the game, the Sixers took a 19 point lead in the early minutes of the 3rd, and looked well on their way to victory, until Sonny Weems, a little used reserve, led the Suns on an 11-0 run in 1:40 that brought Phoenix to within eight. Weems, who is averaging only 2.3 points per game on the season, scored seven of the Suns’ 11 points during this stretch. The Sixers, though, unfazed by Phoenix’s quick push, would continue exercising their strengths. With one slash to the basket after another, Philadelphia upped their lead to 13 at the end of the 3rd and survived a 20 point 4th quarter performance from Archie Goodwin to secure the 113-103 victory; their seventh win of the season. Philly, benefitting from a sizeable 28-11 advantage in points off of turnovers and a gritty 50 points in the paint, had six players score in double figures. Ish Smith poured in a team high 20 points (7-17 FG), followed by 19 from Covington and another 15 from Nik Stauskas. Moments after the buzzer rang, a jubilant Nerlens Noel referred to his teammates as “junkyard dogs” and was complimentary of their unity, saying, “I think it was a great game for us tonight. We did a great job moving the ball; everybody was involved. It was a great team win. We’ve been coming out here playing out butts off every night. Despite certain games where we don’t come out, we’re resilient. We want to come out here and put a show on for the city of Philly and keep playing basketball.”

Playing with Injuries
Whether it’s bad luck or just the nature of the game, the Sixers had three more of their soldiers fall victim to the injury bug on Tuesday night. Coincidentally, all three of these injuries came in the 3rd quarter within a three minute span. Isaiah Cannan, already playing with sore wrists, fell to the floor with a sprained ankle with 3:02 remaining in the quarter. One minute and fifty-seven seconds later, Nik Stauskas suffered a left knee contusion after crashing hard to the floor off of an aggressive drive to the basket. Then, in the final seconds of the 3rd, Robert Covington, who took 15 shots, 12 of which came from three, was poked in the eyes after converting on a buzzer beating layup to end the quarter. Thankfully, all three players would return to action after receiving treatment in the locker room and played key roles in helping the Sixers close out their victory. After the game, Brett Brown commended his team’s toughness, saying, “I thought the toughness we showed without Jahlil and without JaKarr [was phenomenal]. Isaiah gutted it out with a solid 10 minutes and really helped us. I thought Nik came in and had a bounce to his game. He really had a little bit of a swagger going. Robert’s carried over his mojo a little bit with 12 [three-point] attempts. He ended up making five three’s out of those 12.”

Elton Brand
With Jahlil Okafor sidelined, Elton Brand was placed on the active list for the first time since signing with the Sixers on January 4th. Although he didn’t play, seeing Brand on the sidelines in his Sixers jumpsuit, instead of a suit and tie, was a welcoming sight for the nearly 11,000 fans in attendance. For those who remember, the last time Philadelphia saw him play was on Wednesday, May 23, 2011 in an 82-75 win over the Boston Celtics. In 34 minutes, the two time all-star, posted a respectable 13 points (5-9 FG) and a team high 10 rebounds against a physical Celtics front line composed of Kevin Garnett and Brandon Bass. After that season, Brand was amnestied by the Sixers and went on to play for the Mavericks and the Hawks before coming out of retirement for a second stint in Philly.

Game Notes
• Since defeating the Suns in their first meeting on December 26th, the Sixers have posted a 6-9 record compared to the Suns who are just 2-13.
• Robert Covington drilled five three pointers Tuesday night. Over his last six games, Covington has drained 26 three-pointers on 44.1% (26-59).
• The Suns, who rank ninth in the NBA in assists per game (20.7), assisted on each of their first 17 field goals. They finished with 27 on the night.
• Tyson Chandler, coming off of a franchise record, 27 rebound performance, was a nonfactor Tuesday night. In 19 minutes, he registered only five points (1-2 FG) and five rebounds.
• Former Sixer, Lorenzo Brown, made a brief appearance; going scoreless in three minutes of action. Brown, who played in 26 games for the Sixers during the 2013-14 season, is on his second 10-day contract after being called up from the Grand Rapids Drive of the D-League.
• Nicki Minaj was in attendance to watch the Sixers capture their seventh win.  Sitting court side with boyfriend, Meek Mill, Minaj looked focused on everything except for the game itself.  “Every time I looked over, she was looking at herself in the mirror,” said Nik Stauskas.  “I don’t think she was really watching the game today.”
• The Sixers next game will be at the Palace of Auburn Hills to take on the Detroit Pistons on Wednesday at 7:30 PM.