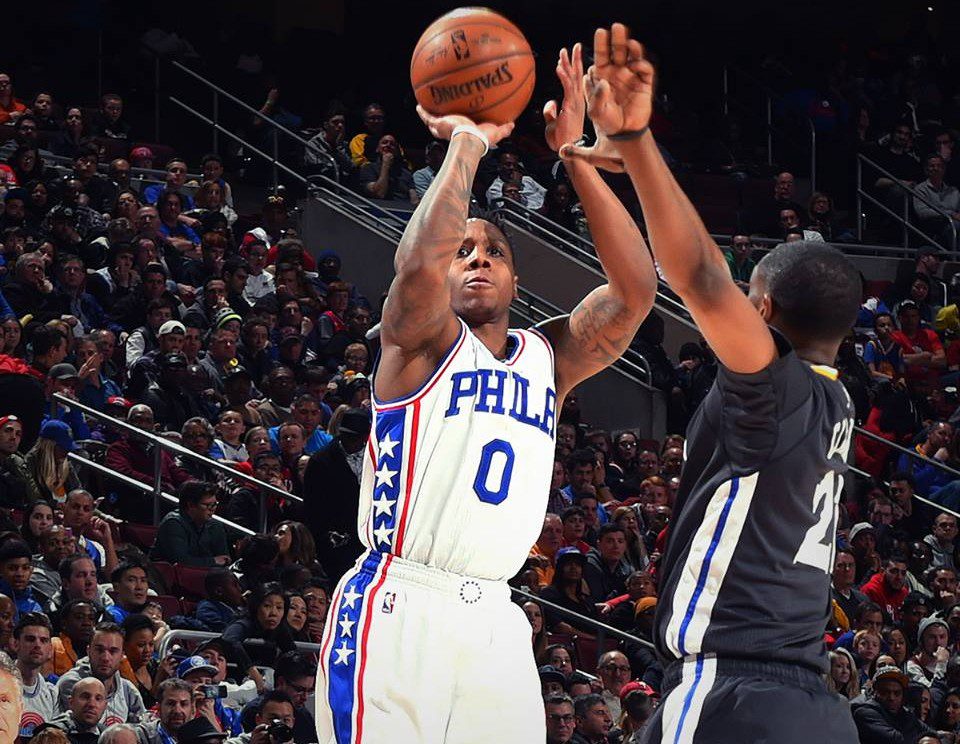 When the final buzzer rang and the clock struck zero, the 76ers exited the court to a standing ovation from the thousands who had flooded downtown Philadelphia with a ray of hope that their beloved Sixers could vanquish the immortalized Golden State Warriors. In a battle of David vs. Goliath; Brett Brown had told his troops that while record and recognition would determine fan attendance; grit, grime and a go-getter’s intensity would determine the outcome. Playing with both feet on the gas pedal, the Sixers took an early seven point lead in the 1st quarter, until Klay Thompson, almost single-handedly, led Golden State on a 15-0 run that helped the bumped the Warriors lead to as many as 11 in the opening period. In the 2nd, the offensive onslaught from the NBA’s highest scoring team (115.0 ppg) would continue. Due in large part of their ability to space the floor and move the ball with ease, the Warriors used a well balanced inside (40 points in the paint), outside (27 points from the perimeter) to take a commanding 73-54 lead into the break. Amazingly, the Warriors, who also lead the league in with 29.3 assists per game, registered a franchise record 26 helpers on 32 first half baskets. Klay Thompson, coming off of a 45 point game in a win over the Dallas Mavericks, led the way with 21 points, followed by Steph Curry who scored 13 and Draymond Green who added 10. On the other hand, the Sixers, in an effort to play small, took a perimeter oriented scoring approach in the first half with mixed results. Isaiah Canaan drilled all four of his three-point attempts for 12 points. Nik Stauskas reached double figures with 10. But with Jahlil Okafor playing off the bench, the Warriors were able to take full advantage of Philly’s lack of size down low; hence, why the Sixers were outscored by 20 in the paint.

After the break, the Warriors had little problem picking up where they had left off. Leading by as many as 24 points, Curry and Thompson headed to the bench in what looked to be an early night off for the two superstars. The Sixers, though, had different plans. Fueled by their tenacious defense and a resiliency, not indicative of their record, Philadelphia used a 14-4 run in the final minutes of the 3rd and an 11-2 spurt in the beginning of the 4th to narrow the deficit to 10. To stop the bleeding, Steve Kerr reinserted his starting unit back into the game, but to no avail. With under a minute remaining and the 76ers trailing by six, the fearless Isaiah Canaan drilled a three-pointer from the left corner and was subsequently fouled by Curry; giving Canaan a four-point play to bring Philly within two. On the very next possession, Ish Smith stole the ball from Curry near the half court line and raced down the court for a one handed jam to tie the game at 105 with 22.3 seconds left.

Electing against a timeout, the Warriors walked down court where Draymond Green found Harrison Barnes for a wide open corner three that heartbreakingly sank through the bottom of the net, giving the Warriors the 108-105 win, their 43rd of the year. Klay Thompson led all scorers with 32 points (14-26 FG), followed by his backcourt mate Curry, who scored 23 (9-19 FG). As for the Sixers, a team with only seven wins and no playoff aspirations, the end result, while painful, was a representation of the growth, dedication and perseverance that Brett Brown has alluded to all season. “For us to be down 24 and find a way, at home, to now roll over, not get caught up in the moment and find a way to give something back to our fans, who were fantastic, is a great thing for our young team,” said Brown. “As I’ve said a few times, it validates the work they’ve put in, it shows we don’t back down and I give us a lot of credit. But we’re obviously disappointed to not come away with a win.”

Strapping Down on Defense
Following 73 first half points, the Sixers held the Warriors to an unbelievable 35 points in the final 24 minutes of the game, including only 17 in the 4th on 6-23 shooting. The difference, according to Robert Covington, was “intensity.” The Sixers, continuing to play small, despite allowing 40 points in the paint in the first half, ran a three guard set; allowing them to better match Golden State’s speed and agility. With quick feet and active hands, the Warriors, usually efficient offense, looked flustered. After assisting on 26 baskets in the first half, the Warriors were held to just 11 dimes in the second. The Sixers also forced the Warriors into 23 turnovers; making it just the eighth time all season that Steve Kerr’s crew has committed 20 or more blunders. Steph Curry and Draymond Green both committed seven, followed by Klay Thompson who had five. Most astounding of all, Philly committed only eight personal fouls; resulting in just two free throw attempts for the Warriors over the course of the entire game. When asked about their halftime adjustments on the defensive end, Brett Brown said, “I think that our switching helped us. I think going small helped us. I think getting more physical helped us. We generated 18 steals. We created 23 turnovers. I don’t remember being a part of any NBA game where [a team] came in and shot two free throws. I think it was our switching, our speed, we were tenacious and created a high volume of turnovers. I think it all added up to being solid defensively. Holding them to 35 points in the second half is a hell of an effort.”

Familiar Faces in Different Places
Despite their career’s taking completely different paths, Ish Smith and Steph Curry began their basketball journey on a similar note. Both born in 1988 and raised in North Carolina, the two spent time as AAU teammates on the Charlotte Stars during their teenage years. Since then, Curry has risen to the top of the NBA as a champion and league MVP (2015), while Smith, having bounced around nine different teams in six seasons, has finally found a home in his second stint with the 76ers. After the game, Smith, who finished with 16 points (7-19 FG) and nine assists, had high praise for his former teammate, saying, “Steph is the best player in the world. He’s playing at a very, very high level. Obviously, we had one of our best defenders, probably the best defender to me; a top five, top ten defender in the league in Nerlens guarding him. But sometimes good offense beats good defense.”

Another familiar face on the Warriors bench was former Sixer, Andre Iguodala, who was drafted by the team in 2004 (9th overall) and spent eight seasons in Philadelphia before being traded to the Denver Nuggets in the summer of 2012.  Known best for his all around game and highlight reel dunking ability, Iguodala averaged 15.3 points, 5.8 rebounds and 4.9 assists in 615 games with the Sixers and became a regular during all-star weekend; winning MVP honors in the 2006 Rookie Challenge, placing second in the Dunk Contest a day later and making an appearance in the all-star game as an Eastern Conference reserve in 2012.  Due to rest, Iguodala did not play against the Sixers, but plans to suit up on Sunday when the Warriors head to Madison Square Garden to take on the Knicks on Sunday.

Game Notes
• The Sixers had seven players score in double figures: Isaiah Canaan (18), Ish Smith (16), Jahlil Okafor (13), Robert Covington (12), Hollis Thompson (11), Nik Stauskas (10), Jerami Grant (10).
• Playing off the bench, Jahlil Okafor scored 13 points (6-7 FG) in 21 minutes.
• The Warriors, who scored 40 points in the paint in the first half, finished with 58.
• Golden State (73 points) scored over 70 in a half for the seventh time all season.
• Before sinking the game winning three-pointer, Harrison Barnes was only 3-10 from the field. He finished with 11 points and six rebounds in 34 minutes of action.
• The Sixers next game will be at home against the Atlanta Hawks on Wednesday at 7:00 PM.