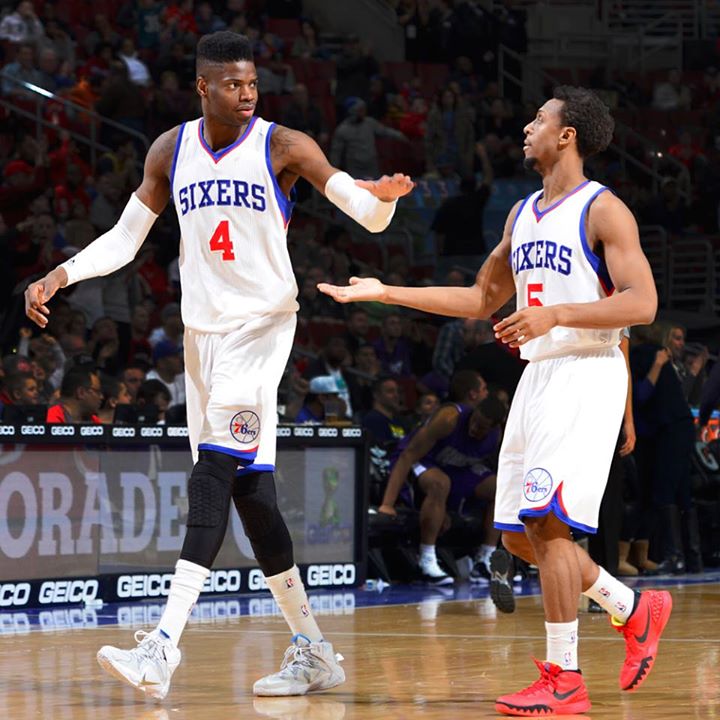 A collection of post-game quotes following the Philadelphia 76ers’ loss to the Golden State Warriors.

BRETT BROWN
On 108-105 loss
“For us to be down 24 and find a way, at home, to now roll over, not get caught up in the moment and find a way to give something back to our fans, who were fantastic, is a great thing for our young team. As I’ve said a few times, it validates the work they’ve put in, it shows we don’t back down and I give us a lot of credit. But we’re obviously disappointed to not come away with a win.”

On halftime adjustments
“I felt like the physical side of the game overwhelmed us at the start. We were pushed around. I thought that we didn’t finish plays at the rim. I think [after halftime] we started combining the physical side with the things we had talked about tactically and technically on how to guard them better and they did. I think the game changed when we brought in Isaiah, T.J. and Ish, and we started playing three small guards who amped up the speed. But I think that our defense picked up in the second half from a more physical perspective.”

On containing the Warriors in second half
“I think that our switching helped us. I think going small helped us. I think getting more physical helped us. We generated 18 steals. We created 23 turnovers. I don’t remember being a part of any NBA game where [a team] came in and shot two free throws. I think it was our switching, our speed, we were tenacious and created a high volume of turnovers. I think it all added up to being solid defensively. Holding them to 35 points in the second half is a hell of an effort.”

On double teaming Curry on the final possession
“We have a thing we call the ‘anybody but’ rule; anybody but Dirk [Nowitzki]; anybody but Kobe [Bryant]; anybody but [Kevin] Durant; anybody but the MVP. To have Curry walk down a game is not how we’re going to leave this gym. So we went after them. We knew we had a foul [to give]. We tried to be aggressive on the blitz and the pick and roll. We got switched out. I called Ish over there to get it out of Curry’s hands. I don’t have any remorse.”

ROBERT COVINGTON
On come back attempt
“Coach just told us that we have to come out in the second half and be more physical. We have to dictate the game and play the style of basketball that we normally play. We took a punch from them in the first half, but we responded back and that’s what Coach wanted us to do. That’s what gave us the momentum and that’s what gave us the run that we were able to come back with.”

On playing through the 24 point deficit
“We know they’re going to make plays and we know they’re a good team, so we have to have the resiliency to bounce back. That’s the one thing we did tonight that was a big key for us. We didn’t get rattled. We didn’t get disturbed or anything. We just played it out and good things came from it. We made good plays. We found opportunities. We found Nerlens on a lot of rolls and Ish got to the rim. It was a lot of that and plus the crowd being into it was [great] for us. It added more momentum for us and we just went on from there.”

On halftime adjustments
“Just being more aggressive. Coach told us in the second half that we have to dictate and we have to make them feel it [defensively]. That’s one thing that we did. For us to come out and respond the way we did shows what we’re capable of as long as we do it.”

On what sparked their come back
“Our intensity. That’s what we have to continue to do. We played a full 48 minutes. Coach has always preached for us to play a full 48 minutes and tonight was one of the games where we came out and did that.”

On lessons learned despite the loss
“We learned a lot. They’re the number one team in the league. They’re by far one of the greatest teams in league history, but for us to come out and play the way we did shows that none of that really matters. They have to strap up their shoes just like we do, so when we come out on the court we can’t be star struck or anything. We have to come out and play, and that’s the one thing we did tonight. They made a few runs and got up big, but we came out and had the resiliency and fight within us to have the run that we had to get back into the game.”

On team’s mindset after the game
“We’re competitors, so we think that we should have won the game. That’s how everyone [in the locker room] thinks. That’s how they should think. We didn’t have enough time to win the game. We kept pushing and kept pressing, but like I said, they’re the defending champions for a reason. Draymond [Green] made a great play and Harrison Banes hit a big three. That’s how the game goes sometimes. There aren’t any sympathetic pats on the back or anything like that. We just lost a tough game.”

On Warriors ability to shoot
“Their three [pointers] multiply. It’s crazy. Some of the games I watch, it’ll be a five or six point game with eight minutes to go and before you know it, six or seven three’s later you’re down 20 and now you’re in a hole. Steph [Curry] just missed some shots that he usually makes. I missed some shots that I usually make. It was an overall good game. The fans were electric. It was just a great atmosphere. I thank the Philly fans for coming out and really supporting us.”

On Stephen Curry
“Steph is the best player in the world. He’s playing at a very, very high level. Obviously, we had one of our best defenders, probably the best defender to me; a top five, top ten defender in the league in Nerlens guarding him. But sometimes good offense beats good defense.”