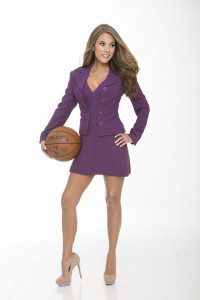 Bonnie-Jill Laflin has done it all. Check out her Instagram page — with all her great work last week at the Super Bowl. There is no stopping her.

The BMF had a few minutes with Bonnie-Jill for our celebrity Q and A:

Lynn Hoppes: Let’s start with the NBA. What has been the most surprising thing to you as we hit the midseason this week?

Laflin: The Golden State Warriors and their open quest to break the Bulls’ 72-10 season and how Stephen Curry is even better than last year’s MVP season.

Hoppes: The Warriors are an amazing team, but do you still think they don’t get respect because they are West Coast and from a small market?

Laflin: Last year, perhaps. But this year I think cements their style of basketball is here to stay. Steph is global, and the Warriors are the NBA’s biggest draw now.

Hoppes: Face it, all of us are getting older. But why do you think the San Antonio Spurs continue to excel year after year?

Laflin: It’s Gregg Popovich and the Spurs’ way. Their style of basketball fits any era.

Hoppes: Do you like parity in basketball? Do you wish the superstars would be spread out to outlying teams?

Laflin: There are superstars are on every team. Social media and mobile apps makes the players more reachable.

Hoppes: You’ve always loved the game. How much scouting do you still do?

Laflin: I left the Los Angeles Lakers when Phil Jackson did, so no longer scout but come on as an analyst for many TV and radio networks.

Hoppes: You have a special attachment to the Los Angeles Lakers. What are you thoughts on Kobe Bryant’s legacy?

Laflin: It’s extra special when you can see someone you’ve known a long time accomplish all that he has in a long lasting legacy. I’m still amazed after all those years in the league, that during training camp I would see first-hand Kobe outwork and outhustle every player during every drill and every scrimmage. No one can outwork Kobe from his work ethic to his intensity and passion for the game. It’s gonna be hard not seeing him on the court. I might get teary eyed watching his last game. We all know he goes down as one of the best of all time! There will never be another Wilt Chamberlain, Jerry West, Kareem Abdul-Jabbar, Magic Johnson, or Michael Jordan. And there will never be another Kobe Bryant.

Hoppes:  You also have been a former cheerleader. How different is cheerleading today compared to when you did it?

Laflin: I cheered for the Golden State Warriors, San Francisco 49ers, and Dallas Cowboys and for me it was for the the love of the game. Being a part of organizations that I grew up loving. I was cheering for championship teams with the best seats in the house … with little pay. Now girls are more concerned about making money.

Hoppes:  You are true blue San Francisco Giants fan with your dad. What has it meant to you to enjoy a sport with your father?

Laflin: As a true ‘daddy’s girl,’ I’ve been going to Giants game with my dad since I was two-years-old when they were playing at Candlestick. He always said he wanted to see the Giants win a championship before he dies so it was pretty special bringing him to all the playoffs, World Series games and seeing them win three championships!! My dad and I bleed orange and black! I’m blessed to have such an amazing relationship with my dad!

Hoppes: You also are big into animal rights. You are changing people’s minds. What does that mean to you?

Laflin: I’m always trying to educate people on this issue. It’s always been instilled in me as a child to speak up for the voiceless … and that’s what I’m doing. As an animal activist, people may not always like what I have to say but I stand up for what I believe in.

Hoppes: You are very supportive of the troops as well.

Laflin: My whole family is veterans, so I’ve seen the sacrifices they have made. Freedom isn’t free, and it’s a passion of mine to let our heroes know they are appreciated. I’ve done 18 USO visiting our troops (including eight to Iraq and Afghanistan), constant visits to veterans hospital and assisting our wounded warriors to show my gratitude.

Hoppes: Tell us about your charity.

Laflin: I formed my non-profit, “Hounds and Heroes“,in 2010 to combined both my passions of supporting our troops and animals welfare. Our biggest initiative now is pairing up shelter dogs with wounded warriors struggling with PTSD, TBI, and amputees. We are put on this earth to make a difference.

Hoppes: You’ve accomplished a lot. What else is you there for you?

Laflin: You only live once so I believe in living life to the fullest. Currently I’m a reporter for FOX Sports, BBC Sports, and Muho TV (NBA Sports network in China). I have a new pilot for both NFL Network and the Travel Channel. My long-term goal is to own a sports franchise. Dream big!